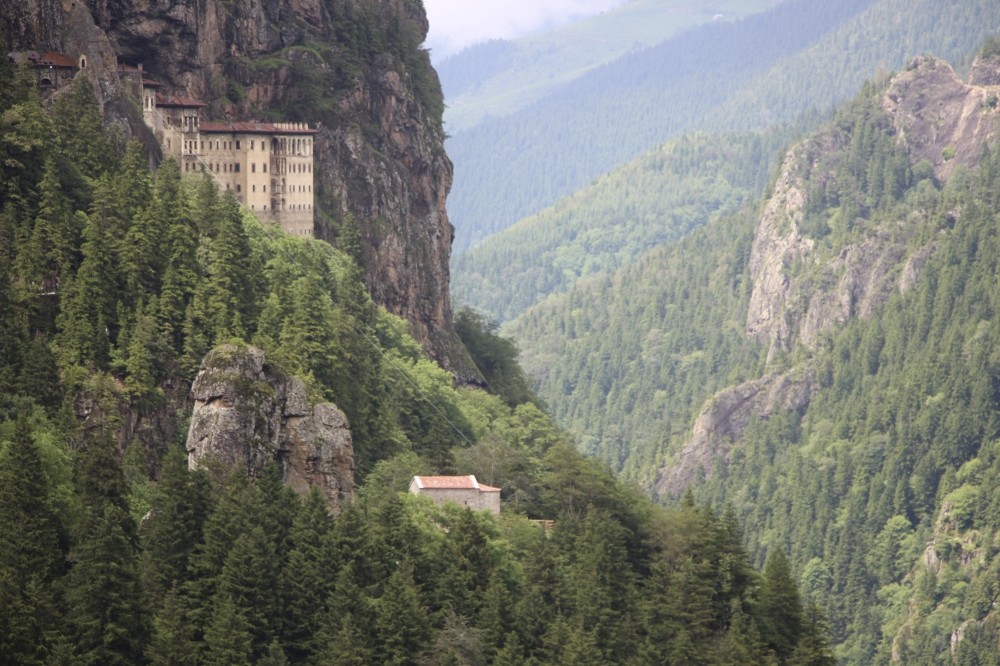 The monastery offers stunning views of the evergreen forests that surround it and the ethereal beauty of nature.
by Anadolu Agency Jul 12, 2017 12:00 am

Poised on the steep hillsides of Karadağ, the historic Sümela Monastery offers a bird's-eye view of Trabzon and will soon be visible from new observational decks being constructed in the area

The historical Sümela Monastery in the Maçka district of Trabzon province will soon be visible from new observation decks that are slated for completion with the support of the Ministry of Culture and Tourism.

Home to one of the world's most important holy sites of the Christian faith in Turkey, the Sümela Monastery is one of the most highly frequented spots for tourists who visit the area.

The monastery was temporarily closed to visitors while undergoing stone improvements and restoration works but continues to offer stunning views of the evergreen forests that surround it and the ethereal beauties of nature that are available to visitors. The monastery is considered a hub for history buffs, cultural tourism and horticulturists alike.

In the scope of a project organized by the Directorate General for Nature Conservation and National Parks and the Trabzon Directorate of Culture and Tourism, construction has already begun for four main observation decks in an area that is considered ripe as a destination for alternative or faith-based tourism.

Under the auspices of the project which is expected to cost around TL 4 million ($1 million), the bidding process has already been completed and the Sümela Monastery is expected to offer visitors a brand-new perspective on faith-based tourism.

Maçka Mayor Koray Koçhan spoke to Anadolu Agency and said that Maçka district has provided tourism for years with its history that dates back 4,000 years, unique culture and stunning, natural beauties.

Stating that the monastery and churches in the area are prominent sources of tourism in the district, Koçhan noted that the Sümela Monastery leads the pack in terms of tourism among other religious sites.

Koçan reiterated that the Sümela Monastery has been temporarily closed to visitors while stone improvements and restoration works were being completed, adding that for this reason they had considered a number of alternatives for tourists in the area.

Pointing out that the Hagia Varvara Church, which is located beneath the pathway and integrated with tourism by the Ministry of Culture and Tourism in recent months, attracts the attention of local and foreign tourists alike, Koçhan said, "The Hagia Varvara Church offers visitors an opportunity to see the monastery in a three-dimensional way while also observing the monastery from a distance. The heavenly, natural beauties of the region are sure to mesmerize visitors."

Four viewing terraces to be constructed

"We plan to construct four viewing terraces that will offer stunning views of the Sümela Monastery. One of the terraces will be made of glass. The viewing terraces, evergreen forests and splendid scenery will give this historical monastery in the foothills of Karadağ; a captivating aura that is sure to attract local and foreign tourists," Koçhan said.

Koçhan also noted that construction for two of the terraces has already begun and the region is ready to host tourists.