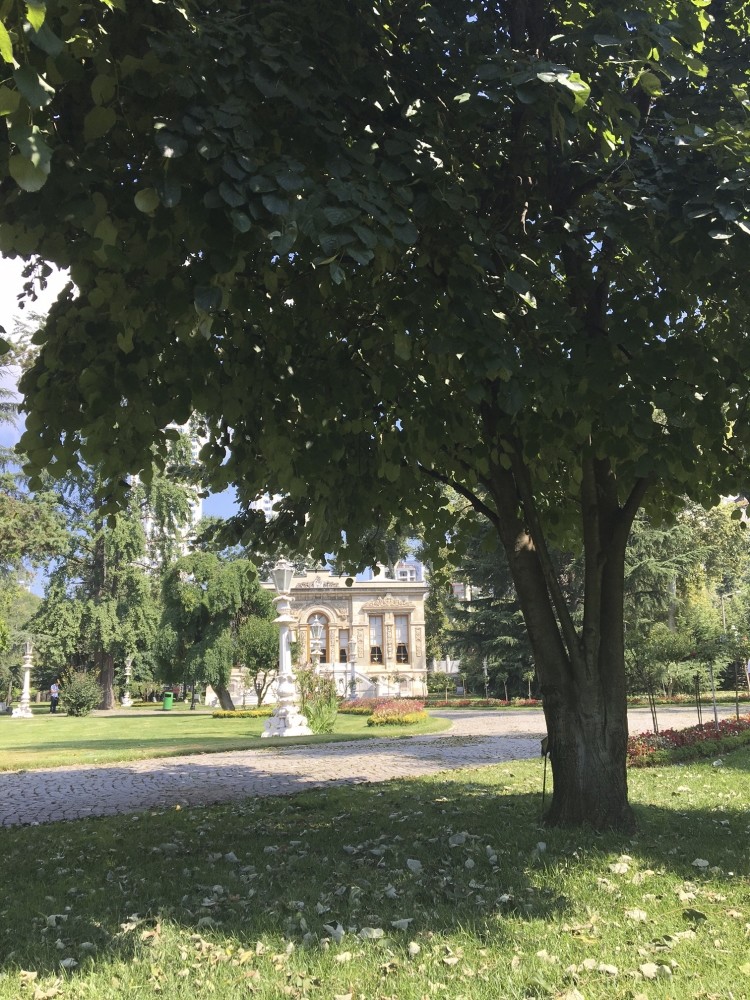 Within the Ihlamur Kasru0131 palace grounds, broad-leaved and silver lindens are surrounded by a stunning panorama of biodiversity that preserves the bucolic utopian fantasies of the early 19th century Romantic Age.
by Matt Hanson Aug 02, 2017 12:00 am

A video of the late July floods appeared online from downtown Istanbul with a clever tag. It read Ihlamur ‘dere,' as a piece of wordplay on the main artery in Beşiktaş, called Ihlamurdere, which from the Turkish, literally means Linden Stream. The video shows the power of rainclouds over the city while recalling the now mostly forgotten premodern, urban landscapes when blossoming grove-lined streams flowed from all directions through what is now Istanbul ‘s urban landscape

Modern life is made up of tiny fragments of time: secondary videos, hourly meetings, daily assignments, weekly forecasts, monthly bills, yearly vacations. The experience of time is relative to the frequency of its measurement.

Floods can be described as time lapses, mythic and beyond the scope of human direction. They have the power to remind people of the natural clock that once measured human communities in the building blocks of existence: births, puberties, marriages, children, and deaths. Along with the related self-destructive tendencies of the earth, floods recalibrate and disrupt human lives and cities with abrupt transformations that, while seemingly untimely and at worse tragic, are as natural as the air.

More importantly, floods reconnect people to the pace of prehistory. When the earth floods, time seems to rush as fast as the onslaught of water, emphasizing the special relationship between the prevailing human infrastructures, be they farms or cities, and the local waterscape.

The 110mm of rain that fell on Istanbul and Ihlamurdere Avenue in Beşiktaş district through the afternoon of July 18 signaled an organic interval of 32 years, drenching the city in volumes of rainfall unseen since 1985. Nine days later, half of the local July rainfall average fell from the sky, punctuated with crystal-form, jagged 9 cm-wide hailstones that tore at the noses of planes gripped with emergency landings. Countless roofs and windows were riddled with dents and fractures on the ground. 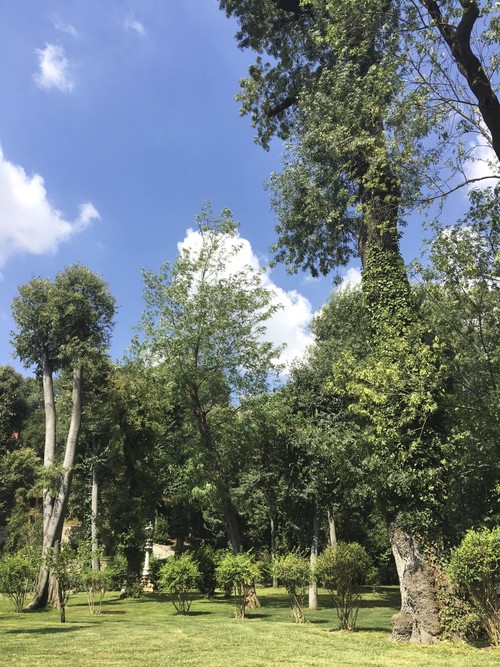 Ihlamurdere Avenue marks a path where nature and the city merge into a unique, and arguably distinctly, Turkish manifestation of the urban ecology. Once flowing into the Bosporus by the recently restored Naval Museum facing Barbarossa Square and Beşiktaş pier, it is said that an ancient riverbed lies beneath the pavement in the Ihlamur Valley between the Yıldız Hill and the neighborhood highlands of Nişantaşı and Teşvikiye neighborhoods. Its streams descended steeply over the graffitied sidewalk stairwells of Topağacı quarter from the lavish precinct of Şişli district, where the contemporary palace is an apartment suite in the city's most expensive real estate market

Vestiges of the inner-city waterscape ecology are underground in Beşiktaş, paved over by Muradiye Deresi and Fulya Deresi Streets, both named after the Turkish word for stream: "dere." They intersect at the rotary where Ihlamurdere Avenue begins, running through World Peace and Azerbaijan Friendship Parks, once all part of the Ihlamur Kasrı palace grounds, into what is now one of the busiest nightlife and cafe districts in Istanbul.

Ihlamurdere Avenue is equally named for its stream of linden trees. ("ıhlamur" means "linden" in Turkish.) Linden trees live as long as a millennium, just like the plane trees that grow alongside them on Ihlamurdere, shading the many caffeinated pedestrians cooled by a walk on the shady avenue. The linden trees that grow in Turkey are only two of thirty varieties. They are known to naturalists as "Tilia platyphyllos," commonly large-leaved linden and "Tilia tomentosa," the silver linden, both of which are cultivated at Ihlamur Kasrı (Pavilion). 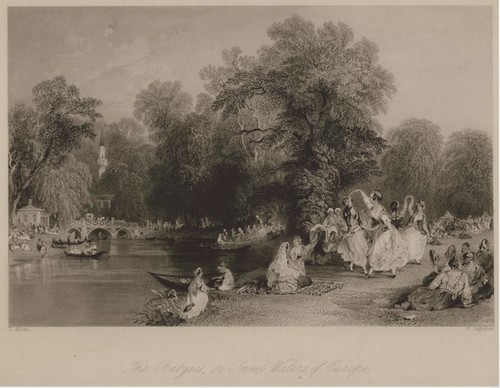 In the mid-19th century, linden trees were fast becoming central to the Ottoman Turkish culture under the famous sympathizer to European style, Abdülmecit I. At the time, the Turks were invading Slovenia, a Balkan nation known to venerate linden trees as part of its folklore. Many trees in Slovenia bear the name "Turkish linden," as locals swear they stand where Turks were defeated.

The Sultan had plans for Ihlamur Valley. He remembered the vale from his boyhood as the Hacı Hüseyin Vineyar

ds, with its rustic, wooden hunting lodge. He commissioned the renowned Balyan family of Armenian architects to replace the lodge with Ihlamur Kasrı after they had completed work on Dolmabahçe Palace, and to link the newly Europeanized Ottoman sphere of influence with a three-kilometer coach road.

It was all part of his plan to urbanize Constantinople westward as the city population doubled in the 1800s to nearly a million by the turn of the century. In the process, he moved the entire cultural and political nexus of the Ottoman dynasty, literally, from old Istanbul centered in Topkapı Palace, to Beşiktaş.

Ihlamur Valley became a gateway to the European wilderness beyond the hunting grounds of its new palace. The imperial works were designed by Nigoğos Balyan as an opulent pair of pavilions in French Baroque, Rococo and Orientalist styles, surrounded by elegant gardens that echoed into the present with a world-class arboretum and strutting peacocks.

The French poet and statesman Lamartine was one of the many distinguished guests at the Ihlamur Pavilions. He had the special privilege of seeing the countryside and its civil infrastructure transform. In 1850, he described its first structure as a cottage fit for an impoverished priest, nothing resembling a palace.

In five years, the pavilions opened and the Sultan and his many esteemed guests were off practicing archery at rich picnics furnished for Balkan leaders who watched as silver-collared mastiffs and greyhounds caught wild rabbits. Returning to repose at the Linden Tree Mansion, guests drank the palace-favorite linden tea aplenty before soaking in medicinal, fragrant baths full of the sedative linden blossoms that continue to burst around the palace seasonally from June to July.

"If one had but a single glance to give the world, one should gaze on Istanbul," wrote Lamartine, one of his most classic turns of phrase that evokes the proud agrarian heritage of the late Ottoman capital, which he compared to the illustrious Bay of Naples, a comparable pearl in the eye of many great European artists.

In old photographs of Ihlamur Kasrı, the white ceremonial pavilion contrasts brightly against a landscape of forests and hills, and a winding road that disappears into a grove of lindens. The source of the Ihlamurdere stream once flowed past Linden Palace from the slopes of Nişantaşı as Muradiye Stream, and from Yıldız Hill as Fulya Stream, forming its headwaters by the palace gate.

Nowadays, beyond the overburdened urban crowds in Beşiktaş, there are still waterscapes in greater Istanbul that mirror the bygone wetland, arboreal ecology of Ihlamurdere. One such stream is Kurbağalıdere in Kadıköy, on the Anatolian side of Istanbul, which inspired the 20th-century Turkish artist Hikmet Onat

Far inland beyond the European Bosporus, yet within the metropolitan region of Istanbul, the waters of Kağıthane have the distinction of an ecological continuity with Ottoman times. While not exactly still frequented by fez-wearing oarsmen, the urban waterscape is intact, reminiscent of the bygone wetland map of pre-modern Constantinople, or indigenous Mexico City, as a more contemporary example of its ancient predecessor Tenochtitlan, now partly preserved by the touristic Venice-like canals of Xochimilco.

One of the most lucid drawings of the waterscapes of old Constantinople is dated to 1838. It is an engraving signed by P. Lightfoot after a drawing by Thomas Allom, titled, "The Barbyses, or Sweet Waters of Europe." It shows a forest-covered minaret downstream from picnic parties in the foreground filled with merriment. Women twirl each other to the music of fellow female percussionists, and everyone is adorned in multicolored, frilly dresses over a green and liquid utopia of tree-lined, architecturally glorified shorefronts.

Such romantic depictions merit basic skepticism over sheer captivation, yet if the fact that countless streets in Istanbul are named after streams is any indication of its pre-modern waterscapes, then the city was truly rich with a fluid heritage that went well inland, flowing alongside lindens and groves of all kinds, where people sailed, feasted, romped, hunted and, at times, drowned in its everlasting and irrepressible nature.