Prague: Where the past mingles with the present 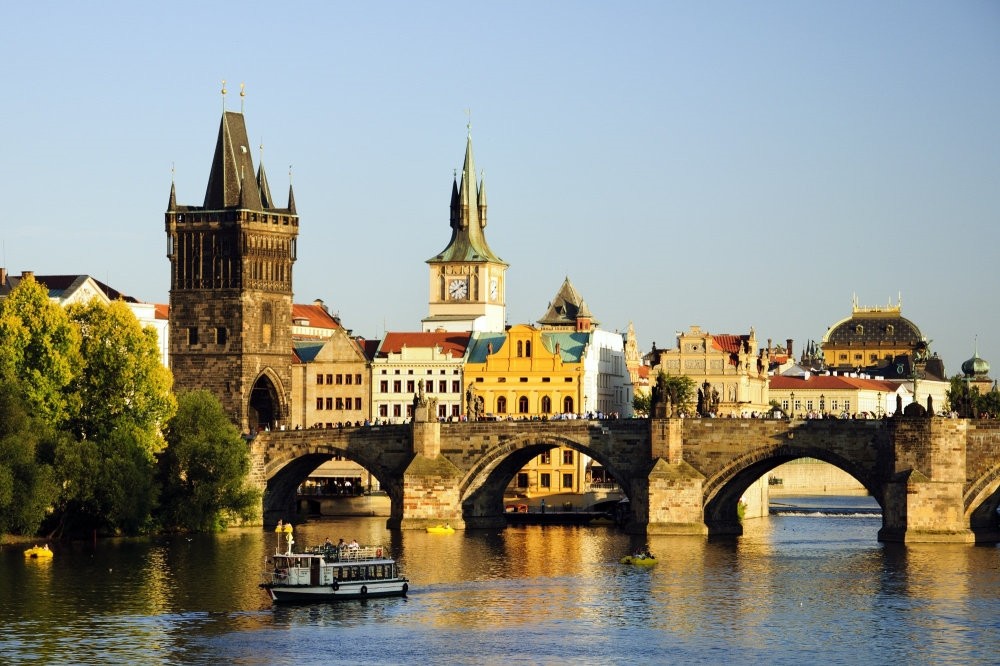 Prague is surely the center of life in Central Europe with its history, art, architecture, cuisine and sunsets that mesmerize its visitors

Somehow, after years of living in Europe, I'd completely missed going to Prague. Mostly, I think the many tales I'd heard of British lads on their blurry holiday bachelor parties kept me away. But to my untutored mind, Prague always conjured up the image of fading decadence, the stain-glass inspired art deco posters of Alfons Mucha, the green fairy and festive cabarets. Isn't it interesting, how our brains create these weird little impressions of places before we've ever been there or read anything substantive about a place?

I found Prague thriving, a pulsating center of life in central Europe. There was nothing fading about its decadence. It was dense with architecture, gothic cathedrals and spiky turrets packed in as tightly as a deck of cards. Statues of kings and queens and Sigmund Freud loomed at me wherever I went. It was a joy to just wander and feel utterly enveloped in centuries and centuries of history. Prague had plenty of good times, and you can see it in the staggering variety of flashy facades from block to block. I was lucky to arrive at sunset, and as we walked from neighborhood to neighborhood, I kept saying, "wow!" without irony or awareness as some new thing caught my eye. A spindly spire, a water wheel in a canal, a giant public sculpture; a castle wall against the orange and purple sky. I felt at turns hemmed in and totally open in the fractal city.

And in the midst of this catalogue of historical architectural styles, we found the Dancing House. Not an arts center where people take dance classes, but a block of towers veering crazily to the right, designed by Vlado Milunic and Frank Gehry. The building's steel columns skew diagonally, and the floors and windows seem to dance along the wall. Up is down. Left is right. Stop is go. Where are we? 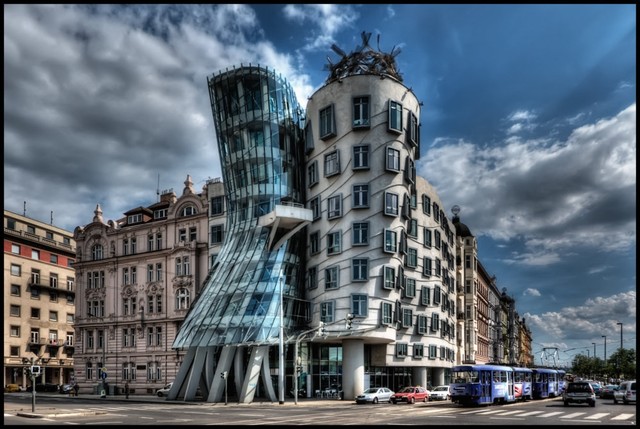 Prague is clearly a city that appreciates its artists. An example: We found Franz Kafka's giant segmented head in a public square. Each of the mirrored horizontal cross-sections rotated and came together at different speeds, so you found yourself hypnotized, waiting for all of them to come together at the right moment and make a real head. I think this was supposed to be a play on how the author had twisted ideas. Kafka was a Czech author who wrote in German in Prague, and the city honors him with both the sculpture and the Franz Kafka Museum.

Speaking of museums, there were too many to count, including the rather ghoulish Museum of Medieval Torture Instruments; we ended up going to a tripartite exhibition of Dali, Warhol, and Mucha at the GOAP gallery. My girlfriend Harriet studied Andy Warhol, another Czech artist, by way of the U.S. while she was in university, and she was eager to get a look at some of his silkscreens.

And the Lennon wall, down in the Kampo section of town, was crisscrossed with bright graffiti. In the '80s, students began writing messages of peace and love. The Communist Party cracked down, and someone made the Leninism-"Lennonism" pun connection and painted a mural of John Lennon's face. Since then the wall's been painted over many, many times, with the same spirit of love and peace.

The heights of stony-building pleasure can be found on the Charles Bridge. Most of the baroque statues on the stone bridge are replicas now, but the bridge still stands as a great example of the city's prestige, more than seven centuries old. Crossing the Charles Bridge, however, is challenging at any hour. It's packed with tourists from every country across the globe, day and night. Talented musicians, usually playing tango, central European polkas, or acoustic versions of ABBA, post up on either edge of the bridge to jingle their way through the hits and inevitably, a crowd forms, further slowing foot traffic to a sluggish flow, like a wad of cholesterol blotting up the arteries of the hugely obese. Sketch artists plop down and hang great displays of caricatures or more detailed portraits, and how else to get a good portrait other than putting a chair way out in the three meters of available walking space and not move for half an hour? Tourists and locals alike hop up on the walls of the bridge to watch the eternal back-and-forth of boats and swans. Prague has a great deal of swans. 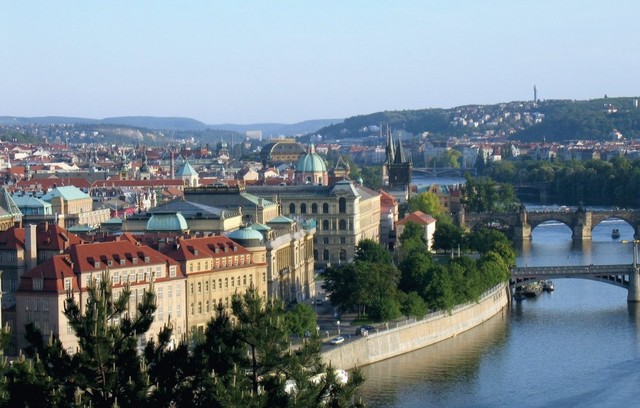 The best place to get a good view of the city is Letna Park. Letna Park looms above the northern bank of the Vltava River, just across from the old town, one bridge right of the Charles. If you climb the steps all the way to the top, you'll see a group of students hanging out, lounging on the steps and sharing drinks from the park's cafe. Kids skateboard all around a concrete plaza that used to have a huge statue of Josef Stalin until it was torn down in 1961. Now the highest point in the park is a huge sculpture of an unmoving metronome, built in 1991, which you can sit underneath and take in the view of the whole city.

While the sights made me feel dwarfed, the food made me feel bloated and weird. Try as I might, I found that traditional Czech food offered in most restaurants in the city center involved boiled or fried lunch meats served with creamy tomato sauce or just a huge fried pork hock, which is to say, I found it pretty uninspiring. Normally when I leave Istanbul for a spell in Europe, I'm excited by easy access to cheap pork products. Here, it was just blah. Sausages were no better than cheap franks, ham was just above SPAM in quality, and salami often left me feeling greasy. I realize that a lot of this has to do with staying in the touristic old town (which, in my own defense, is larger than any other historic town I've ever wandered in, and it's pretty hard to get out of). But still. I most enjoyed European classics: espresso, pizza, croissants, omelets, sandwiches and Vietnamese noodle soup. I'm sure Prague has its share of high-concept havens for gourmands, but I am a budget traveler, and I review the budget food. If day-to-day food isn't worth writing home about, what's the point? Money can buy quality eats almost anywhere. 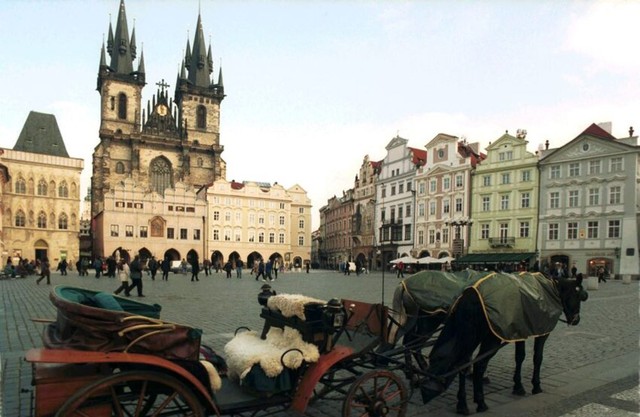 I did enjoy the tourist trap Trdlo sweeties though. Trdlos are baked cinnamon-flavored pastries made by spiraling dough around a lathe, and then toasting it above a bed of coals until baked through and chewy. Only the most pedestrian of tourists would accept a trdlo as-is. Far, far better is a trdlo with ice cream. The weird hollow cinnamon-roll tower converts into a handy ice cream cone. At 5 euros, it's about the upper limit of what I'm willing to pay for a fancy ice cream in a dough cone. But oh is it worth it. Some outlets have even figured out a way to put activated carbon in their ice cream to turn it - no joke - black. Black ice cream! Looks gothy and tastes great. Every emo kid of the early 2000s would have wished for such glorious ice cream.

When you go to Prague, I heartily recommend you take your time and wander with abandon as we did. This is cultural travel, and you'll be all the richer for it. Make sure to take in both the big weird astrological clock and the tiniest street in all Europe that is so narrow that the city installed a traffic light for pedestrians at either side. Art abounds as long as you follow your feet.