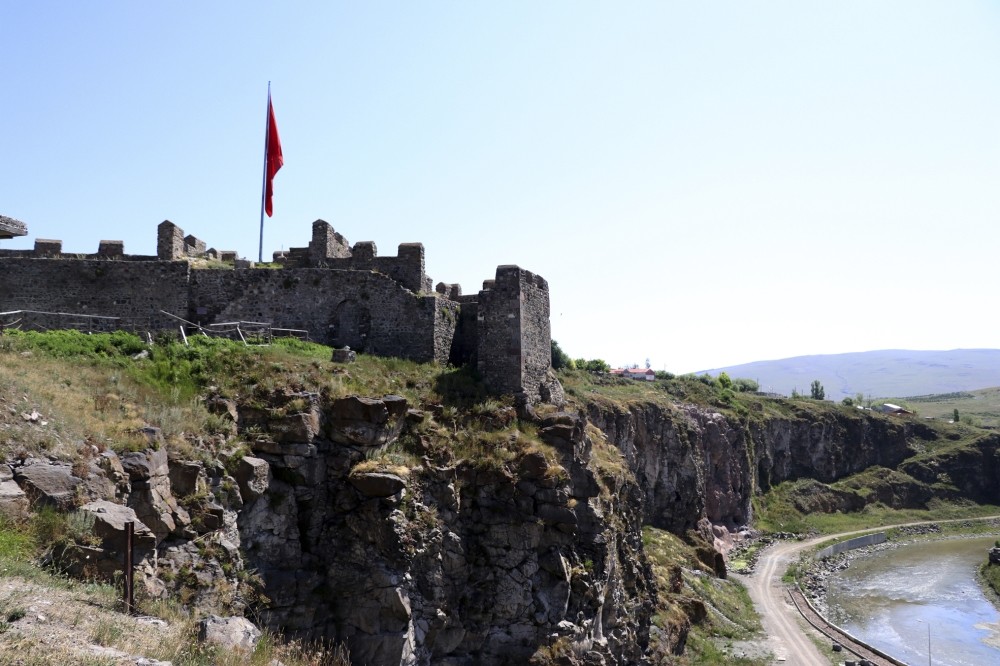 The fortress in Ardahan, the smallest city in Turkey in terms of population, and the historical structures that surround it, will serve as a hub for tourism.

On the shores of the Kura River, a flowing body of water located in a region that dates back to the Seljuk era and has been ruled by many kingdoms over the centuries, the Ardahan Fortress is undergoing restoration works for tourism, overseen by the Provincial Directorate of Culture and Tourism.

The project aims to meet the needs of tourists in the region with opportunities for memorable culinary experiences as well as unique sports facilities offering services to the area's young athletes.

The Ardahan Fortress was formerly repaired under the orders of the Ottoman Sultan Süleyman the Magnificent and the historical, military sights around it will be included in tourism.

Provincial Director of Culture and Tourism Efsal Alantar told Anadolu Agency (AA) that the project will attract many tourists to the area.

Implying the first thing that comes to mind when Ardahan is mentioned is the Ardahan Fortress, Alantar said, "Even if there have been works done to repair and restore the fortress in the past, we are about to embark on a larger project for the fortress. We are planning a versatile and authentic restaurant to be established there. This will meet the needs of visitors as well. The restorations will be done in line with the historical style of the fortress itself."

Stating that the other two buildings in the fortress will be used in a versatile way, Alantar reported that accommodations will also be available in these buildings.

Alantar said there will be a sports area at the fortress and people will be able to play volleyball, basketball and tennis there.

Saying that the fortress will be lit up for a visual feast, Alantar said, "We will introduce the Ardahan Fortress for city services. People are looking to visit natural and historical places. Our fortress is conducive with this. We can see from the experiences of our visitors that they are happy. It is a rare fortress that has managed to survive over centuries. Also, the fortress has a commanding presence. When you are here, you can see Ardahan and the Ardahan Plain. In this respect, Ardahan is worth seeing. We also want to fully restore the historical military sites near the Ardahan Fortress."

Welcoming local and foreign tourists to the fortress and providing them with information about the fortress, Alantar said Ardahan's historical and cultural investments are promising and people who visit the Ardahan Fortress always try to come again at least once a year.

Visiting the fortress, Ayfer Dündar said she came from abroad and was happy to visit.

Noting that she came to Ardahan for the first time in 20 years, Dündar said, "The area of the fortress was formerly a military area. For this reason, there was no entry to the fortress. I didn't expect it to be so beautiful. I believe it will be nicer when the restorations are complete."