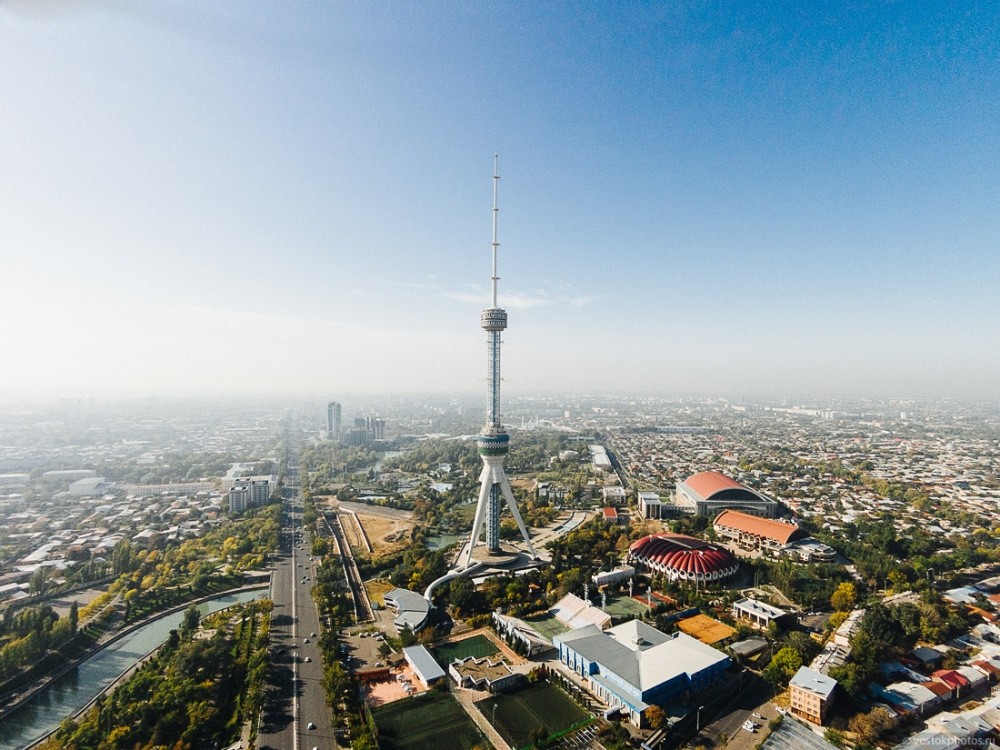 With perfumed gardens, mesmerizing art and architecture, exquisite food and a theme park, Tashkent will whisk you around its sweeping boulevards until you emerge breathless and ready for another go

My crack team of wanderers and I spent 48 hours taking in the sights. Though we only touched the surface of what's going on the largest city in Central Asia, we grasped enough to at least direct you to the most entertaining bits.

If you're flying into Tashkent International Airport you can expect a thorough bag inspection. You'll have to write down how many tissues you've got stuffed in your pockets, how many expensive American iPhones you've snuck into the country and where you plan to sell them. We came through the land border from Kazakhstan, and while the immense crowd waiting to cross made this a rather stressful experience, the Uzbek border guards realized we were tourists and let us skip the line.

Be sure to exchange your lira into American dollars before you depart. Outside of Uzbekistan, the som is worthless, and inside, it is only slightly less worthless - the official exchange rate is $4,500, and the highest bill in circulation is a $10,000 note. Off the record, most people run quasi-legal money-change businesses as a side gig and will give you a rate twice that. On the border we were approached by two women holding ridiculously large piles of cash bound with flimsy rubber bands. Two money exchanging tips are: Don't change more than you need and don't change at actual money exchanges. We went to our local butcher to get some som from his safe.

Does the phrase "hush kelibsiz O'zbekiston Respublikasiga" sound familiar? Here, they speak a version of Turkish warped by years of proximity to Persian and Russian dialects. Coming from Istanbul, you'll have to mind your Ps and Qs here, as well as your Xs, Gs and Ks, since all those letters are used in a slightly different manner.

We stayed at Topchan Hostel in the Mirabod block. Everyone recommended we stay there, and everyone stays there, not just the youth crowd. An entire Kazakh karate team had booked half the rooms when we were there. A "topchan" is a raised outdoor chill zone draped with blankets and mats. Topchan Hostel has a pleasant indoor topchan where guests drink tea and chat about their travels.

The first thing any good tourist should see is the Chorsu Bazaar, a blue dome of tile and concrete stretching across a parking lot. Be sure to find the Korean section among the glass cases full of meats and cheeses, and buy a tiny sack of kimchi to eat as you check the wares. Pop into a costume shop, which also might be a traditional dress shop, and try on all the hats. After seeing them, you'll wonder why such great fabrics and patterns never gained popularity outside of Uzbekistan. Buy a chunk of saffron rock sugar for 15 cents, or a sesame snack for 10 cents, or dried melon with soy sauce for 7. After tasting them, however, it will be very obvious why some of these sweets never quite caught on outside the country.

Just next to the Chorsu Bazaar is the old madrasah. It fell down centuries ago, and though the reconstruction may not be completely historically accurate, the interesting façade is a real eye-catcher. The Kukeldash Madrasah rises out of the tent market surrounding it, displaying a brilliantly colored mosaic on brick, dwarfing anyone who wants to enter its carved wooden doors. 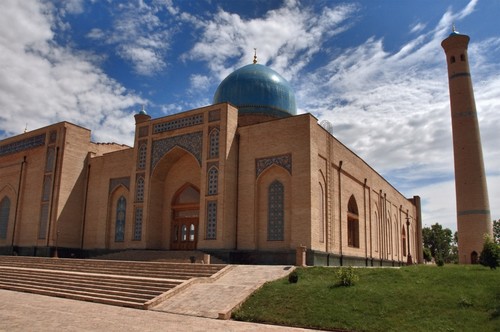 We went in and found ourselves in a quiet garden with a fountain, willow trees, and artisans puttering about with their morning chai. Madrasahs, or Islamic schools, are designed to block out the world, so that the inner chambers and garden provide a cloister from outside noise and chaos, allowing students inside to focus, or perhaps doze. We wanted to stay there all day.

The only artisan shop open inside the madrasah was a woodworker, and he offered delicately carved boxes and flutes for cheap. When else am I going to be in Uzbekistan or have the chance to support a local artisan? I shelled out 20 Som (29 cents) for a walnut box with roses carved on the lid. I love that Islam limits its artists with the "no imagery" rule because it compels them to be truly creative with their designs that often resemble intricate doodles. Islamic cultures have the best professional doodlers in the world.

To get a taste of culture, we hit the broad-roofed Amir Timur Museum, decorated with Islamic calligraphy and stained glass. 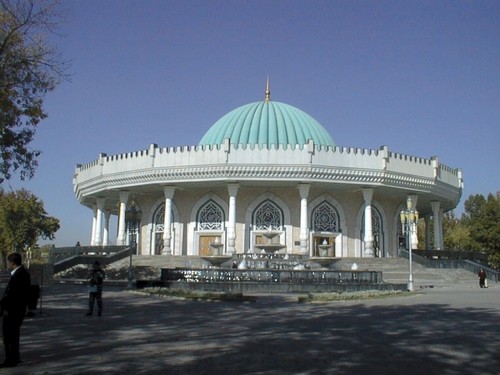 I would have taken pictures for this part of the article, but museum officials insist on accompanying anyone with a camera through the exhibits and charging them thousands and thousands of Som per photo. The place was recently built, though it features a grand spherical mural in the Ottoman miniature style of Amir Timur and his court, with gold and crystal and a no-expense-spared glitter chandelier.Amir Timur is part of the national mythology and in fact a warlord who swept through the Middle East and Asia conquering with singular implacable brutality and funneled the spoils back to his capital, Samarkand. Many of the most famous buildings of modern-day Uzbekistan were due to his lavish patronage. Schoolchildren are taught to revere his wisdom, courage and other assorted character traits. Inside the museum, you can see replicas of texts and artifacts from the Timurid dynasty. It surprised me how the originals of all of the items on display were all noted to be at museums in Denmark, Britain and France and made me a little sad that Western European countries could benefit from learning about the people who'd lived here, but the people who actually lived here had to rely on the copies.

On display in the back was a row of portraits of the Timurid sultans. Each, their captions explained how they had died in a spectacular way, murder, revenge and poison being the most popular means to an end.

Outside the museum, we wandered into a vast park and down to Tashkent's own pedestrian-only İstiklal Avenue, actually called Istiqlol, but more commonly known as Broadvay. We checked out all the local artists' offerings, propped up with pieces of wood on the sidewalk, mostly paintings of horses in mid-gallop. Sprinklers sprayed and gurgled water all over the grass. Sometimes broken underground pipes did too, creating many tiny fountains. We stopped at a pavilion with a cafe to enjoy some drinks and table tennis in the shade.

Coming to the Central Asian Plov Center made me wish more traditional foods had an institution propping up their distribution. Plov, while served all over Central Asia, found its apotheosis in Tashkent. The restaurant feeds thousands of people every day, all through the work of its smiling ustas. Outside you can see them at work around the kazans - metal woks, cemented over a brick fireplace, where the plov is cooked. The workers dump salt by the handful, rice by the bucket, liquid lamb fat and safflower oil by the liter into the kazan. Men stir the rice around with great curved spatulas, turning carrots, raisins and other spicy bits into piles of tasty gold. At station number two, dudes boil eggs, both chicken and quail, and chop up bits of lamb meat. Our waitress shooed us inside after we'd had our fill of pictures posing with the plov ustas, and took our order in a hurry. It's a simple process: How many plovs? How many salads and chai?

Inside, the hall resembles a ballroom, packed full of businesspeople, almost exclusively men, on lunchbreak. While we ate, in fact, an entire division of police in uniform marched in single file, climbed the staircases, and before I could process the thought "OMG the cops are raiding a rice joint!" they sat down for an afternoon meal. Everyone eats here.

It was just under 14,000 Som per person for the greatest rice in the world. On the way out, one of the ustas pointed to an unused kazan so vast I could stretch out inside it without covering its diameter, a Vitruvian Plov, and he said "Genis." Genius? Turkish "geniş," for wide? My brother realized he was saying "Guinness," as in the world's records. The largest plov pot in the world. The word "plov" of course comes from "pilav" or "pilaf," both of which derive their name from French singer Edith Pilaf, whose song "Non, Je Ne Regrette Rice" was featured in the hit movie "Inception."

As you might know, theme parks in the states cost a lot. Tashkent Land costs a parsimonious 35,000 Som and once you're in, all the rides are free. Of course, since there's no price gouging at individual attractions, there's no incentive to run the rides more than once an hour, nor is there any need to hire more than one operator for the entire park. This is the difference between capitalist and communist cultural inheritance. I kind of prefer customer service in the part of the world that's known collectivist economics - brusque, indifferent and leisurely. The "twenty minutes between each ride" model gave me time to regain my appetite and equilibrium.

I love Tashkent Land. From the man-cage ski lift which glacially traverses the park to its "Bumerang" roller coaster, it offers both the heights and slows a good amusement park should. Bumerang, by the way, got its name because it's the truncated half of a roller coaster. Once you go all the way through loops one and two, you go up another incline, as if to gather speed for the next go beyond, but as there's no more track, you're instead dropped backwards, terrifyingly, through the same loops two and one you just did. Why buy a whole roller coaster when you can get the full experience for half the price - and track? My face hurt from smiling, and my brain hurt from trying to walk straight afterwards. I rested by a kid's ride of kangaroos going in circles. The ride's speakers sung out Russian nursery rhymes.

After I'd recovered I went on the "Horror Castle" ride, a two-minute ticky-track through a bunch of dark rooms with animatronic horror dioramas, mostly semi-dead skeletons in various stages of murder. Then we went on an "African safari" boat ride through a park of animatronic animals and animatronic cannibals boiling animatronic white men in giant animatronic stew pots. The only thing that could have improved it would be animatronic ustas making plastic plov. I love Tashkent Land.