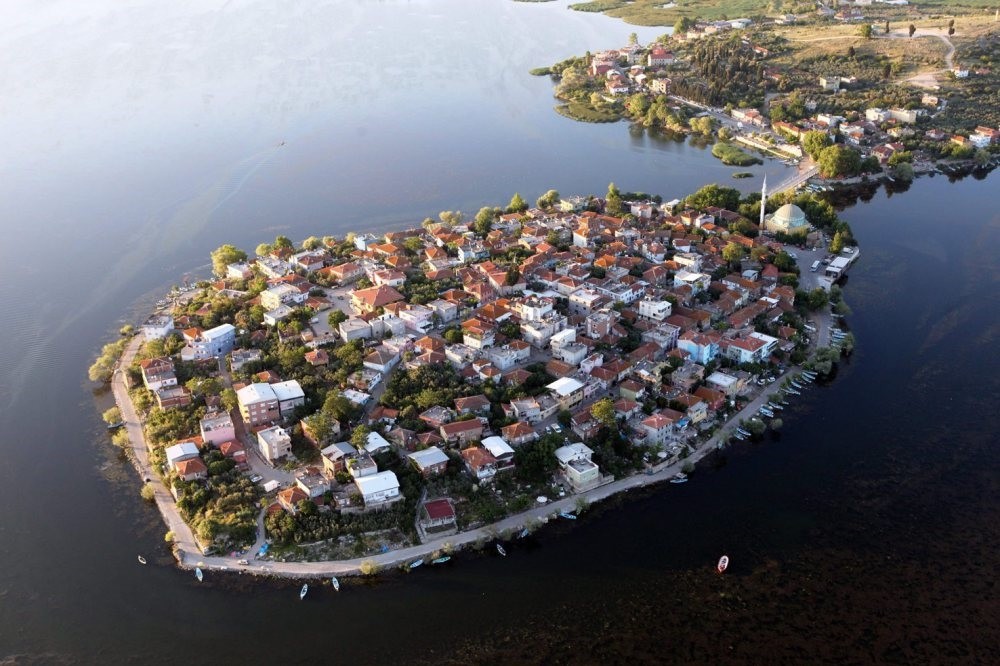 The Gölyazı neighborhood, located near Lake Ulubat in Bursa's Nilüfer district, sees around 10,000 local and international tourists over weekends.

Registered among the "30 most beautiful towns in Europe" by Japan Association of Travel Agents (JATA), Gölyazı is a popular spot every season thanks to its natural beauty.

Local authority İbrahim Şahin spoke to Anadolu Agency (AA) about the town. He said that the history of Gölyazı, known as Apollonia ad Rhyndacum in ancient times, dates back to the sixth century B.C.

Once a Greek village, Gölyazı is now home to the grandchildren of people who migrated from Thessaloniki in 1924.

They earn a living through fishing and tourism. Explaining that fishing is the main means of living on the peninsula, Şahin said that local women go out on sailboats to catch fish. They serve them to tourists who dine at restaurants in Gölyazı.

He added that Gölyazı consists of an island and a peninsula. He also said that the neighborhood attracts attention due to the bridge that connects the two-piece town.

Explaining that Gölyazı bears the traces of the times of the Byzantine Empire and ancient Greece, Şahin said: "Greeks left the region in 1922 after living together with Turks for years. The migrants coming from Salonika [Thessaloniki] settled down in their houses. We have an historic mosque and bath in Gölyazı. Here is one of the unique spots in the world with its history and natural location. Our neighborhood is under the control of the Cultural and Natural Heritage Preservation Board."

He said that in 1996, there was conducted a study by professor Aliye Emel Göksü, an academic at Dokuz Eylül University, and her students.

"Gölyazı is an archaeological site bearing traces of various cultures. It is home to approximately 80 officially registered structures, including a church, bath and windmill. They are being restored faithfully to their original form. The Nilüfer municipality is conducting the projects on written contracts made with residents and with the support of the governorate of Bursa," he said.

"The restoration of some of the houses located in the square have been completed. Those that are not suitable for restoration are reconstructed faithfully to their original forms. When restoration and reconstruction are completed, the neighborhood will regain its historic and unique identity," he added.

"Gölyazı is the greatly enjoyed of foreign and local tourists. We especially see tourists from Istanbul and İzmir and the number goes up to 8,000-10,000 on the weekends. We also have tourists from Japan, China, the U.K. and European and Arab countries," he said.

"We have been hosting mostly tourists from Arab countries in recent years," he added.

"Thanks to the entrepreneurship of the Gölyazı Tourism Development and Improvement Cooperative, the lake was provided with sultanate boats for tourists. For now, we have three boats serving tourists on the lake. It is popular, especially among Arab tourists," he said.