Ohrid: A medieval town in search of its roots in the 21st century 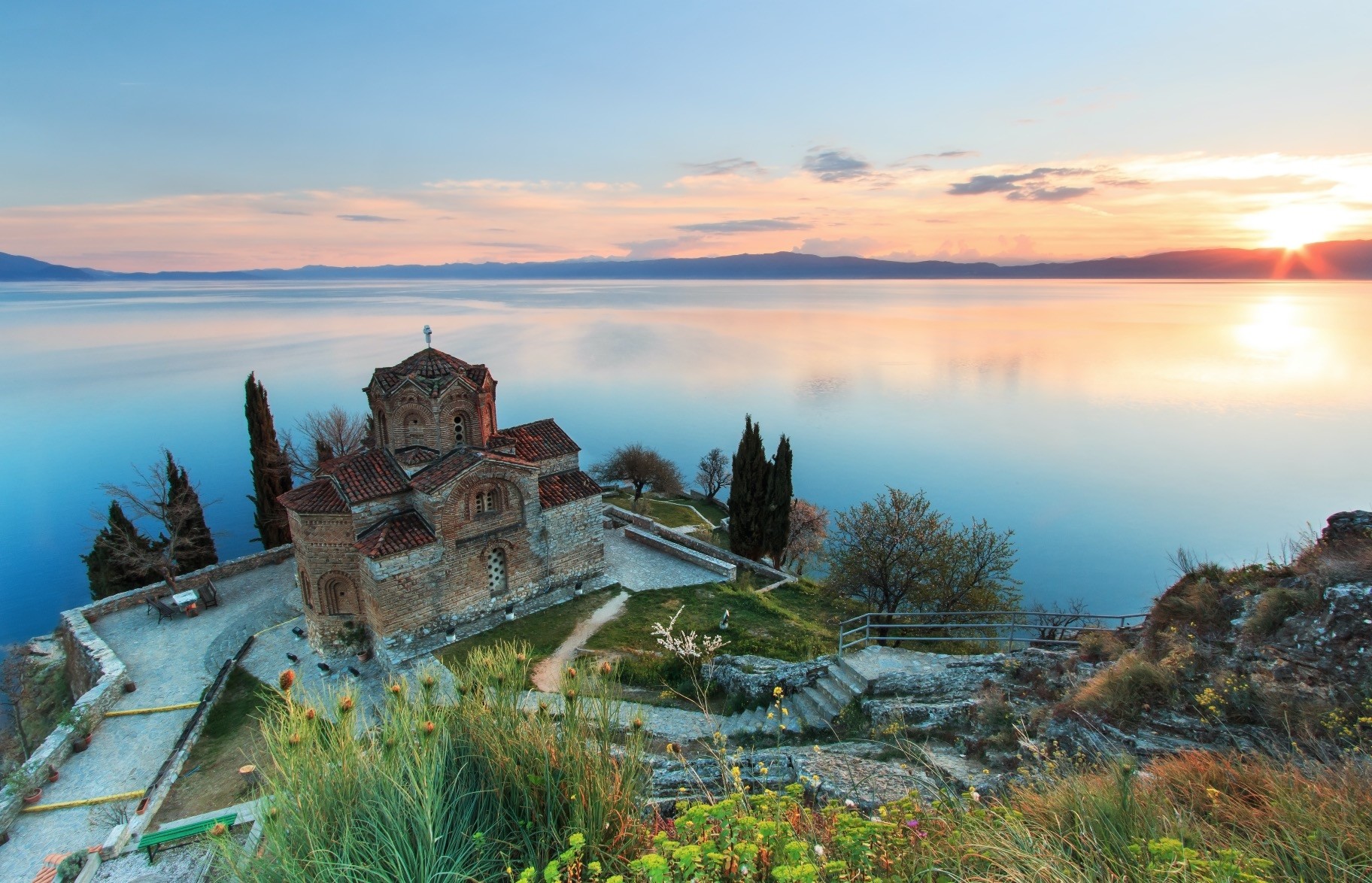 Taking a step into Macedonia, one quickly realizes that the country is in the middle of a little identity crisis, but when it comes to its natural beauty, make no mistake, it is a gift from Mother Nature

Ohrid is a stunning medieval Ottoman town on the shores of a mountain lake. The old town drags and clambers all over the hills behind the lake. Terraced cobblestone avenues run between tall, narrow houses, and age has tinted the facades of the buildings so the whole city looks tea-stained. We got lost in the flower-strewn corridors of the old city. We saw a church of dusty brown stone which looked like a dribble castle. We swam in the cold blue of the lake and walked along the beaches.

We went to cafes in the public square in the morning, and we went dancing at a club on the docks at night. We stopped at a café in a stone house which had been a private mansion until it was sold in the 80s. And, while searching for the bus station in the new part of town, we walked through a rustic village and saw a fat brown bulldog lounging on a porch behind a custom-made BEWARE OF DOG, which portrayed the same fat brown bulldog sitting on that same porch in the same pose. Ohrid is a beautiful old Ottoman town in a crater lake in a geographic nowhere and I love it.

Most of what I learned about Macedonia, and the town of Ohrid, happened over a plate of kebab, and came from a Slavic-origin dog enthusiast from New York.

We were walking down the square in Ohrid away from our hostel when a man in a dirty gray t-shirt saw our dog and came over to pet it. His wife, smoking spindly cigarettes, descended on the dog in a frenzy of sweet words, cuddles, and cooing. The guy, Kosta, was from Brooklyn, but his parents were Macedonian and he had partially grown up in Skopje. He recommended a kebab place called "Delicious" (Fkuzna), the thought of which apparently made him so hungry that he and his Slovenian wife came with us and ordered for us. We got Macedonian kebab, called "cevap," tiny logs of meat served with amazing grilled bottle-green peppers. Kosta said that he and his wife visited last summer for about two months and kept meaning to try other restaurants, but they just kept coming back here, every day. This was their favorite restaurant in Europe, maybe the whole world which meant that they ate ten tiny meat logs every day for like two months. Fkuzna.

Macedonia, or the Former Yugoslav Republic of Macedonia (FYROM), was the last state to break away from the former Yugoslavia. The name itself comes from the region of Europe they're in, Makedonia (with that hard k sound), but even that's controversial as it is also the name of a region in northern Greece. This is why when they entered the United Nations, they had to pick a name that wouldn't make Greece upset, hence the somewhat off-center acronym of FYROM. 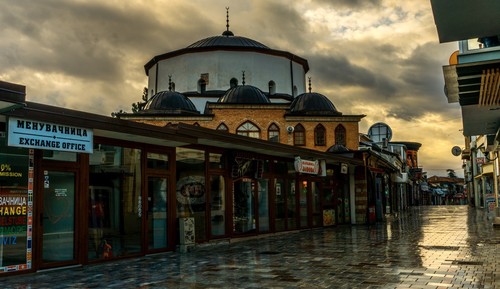 Secondly, they have a bit of an identity crisis, since their language and the Bulgarian language are mutually intelligible, for the most part. Bulgaria used to have this big ol' kingdom in the middle ages which included modern-day Macedonia. The city of Ohrid was an ancient capital of the kingdom, and Bulgarians still feel like it was stolen from them by the Macedonians, who are certain that it was the Bulgarians who'd usurped the just Macedonian king from his throne. You see how complicated this stuff is.

Macedonia as a nation has this need to distinguish themselves. Though most Balkan countries feel a deep need to assert their nationalism, organized around a heroic figure, Macedonia most recently started playing this game, as they only became a republic in the nineties. Out of this great need for a national pride, in Republic Square in Skopje, a colossal gold Alexander the Great rises out of the earth on a pillar, surrounded by phalanxes embossed into the pillar's base, obscured by a spray of mist from the fountain. When people ask, hey, what's Macedonia? Anyone in the country can say, "Take a look at that enormous pillar."

When we first arrived in Ohrid we noticed none of this nationalism – just a lot of history concentrated in one beautiful spot. It was a bit too late to start sightseeing, so we dropped our things at Sunny Lake Hostel and headed to Çınar restaurant in the Turkish quarter for some kebab. Cinar, for our non-Turkish-speaking readers, means "Sycamore," and an enormous Sycamore tree was rooted in the cobblestone roads, sheltering the outdoor tables at this restaurant.Before being a suburb for rich Turks, Kosta informed us while as were sitting down for meat logs at Fkuzna the next day, Ohrid was a Slavic university town from the middle ages which has 365 churches, actually literally truly one church for every day of the year. Good Christians would actually visit a different church for every day of the year in a peculiar keeping-up-with-the-Joneskis medieval contest. The Cyrillic alphabet was invented here, at the University of Ohrid, by a couple of monks who felt the Greek alphabet was inadequate to describe the liturgy in the Slavonic dialect of the time. 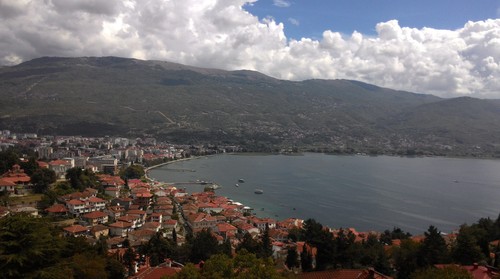 Lake Ohrid is nestled in a hollow between the mountains. If you walk around the lake, you can see the ridges extending far into meadows where you will never walk. From the old town, a boardwalk runs along the side of the lake bolted to a sheer rock wall, and then the trail goes up past a ruined church – the Church of Sveti Jovan (St. John). This is probably the most photogenic building in the whole town. It's easy to see why: against the backdrop of the plaintive blue lake and low sloping mountains, a series of bricked octagons topped by a zigzag tile roof cuts into the horizon. Inside, if you want to pay the 100 Macedonian Dinars as admission ($2) you can peep at all the icons.

Past the church, then into the woods, a trail runs down onto a secluded beach. This was a premium spot, as nobody was there, though we did find a nearby hobo shack and broken refrigerator which had last been used to store hundreds of thousands of spiders. The scenery was ethereal.

Felix, a Swiss guy from our hostel, and I got into the water. I dived in, but jumped out soon afterward because it was too cold. Felix said "You have to meditate into it," and waded in, centimeter by logical centimeter. Cassidy, a Canadian EMT with a probably-not-coincidental zest for life, arrived late and leaped into the lake, and said Woo! Let's swim to that cave over there. His vitality was inspiring and we followed. It is an attitude I wish to emulate: take enormous leaps and then follow them through. But the water was icy: we swam and it was like swimming through crude oil. I had to keep moving to stay warm. Every time my head dipped beneath the fresh clean water, the mountains would disappear, and then reappear back into view.

Then, it was time to towel off and head to Samuil's Fortress, towering above the town. You haven't looked behind you yet? Oh, be careful, because you might get crushed by the shadow of Tsar Samuel's walls. The 11th century was a good time for the Macedonian kings. They had enough money and territory and rocks to build an impressive skyline, most of which still lines the background of any photos you might want to take.

Just below the fortress by the shores of the lake is the Plaosnik church and archeological complex. The church dates from the 4th century, and it's surrounded by the stubby walls common to enormous monastic compounds of the past. This one used to host 3,500 scholarly monks. Most weirdly, one of the mosaics on the floors of the compound features a swastika. It didn't mean anything bad back then! It was a good luck symbol! (Though, I was a bit perturbed by the graffiti swastikas on streetlights outside of town.)

After you've hit up the big names in Slavonic churches, I strongly recommend you spend the rest of the afternoon just strolling past the chunky wooden houses and along the cobblestone roads of the old Ottoman town. There aren't nearly enough gorgeously-preserved Ottoman cities in Europe, with the clean white walls and brown wooden trim of their domiciles, and every time I find myself inside them I feel a great warmth towards the many craftsman who built these houses for the Balkan middle class several centuries ago. Today, you can either rent apartments from the locals or eat in their restaurants – as in most Balkan countries, the residents of antique houses have figured out that they can rent their restored flats out to tourists for as low as 25 Euros a night. Monks in the 11th century probably paid a bit less, but you at least get to order as many meat logs as you can eat. Fkuzna.