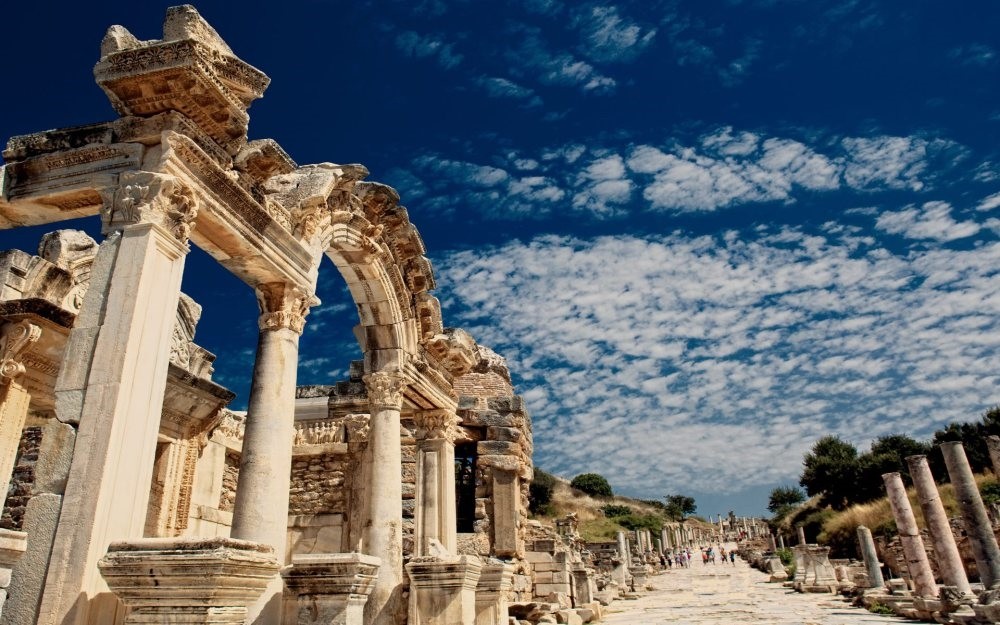 It is not surprising to find ancient ruins while wondering around Turkey, and whether an ancient column or a theater stage, these ruins tell a lot about the place where you are

Often in our wanderings through Turkey, haphazard and fated as they are, we come across some broken-down old columns moldering in the forest. Hello, we say, with a sort of dim propriety, what have we here? From where came these piles of rocks? They look old. Indeed, they are old. I know precious few people who would spend time hammering out columns from chunks of marble when things like rebar and concrete are so readily available. It must have been one of those history things.

So, we felt it would be appropriate to do some reading about who these history people were. All up and down the coastline of what was then known as Asia Minor, the ancient Greeks paddled up to the shore and built Mediterranean villas for their retirement. They imported olives, goats, grapes, and about 10 trillion shards of pottery. Although Greek kings and city-states tussled with Persians, Romans and other Greeks for 1,000 years, eventually the whole area fell under the sway of the ever-expanding Roman Empire. The Romans were savvy enough to adopt the Greek way of life, though, and modeled their cities on the Hellenized metropolises of the Greek world.

This brief guide will imagine you as a sailor or southward wanderer, visiting the three top stops on the Greek nautical superhighway. And in time, we'll help you uncover the meanings of the aforementioned big piles of mysterious rocks.

Homer describes Troy as "high-walled, strong-built, and well-founded," and while there definitely are walls, the rest of it looks like a pile of rubble. As you probably know, Homer wrote, or more probably recited, if he existed at all, a long poem about the siege of the city of Troy.

As the story goes that Paris of Troy was recruited to judge a beauty contest between Athena - the goddess of wisdom and patron saint of Athens - Aphrodite, the goddess of love, and Hera the big bad queen goddess. Aphrodite bribed him, saying she would give him the love of the most beautiful woman in the world, Helen of Sparta. Paris gave the golden apple to her and Aphrodite enchanted Helen to Troy. Trouble was that Helen was already married to a Spartan named Menelaus, whose brother was the king. So, they raised a wicked army and invaded Troy without much success for the next 10 years. Then Team Sparta built a big wooden horse as a we're-done-with-this-war present, which the Trojans took inside the city, but actually there were a bunch of soldiers inside the horse who jumped out in the middle of the night and killed everyone. 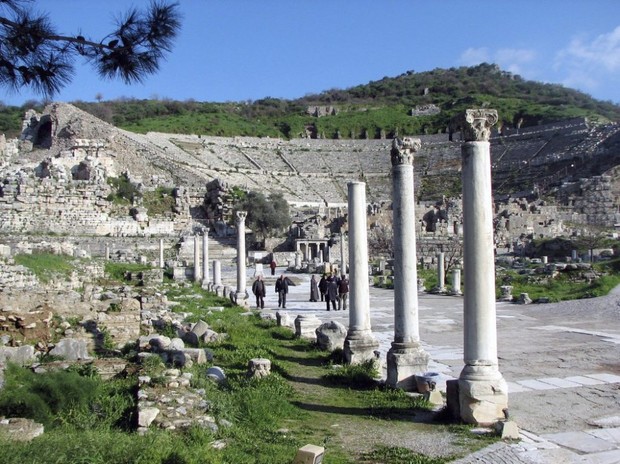 In reality, archaeologists aren't sure if the Troy in Troy was the Troy of the Iliad, nor was the war about a beautiful woman, nor did it go on for 10 years, nor were most of the people involved professional soldiers. There was probably a real war in the 13th century B.C. The war was most likely between Achaean Greeks and Asian Greeks for control of the Dardanelles. Most of the soldiers were farmers, and would have had to go back and harvest their grapes, grain and olives in the fall. War would have been summer vacation.

Most of the historical town of Troy is in Hisarlık near Çanakkale. Troy got burned down, struck by earthquakes and destroyed 10 times over, and the newer walls are built on top of layers and layers of excavations. Each of the walls is labeled so you know which version of Troy it came from - Troy XI, or Troy 2.0, or Troy Snow Leopard. As there's not much in terms of temples or columns or anything, the stories in the Iliad improve the site immensely - you can imagine Achilles and Hector duking it out in the burning streets. You can go view the 12-ton fiberglass horse from the movie version of the Trojan War, "Troy" in Çanakkale.

This city was a cultural capital, both of the Hellenic world and the later Roman civilization. Here is a fun anecdote: Ptolomy, the Greek king of Egypt, had a monopoly on papyrus production. His library at Alexandria was the grandest in the Mediterranean, and papyrus was the most commonly used writing material around. He got worried that other city-states would get their own prestigious libraries, and so banned the export of papyrus. The merchants of Pergamon, not to be outdone, started developing vellum parchment production in response - a kind of paper made from the skin of sheep. It became such a huge industry, well known throughout the ancient world that the word for parchment in Italian is still "pergamena." Take that, Ptolemy.

During the Hellenistic period, Pergamon became a really big deal among the Greek city-states, and we know this because they built a terrifying theater. The hills which Pergamon is built into were way, way too steep for the traditional model of Greek theater, but the resident Greeks needed their drama. So, into the steep slopes they dug an amphitheater for 10,000 people, who could teeter on the edge of their benches watching the actors in masks below, and also the entire floodplains beneath that. To stand in the amphitheater has been described as "vertigo-inducing" by the Lonely Planet guidebook, and I for one can see their point of view. 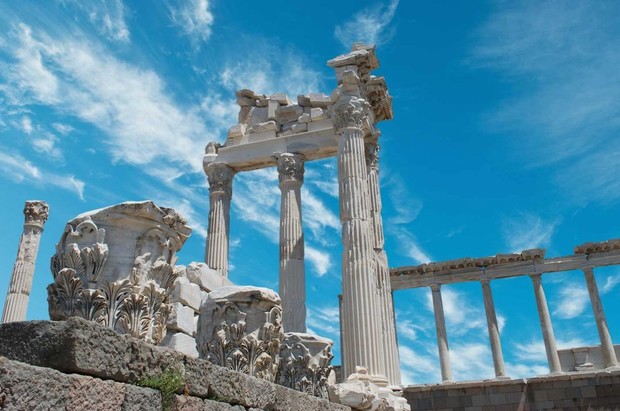 Beyond the theater, up the hill, you can find the Temple of Trajan. Trajan was the Emperor of Rome, and while he didn't live to see his temple finished in Pergamon, his successor Hadrian made sure it was finished nicely. The floor plan was a rectangular temple in the center of an open agora, all overlooking the ocean many miles below. Though it all fell down ages ago, modern archaeologists have spent a good deal of effort putting friezes together and stacking columns back up for your benefit. You can see long rows of Corinthian columns stacked on huge stone blocks and get a scale of the thing. Trajan's marble Roman torso is on display. And rather than spend hours taking the bus up, there's a telfer! Too bad the Greeks and the Romans had to hike - though I imagine it would have made a pilgrimage to the big torso a lot more meaningful.

In the ancient world, travelers from all over noted the awesome beauty of the Temple of Artemis. It was perfect. It was stunning. It was so beautiful that a guy named Herostratus wanted to achieve immortality by burning it to the ground, so I guess since I'm mentioning him in a weekly travel article 2,373 years later, mission accomplished. It was rebuilt several times, but the successive versions were nowhere near as good. Now all that's left is a single standing reconstructed column in a field of golden grass with boggy patches.

But don't worry about that. Ephesus, just down the highway, never fails to impress. If you're looking for somewhere to take your parents when they come visit, it'd have to be Ephesus. They have real colonnaded streets, a theater, and of course, the impressive façade of the Library of Celsus.

But let's back up. Ephesus has been continuously inhabited for something like 5,000 years, by Hittites, Mira, and Luwians, the latter two of which I had no idea existed until I started writing this article. Ionian Greeks colonized the place and joined 11 other city-states to form the Ionian league, a potent naval and mercantile force in the eastern Aegean. During Roman times, the city's population swelled to more than 250,000. Next to modern Istanbul's nearly 16 million, it doesn't sound like so much, but Ephesus was a swarming metropolis in the ancient world. It used to be a coastal city - but inhabitants dredged the natural harbor there so many times in the several-thousand-year history of the city that the coast eventually retreated and its population gradually moved on. Settlers used the once-proud marble city blocks as cornerstones for their new houses.

We can get a good idea of Hellenistic and Roman life from the layout of their cities. Public activity was centered on the agora (the market), the baths, and the theater. In Ephesus, you can still see all three well preserved. Residents could participate in commerce in politics in the marketplace, they all enjoyed good public health due to the baths' public cleanliness, and they enjoyed shows at the 25,000-seat theater, the largest in the ancient world. The Greeks watched their dramas, but the Romans preferred gladiatorial combat instead. Take a moment to really imagine that. There was a whole empire of millions of people that relied on guys fighting each other (and bears and lions, I suppose) to the death as public spectacle. Today, we have kind of a hybrid Hellenic and Roman sense of theater - we perpetually simulate dangerous experiences with action movies, but also we love a good soap opera.

Ephesus has its main attraction, though, beyond the regular trappings of social life found in all the cities I've listed here - they had one of the most impressive libraries in the ancient world. Well, after Alexandria and Pergamon. Named after a Roman senator, it housed more than 12,000 scrolls. All of these scrolls had to be written by hand, and all of them had to be stored in some logical accessible fashion, organized only by tricky mental systems. Austrian archaeologists have spent the last hundred years (though they lost their permission to continue the dig in August of last year) remaking Ephesus, and their reconstructed façade for the Celsus library stands as their most stunning achievement. It's a marble house of cards, columns and lintel stones and four statues stacked on top of each other, safeguarding the knowledge within.

The Greeks and Romans managed to figure out most of what we consider modern civilized life about 2,000 years ago. For your next vacation, lose some of that contemporary hubris by staring at a pile of debris.