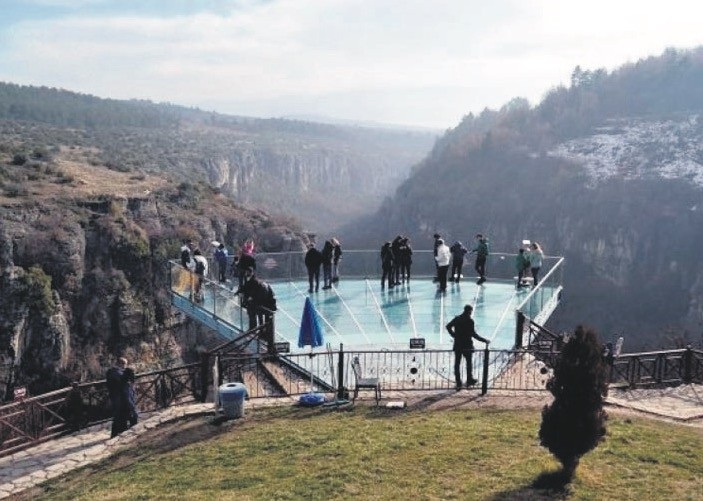 Home to a UNESCO world heritage site, northern Anatolia's Karabük is famous for its well-preserved Ottoman towns and houses.

The province now has one more center of attraction, a glass terrace looking over the İncekaya Canyon in Safranbolu district which hosted more than 450,000 visitors this year.

The glass terrace, the first of its kind in Turkey, was constructed in 2012. It is 11 meters long and can support up to 75 tons of weight. It was inspired by a similar structure in Arizona, U.S.

The terrace hosted around 100,000 visitors in the first two years but that number has skyrocketed recently.

Speaking to Anadolu Agency (AA), Ömer Gülçimen, the general director of the company that operates the terrace, said the number of visitors was increasing every year.

"We are the second company to operate the terrace. When we took over, the number of the visitors was around 100,000. That number has since tripled and hit 450,000 in our second year here," he said.

We want the number of visitors to climb in a stable pattern, the director added.

"After Safranbolu was declared a protected site in 1994, more people have been coming to visit the city."

"Though the terrace can carry up to 75 tons we are limiting the number of visitors on it at one time to allow them to move freely," Gülçimen said.