Ancient waters: Pamukkale with a touch of history 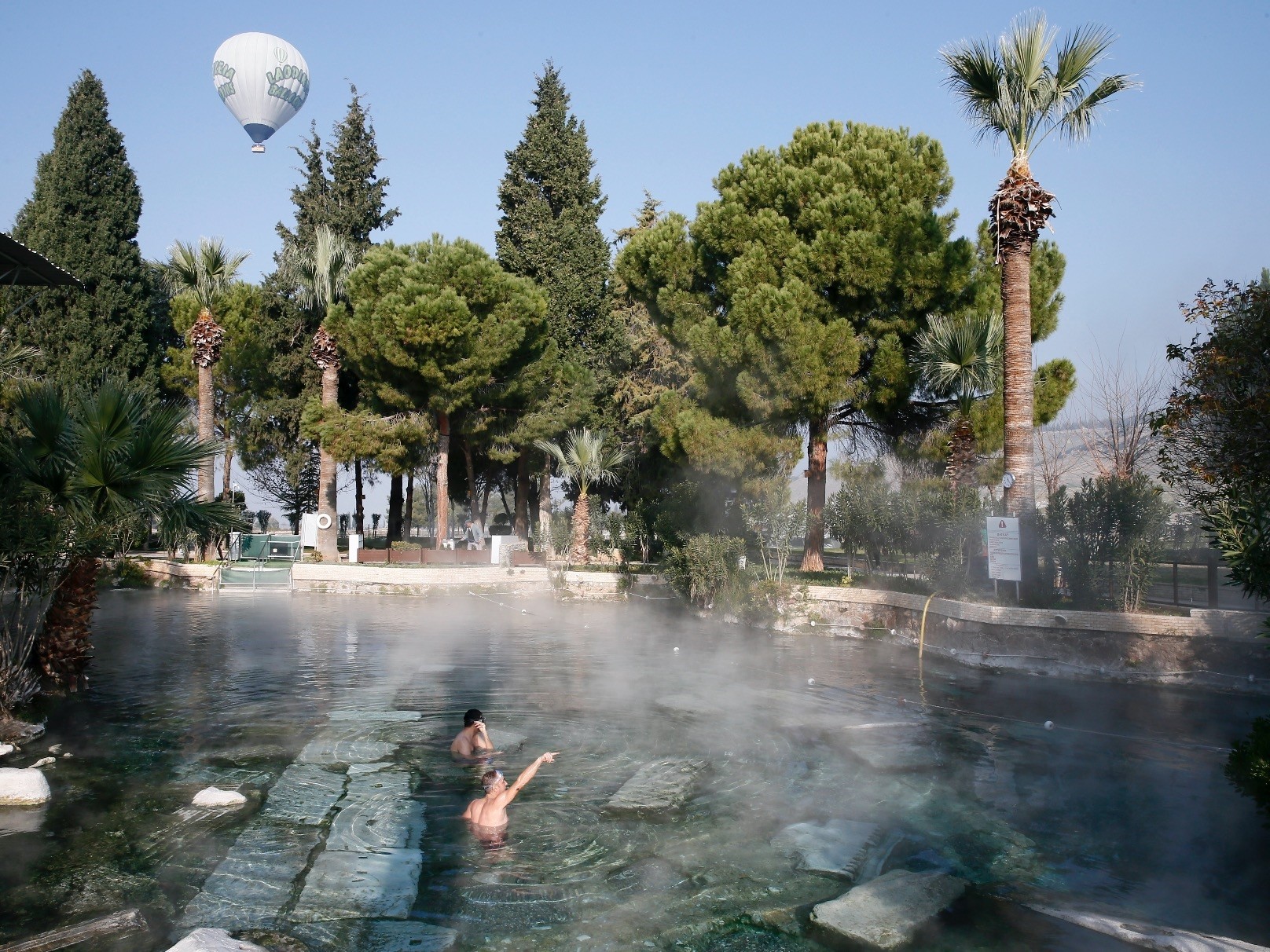 The healing waters of Pamukkale were discovered by the Phrygians who named it after their god of the underworld but now, the wrath of this ancient Greek god manifests itself in modern spa treatments

In the sixth century B.C., a bunch of Phrygians in southern Anatolia found a big hole in the earth which shot out kill gas. Lethal fumes! It was warm, so birds would cozy up close to the cave, only to spiral out and die once they had breathed in enough of the fumes. At the time, some of the Phrygians worshipped a goddess named Cybele who went from place to place in a chariot pulled by big exotic cats, and basically whipped people into a frenzy of music, circle-dancing (possibly the ancestor to the Black Sea region folk dance "horon?") and libation-consumption. Their eunuch priests, when they found the death cave, realized it had to be a portal to the underworld. "This is it!" they probably said, in Phrygian, "now we know where you go when you die! In there!"

Just across the Aegean Sea, the Greeks were always one to realize a good opportunity when they saw one. Geological emissions featured heavily into pre-Abrahamic religions in the ancient world. The Greeks already exploited the petrochemical vapors wafting out of Mount Parnassus at Delphi - their priestesses would spend years doing psychological preparation and fasting, and then get to breathe those wacky fumes deep. They would go into a trance and, after someone did a quick goat sacrifice, spend the rest of the day answering questions in spaced-out verse, usually "interpreted" by a bunch of priestly shills for a fee. Or, a bit closer to Death Cave, the geothermal fires at Chimera near Mount Olympus were so huge they could be spotted by sailors at night. Clearly, that was the work of some divine presence. 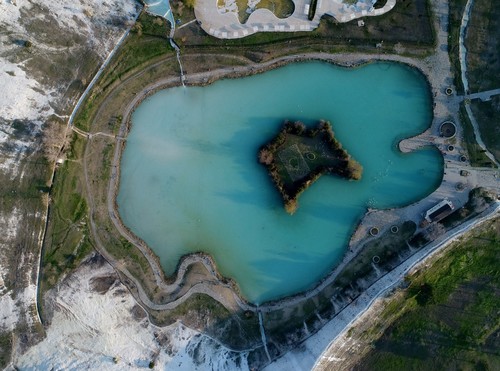 So as the Ancient Greeks were one to do, they colonized the Death Hole, and named it after their god of the underworld - Pluto. They also built a theater around it, so travelers could watch bizarre culty shows. It must have been eerie. I'll let the first century B.C. geographer Strabo describe it:

"The Plutonium, below a small brow of the mountainous country that lies above it, is an opening of only moderate size, large enough to admit a man, but it reaches a considerable depth, and it is enclosed by a quadrilateral handrail [...] and this space is full of a vapor so misty and dense that one can scarcely see the ground. Now to those who approach the handrail anywhere round the enclosure the air is harmless, since the outside is free from that vapor in calm weather, for the vapor then stays inside the enclosure, but any animal that passes inside meets instant death. At any rate, bulls that are led into it fall and are dragged out dead; and I threw in sparrows and they immediately breathed their last and fell."

And Strabo wasn't just an honored guest, to be able to throw sparrows in - anyone could buy a bird for a drachma or two and throw it in, just to see what happened. To top off the show, the Galli (the eunuch priests) would take really deep breaths and go down into the cave, finding hidden pockets of oxygen to stay down longer. It was a religious-daredevil-showmanship combination which so rarely exists in the modern world. Was it divine protection? Was it just big lungs? Either way, it was a good show; morbid, but entertaining. Naturally, they also set up an Oracle of Pluto here, and charged a hefty fee to the public so they could ask him spooky questions, too.

I'd like to pause here in our story for a brief reflection on spirituality. When you think about it, religion was quite a bit simpler in the ancient era. The earth contains lots of frightening, powerful phenomena. Nobody really knew how anything worked - the wind blew, storms came and went, the sun made edible plants come up out from the inedible ground. Myths, though they provide texture and explanation for thunder, or geothermal fire, or caves that kill, aren't really necessary for a religion - the world is full of unbelievable miraculous things. So you find a weird cave in the earth which kills anything that goes inside it - why not found a religion? Let's have a little party, too, do some circle dancing and bang on a drum. Moving on.

The Romans, once they began expanding their empire that far, recognized that the colony would be a great spa. The natural hot springs near the Plutonium made it ideal for the ill. And, of course, for the very wealthy. Hierapolis, it was called, and it was the Florida of its day - the retirement paradise of the Roman Empire, a place where you could wait to die in relative warmth and comfort. That is probably why the necropolis at the ruins of Hierapolis is so extensive - a great number of rich dying people means a great number of elaborate tombs. The glimmering white-blue pools nearby, and beautiful frozen waterfalls strangely warm to the touch, made for good scenery. 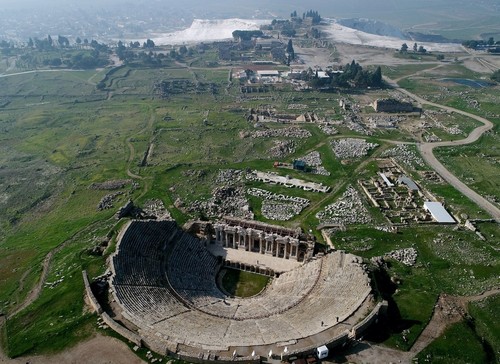 The Romans, unlike the Greeks, tried to keep their religion and entertainment separate, though of course they stole both theater and religion from the Greeks. The administrators at Hierapolis built a fabulous theater into the hillside at Hierapolis, so their spa guests could enjoy a good gladiator show while they drip-dried. Hierapolis had a golden age in the first and second centuries - it had a population of 100,000, a gymnasium, baths, a colonnade.

The Galli were still around, and by the Christian era, most Romans found them a bit creepy. St. Augustine reported that the Galli eunuch priests, on their holy days, were "parading though the squares and streets of Carthage, with oiled hair and powdered faces, languid limbs and feminine gait." Christians filled in the Plutonium some time in the fourth century. After a series of earthquakes, and, I suppose, the decline and fall of the Roman Empire, the site became abandoned. Persians and Crusaders and Seljuk Turks squabbled over the territory for a good long while, until it was simply a sleepy hamlet in the Ottoman Empire.As modern Turkey opened up to the world, and modern excavations began at the site, the small village at the feet of the travertine pools got a lot more traffic - the locals realized they could open pensions and restaurants and all manner of things to keep their guests amused. I'm told that back in the 70s, proprietors would put a bottle of something out in the pools to cool, and in a few days, the bottles would have acquired a white crystal sheen, just like the pools. They called their pools their "cotton castle" - Pamukkale.

In the 80s and 90s, much like the ancient Greek entrepreneurs and Roman administrators, local hoteliers sought to attract the wealthy with spa treatments. They started diverting water from the hot springs for use in their own pools. The springs quickly became overtaxed, and the water stopped flowing in a lot of places. The government slapped on a number of regulations, and while some of the hot springs still don't flow anymore, the area is much better protected.

Little did anyone in the ancient world suspect that all of these phenomena - the earthquakes, the hot springs, the gases in the Plutonium - were all caused by the same geological phenomena. Tectonic activity causes all the groundwater to heat up, dissolve a bunch of limestone, and then contact with the air turns the hot water into carbon dioxide and a calcium carbonate, i.e. the chalky white stuff which makes up the travertine pools.

Pamukkale is by no means the only set of travertine pools in the world - Hierve el Agua in Mexico's Oaxaca state boasts a giant calcified waterfall, the Badab-e Surt pools in Iran have a gorgeous rusty red color, China's got at least two terraced springs, and in the U.S. at Yellowstone National Park can you find them. Even New Zealand used to have their own Pink and White Travertines, until a volcanic explosion in 1886 destroyed them. But Turkey probably has the most spectacular set, both in their dazzling white-blue color, their expanse, and of course, because there is a huge ruined Roman city just on top of it. You can even swim with the ruins. The Antique Pool, though it is likely a bit crowded and a bit expensive, still offers a unique experience for visitors who want to dip their toes in next to a fallen marble column. It used to be the Temple of Apollo.

See what is interesting, for me, about this unusual and beautiful site, is that ancient and modern people all recognized its worth. Different peoples found different reasons to set up some human infrastructure here to enjoy the stunning natural phenomena.

Though you can go up in a balloon, or shop for shoddy Turkish delight in the market around the parking lots, perhaps when you visit Pamukkale you should try to find the Plutonium. It is a small opening which has PLUTO written in Greek above it, so it shouldn't be too hard. I urge you not to start your own religion. Circle-dancing and banging on drums, however, are always encouraged.