Get out of town: Day trips from Istanbul 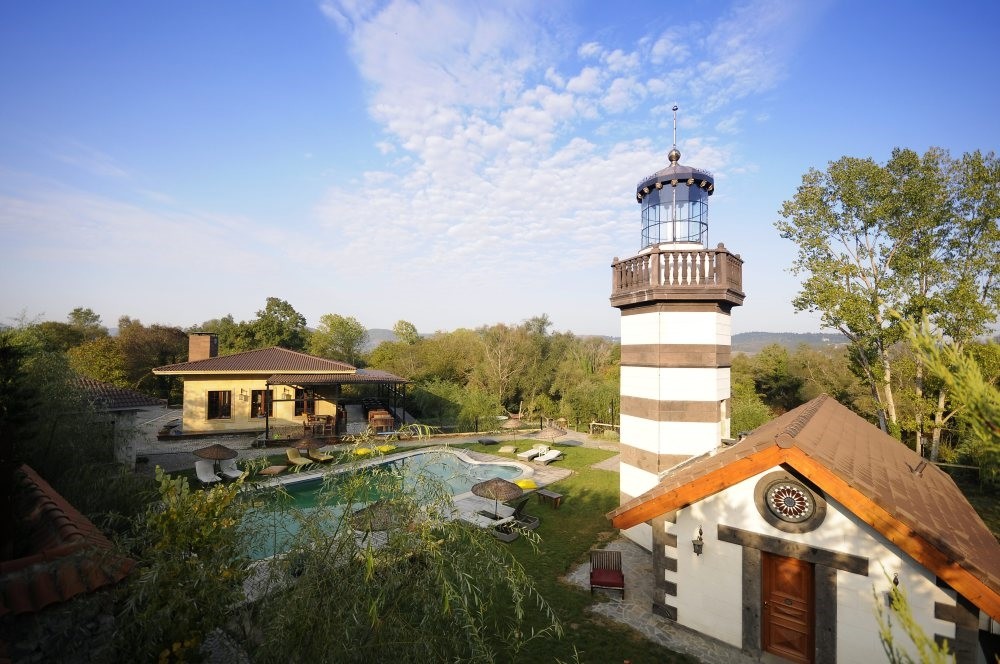 The problems with megacities is that they sometimes feel like they trap you, surrounding your soul with their tall, gray buildings, and when this happens, the best thing to do is pack a small bag and get out of town

Every year around this time in Istanbul, I experience a great jittery cabin fever. The city's concrete apartments close in around me, and I panic. The street cats, rather than pleasant or kind, appear to me as soggy bedraggled fiends more likely to scratch and hiss than accept a head pat. Everyone frowns. The drizzle and fog follows me around in a personally directed cloud. A mania seizes me. I have to get out.

The best antidote I can provide is to suggest you rent a car and get out of town. If you're new here and the prospect of driving on an Istanbul road seems daunting, I completely understand why. Don't worry, there's public transit to most of these places. This weekend, you're going to get out of the city and go to the Black Sea.

My first winter in the city, I had no idea where to rent a car. I wandered up and down Cumhuriyet Caddesi, the drag in Üsküdar where I lived, where a lot of car lots either rented or sold. I went into every shop from the bottom of the hill near the ferry stations to the top closer to my house. It was a Saturday afternoon. Each place I asked the same question: Any cars for rent? As this wasn't exactly a district where foreigners tended to live or where tourists tended to visit, nobody had either the legal authority or language skills to negotiate a transaction. Neither did I. The first place I went to I accidentally asked if they had any cars for sale, and despite it being a car lot, the proprietors blanched and told me no.

"Neden yok," they said. There is no why. I'd wandered almost to the top of the hill, to discover that most places were either closed or had no automobiles on a Saturday afternoon, when I tried a dingy repair shop across from my alleyway. I opened the top half of the door and spoke into the dark office.

"Do you guys know where I could rent a car?"

He drew the shades closed. He drew up the papers, and told one of his sons to disappear further into the alleyway to retrieve a beat-up Symbol, which is not a brand of car I was aware of, and we signed some papers. The car came around and we were invited to inspect it. It had a rich dent in the front bumper, 154,666 kilometers on the odometer, and a peculiar odor of bananas. "Tamam mı?" the bald guy said. Is it alright? It was perfect.

For any visitors reading this, a good price for a rental car is about 100 liras a day, and an okay price is about 130 - get a fuel-economy model since gas is expensive. There are plenty of international rental companies like Hertz and Enterprise with offices both in Taksim and at both airports. Having a car gets you access to a whole range of things outside Istanbul that most visitors never see.

Istanbul's "little Poland" is the only place in today's article you really will need a car to get to. The traffic drags by in fits and starts, but soon, you'll be emptied into an enormous wilderness. When the city breaks, finally, you will see trees and forests and space and sunsets over the undulating world. And then a turnoff towards the tiny strange village.

Polonezköy was founded in 1842 by a group of Polish emigres and political exiles, led by Prince Adam Jerzy Czartoryski, who fled their own country after the 1830 uprising against the Russians. Its population grew after 1848 uprisings, which also affected Poland. Turkey donated some space in the woods to the Poles. Over the years, more and more Polish people trickled into this little community, escaping the Crimean War and other uprisings back in Poland. Locally it's called Adampol (named after the Prince who founded it), but officially it's Polonezköy – from the French Polonaise, for Polish, and Turkish koy, or village. They've managed to retain the language, the culture, the food, and even some of the architecture. 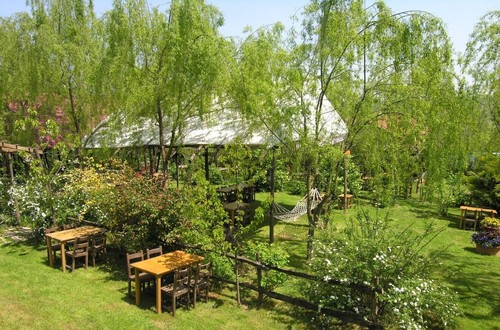 It is hugely, hugely weird to leave the largest city in Turkey, enter a forest, and then find yourself in the middle of a Central European village. Though there's only about 40 people left who still speak fluent Polish, it's obvious the locals have kept their heritage alive. In the summer, they bring over polka bands all the way from real Poland for folk festivities - in the winter, you should call ahead to find out whether the motels and restaurants would kindly open for your party for just a night. Leonardo's is particularly good.

Make sure to visit the House of Memory, where Zofia Rizi's personal effects have been kept for years. At the gates of town, wave goodbye to a few wooden sculptures of historic Slavs, standing guard. Also, wave goodbye to some wooden Dali-esque Easter Island heads. Those are my favorite.

This is the highlight. A municipality of about 35,000, this beach town draws scores of tourists in the summer - but in the winter, it's faintly deserted. It has three distinct parts - a more historic district with older, quaint wooden homes and a touristic bazaar, a drag of villas for rich holidaymakers, and the humble suburban homes where the locals actually live. Oh, and a glorious beach. You'll have the whole nine-kilometer beach to yourself in January. Watch the palm trees shudder in the wind! Go up into the historic part of town where all the stucco houses are, and buy a plate of" hamsi" - fried anchovies. Maybe shop for the famous cotton shirts produced here, the Şile bezi. In the town, far above the beach, you'll be able to find as many motels and fish restaurants as you can handle. The best ones are all clustered near the Şile Feneri, the biggest lighthouse in the entire region of Istanbul. 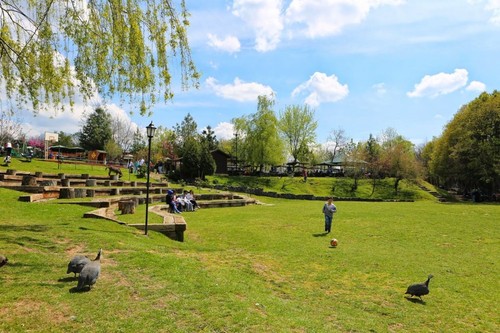 On our trip, we found a motel just as the sun was setting. The patron offered us tea and we watched an utterly bizarre version of "Turkey's got talent" in the lobby, in which all of the talents were gross. The first guy twisted his arms and shoulder blades around in circles, and that blotted out any memory of the second guy. The second thing was an onstage makeup application where the artist made her willing subject look like, in front of an audience and judges and with the greatest slowness, a man who had been shot in the eye. One of the Turkish guys deadpanned at us: "Culture."

We left the motel, and in the cobblestone plaza night, a family was lighting tiny hot air balloons. They were globes of red and blue paper shaped with cane, with a flaming coal suspended in the middle. A few people gathered round, watching them inflate. The blue one got enough lightness to start drifting along the ground, and then one of the men started tossing it into the air–until it finally started to rise, to shoot up. We cheered and people started clapping. And then we saw the little flame going straight for the top of a minaret–closer, and closer, and it got caught on the tip. And a wind picked up, and tossed the little balloon off the minaret and into the night. People cheered again. A strange Turkish man came up to me, and clapped me on the shoulder. "God has accepted it," he said, in what must have been the only English he knew. We laughed. "Make a wish!" I heard someone say, or maybe I said it. The balloon sailed away into a quiet sky over the Black Sea.

The Asian coast of the Bosporus

Back in the old days both sides of the Bosporus Strait were home to dozens of tiny fishing villages where the residents would pluck stuff out of the sea and nap all day. Over time, as the city's founders grew in wealth and prestige, they planted their mansions, called "yalı," on either side. Sultans and foreign dignitaries and successful merchants all wanted a piece of straitside land.

The villages have now all become connected and dependent on the larger choking metropolis, and yet most have managed to retain their charm. It used to take all day to get up to the Black Sea; now you can get to most villages in Beykoz in about two hours. And if you wedge yourself into the traffic, the scenery turns nice, fast. 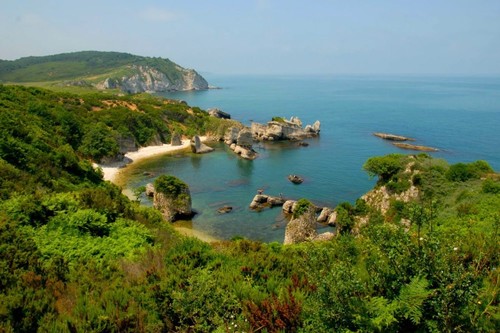 Çengelköy is just north of the first Bosphorus bridge on the Asian side. What do they have? Incredible börek at the Çengelköy Börekçisi. Cheese with walnuts and onions in perfect flaky pastry. Or the mince pastry with tiny currants, pine nuts, and a touch of spices. You take a big box of börek and walk in between antique wooden yalis to an open-air tea garden built around a massive plane tree. The tea garden's right on the water, too, and the tree has been lovably propped up with bit iron supports. About a hundred years ago, a branch did snap off and kill someone though. Don't think about the killer tree. Enjoy the view. And the börek. 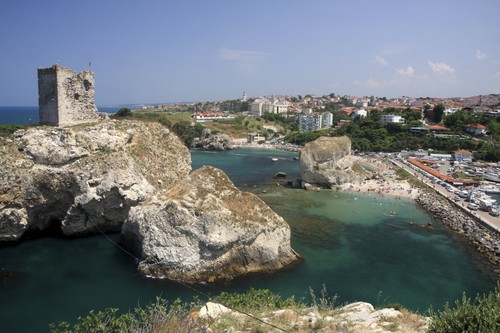 Up further is Anadolu Hisarı. One of the castles built to defend the narrow strait, Anadolu Hisarı now is a better place to hang out in one of the boat restaurants in the canal, snacking on fish. Göksu Creek is full of creaky old picturesque boats and cranky old fishermen mucking about, but they cheer right up when you say you'd like some dinner. The castle is now on either side of the motorway, and there's a playground right at its foundations. Like many curious old relics of the city, life continues around it. It's one of my favorite places in the city, especially at sunset - with the sky going pink against the reedy riverbanks, the crumbling castle, the wooden boats, and castle and neighborhood of Rumeli Hisarı, all lit up on the opposite side.

This is where you'll have to turn off the road. You could continue straight up to the knob of coast sticking just before the Black Sea at Anadolu Kavağı, which is a perfectly decent choice. They've got more than their fair share of antique yalıs, as well as a much larger castle, Yoros, perched on a hill. The street sellers do better fried mussels there than anywhere else in the city. Or, you could turn off, and head towards Poland.