Smoke on the Orient Express: A panorama of the Turkish landscape and its people 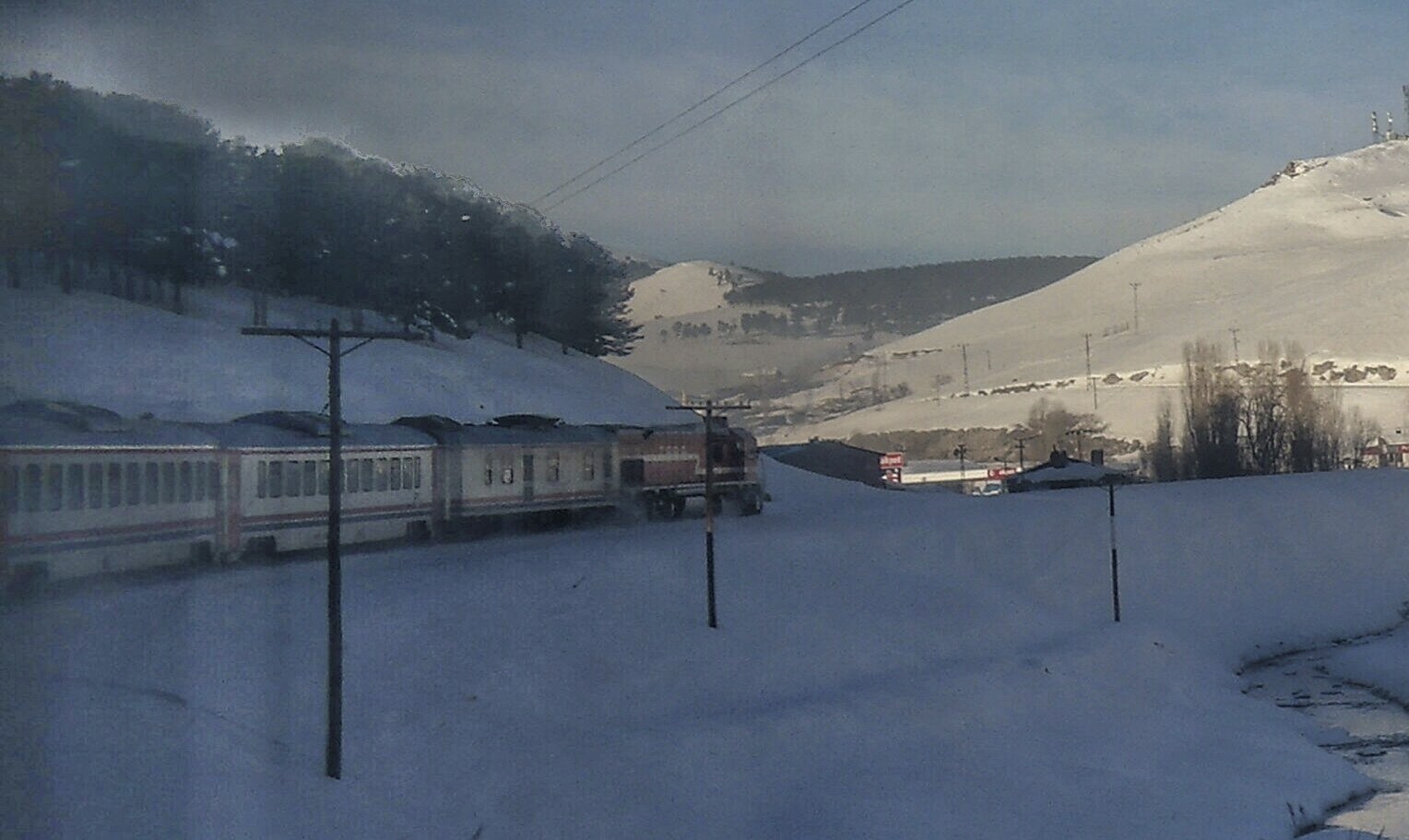 Dou011fu Ekspresi starts off in Ankara and travels the length of Anatolia for 24 hours, and after a single stop in Erzurum, deposits you in Kars train station, an imposing Russian building.
by Nagihan Haliloğlu Jan 23, 2018 12:00 am

The supposedly fast train from Ankara to Kars, the ‘Doğu Ekspresi,' has recently become the hottest domestic travel destination. While the proper Ankara-Kars passengers complain about not being able to find tickets because of the tourists that have colonized the route, happy bloggers and Instagrammers make the most of the journey, recording every minute and sharing it on social media

When I booked my Kars trip that involved a ride on the "Doğu Ekspresi" (East Express) in December, I did not know what I was getting into. A beautiful shot of a white train with red and blue stripes snaking its way on a bridge with a snowy background appeared on my Facebook feed, and I did not think twice before calling the tour operator to reserve a place for myself and my mother. It was the great opportunity I had been waiting for: I had long wanted to go on the Trans-Siberian Railway, here was a long train journey on terrain that even the Rough Guide described as "Turkey's version of Siberia." The journey would also mean revisiting Ani, a place that had enchanted me when I visited in the summer of 2016. It was mid December, and no snow had fallen in Istanbul yet, so it would, I hoped, also mean that I would also see some snow. 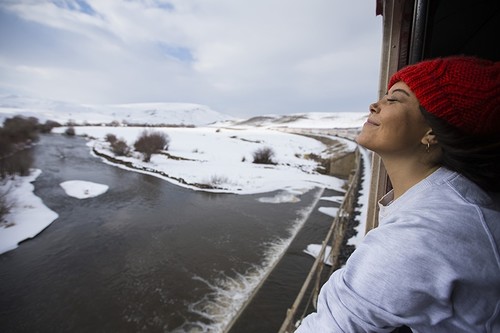 Clearly, I had not got the memo. A few hours after I called the tour operator and paid the money, a message appeared on their social media account saying that the first tour of January was completely booked but that there were a few places left for February. The friend whom I had ecstatically informed that I was going to do my own (mini) "Trans-Siberian" trip at long last started sending me tweets and memes about the phenomenon that is the "Doğu Ekspresi." One of the tweets said "Why are you all going to Kars on the train? Are you all Kazım Karabekir or something?" Kazım Karabekir being one of Mustafa Kemal's friends who led the armies against the Russians. A meme showed Harry Potter and Ron Weasley on the Hogwarts Express eating snacks with the caption "Harry Potter and his best friend on the Doğu Ekspresi." This meme turned out to have a lot of truth in it because as I would later find out, the train was full of babes who ought to have been at their desks studying for their finals. When I checked the social media account again, I saw two rather unseemly posts accusing the tour operator for selling tickets that were TL 100 ($26) for TL 1,000, saying it was a rip off and calling them unsavoury names. There seemed to be something fishy going on. 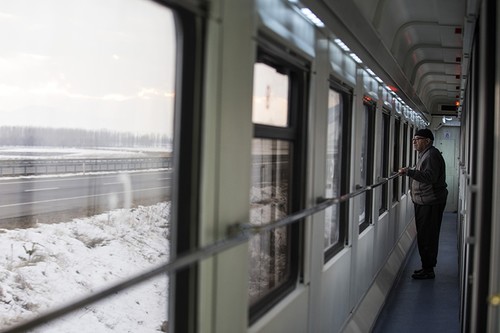 Doğu Ekspresi, a name I am happy to translate as the Orient Express, starts off in Ankara and travels the length of Anatolia for 24 hours, and after a single stop in Erzurum, deposits you in Kars train station, an imposing Russian building. Like other transcontinental trains, its original purpose is to carry people living at the far ends of the country to and from bigger markets and administrative centres. It turns out while I was not looking (that would have been when I was reading up on and dreaming of traveling the Trans-Siberian) a fad among the Instagram and blogging crowd had appeared in which bright young things "did the Orient Express" and took a thousand pictures and posted a million boomerangs while they were doing it. The demand for tickets was so high that people who actually used the train for proper travelling purposes, getting from A to Z, found it difficult to get tickets, particularly because tour operators such as the one I had used were buying tickets in bulk. Friends kept sending me more and more information about the phenomenon, giving me to understand that I had unwittingly become a part of the grinding and rolling wheels of capitalism that made a mockery of the real supply and demand chain. Those wheels did indeed come to a halt several times during the journey because Turkish Railways had added four extra carriages to meet demand.

There are three tiers for travel on the Doğu Ekspresi: The usual seats, four and two sleeping couchettes. I thought it would be only right to treat myself and my mother to a two sleeper compartment. We flew into Ankara, took a shuttle to the train station, and then a further shuttle to another station, Irmak, in the countryside near Ankara. A strange crowd had gathered in this provincial station: Lazy people like me who had let a tour company organize the whole trip, tourists who had miraculously been able to book their tickets themselves online (apparently the website often freezes when you try to get tickets) and then the people who were actually trying to get to Erzurum or Kars - or I like to think there were at least one or two. Instagirls dressed up to the nines, couples with dreadlocks, and one young woman who seemed to have jumped out of a "society magazine" with her ice skates dangling from either side of her neck. She must have been expecting to skate on Lake Çıldır outside Kars, but the tour's WhatsApp group had already informed us that horse sleighs on Çıldır would be impossible because for the first time in years the lake had not frozen enough this season to carry the weight. Everybody was filming and taking pictures: I thought I would also take a picture of the now iconic "Doğu Ekspresi" plate on the train but when I approached our carriage there were already 10 people waiting in line to pose next to it. 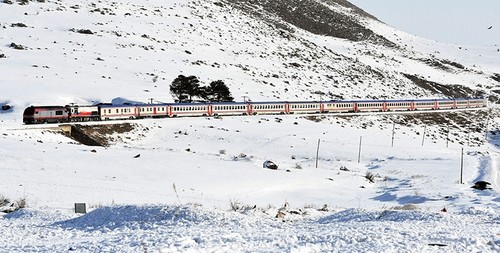 When we entered the carriage we saw that our compartment was the perfect IKEA dream, with foldable beds and table. Just as we prepared to sleep, my troubles began. Someone was clearly smoking in the carriage despite the fact that the very conductorly-sounding conductor had told everyone that it was a strictly nonsmoking carriage. The smoke seemed to be seeping through the walls as I tried to sleep. I could hear people socializing in the corridor, offering tea and börek (Turkish pastry) to one another. They commented on the "Please don't smoke" message I'd sent to the WhatsApp group in desperation. They made light of my message indignantly, saying a nonsmoker should have known better to travel on a long distance train. In my moral outrage I stayed awake in bed, and must have gone to sleep toward the morning. When I woke up after my nicotine infused drugged dreams, my face felt like I had plunged it in a tar pit. I looked outside to see we were passing through a very beautiful and melancholy country indeed. It had been a warm winter even in the "bozkır" (steppe) and there was no snow. Reddish earth, trees blackened with age and red at the branch tips, and the yellow grass that seemed especially colour coordinated for a fashion shoot. Near Sivas we passed through huge red rock faces that made one feel like one was on an adventure film set, and then we entered a region that looked particularly forlorn with its ramshackle villages. My mother and I wondered what possible livelihood these people could have and the question was answered not long after when we passed an equally forlorn train station called Demirdağ (Iron Mountain) - this was the hinterland of mining country. The GPS came and went, and so I had to trust a small map I had brought along. We imagined that the very green-looking river that accompanied us on the journey must be what we call Yeşil Irmak (Iris), Green River, but a map check revealed that it was the Euphrates, and I was surprised to see this river associated with the Middle East so up north. 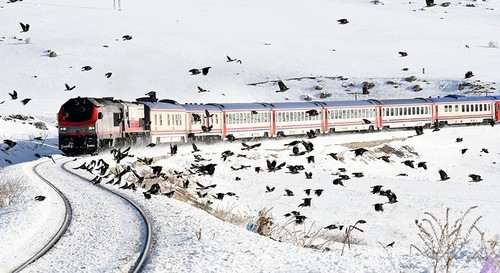 When the smoke got too much to bear I went to the corridor to check out the usual suspects. At certain points on the journey people congregated in the corridor to photograph a piece of scenery that was not remarkably more scenic than all the other stretches of the route. Fancying myself a bit of a Poirot, I weighed each and every passenger, to glean who it was that filled the carriage with infernal smoke. It was, undeniably, those who did not come out of their compartment on these occasions. I kept a cool face as people pointed out falcons, foxes and a wild boar to one another. The river that passed now on our right and now on our left was punctuated by several dams and two gentlemen passengers considered the profitability of setting up their own. 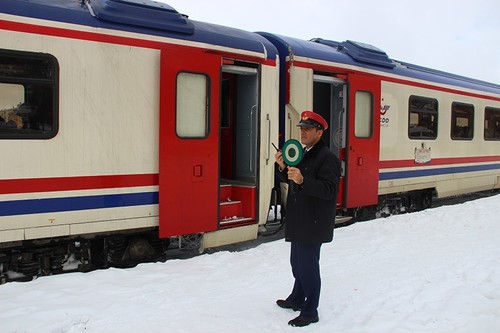 Near Erzurum the long-awaited snowy scenery started. Then, it took the sun about half an hour to set, washing the white covered landscape in a pinkish hue. I spent the last hours of the journey mostly tiptoeing by the glass panes, in order to bring my nose to the level of the tiny windows to breath in some fresh air. I mused that while the Turkish "Orient Express" seemed to be propelled by cigarette smoke, its Russian counterpart, the Siberian, would probably be propelled by vodka fumes - and I couldn't decide which was more unbearable. I looked at my co-passengers to try to guess once again who was responsible for making this beautiful journey almost unbearable for me. Naturally, Agatha Christie had got it right. It wasn't a single person. It was the whole carriage that had sided with the smoker(s) and had found me at fault for complaining. However, the joys of the experience must have outweighed the discomfort, for I found myself already wondering about other long-stretch train journeys I might do, discovering the wonderful and hidden corners of the varied landscape that is Anatolia.