Cape Town: A vibrant city with unique nature on the edge of Africa 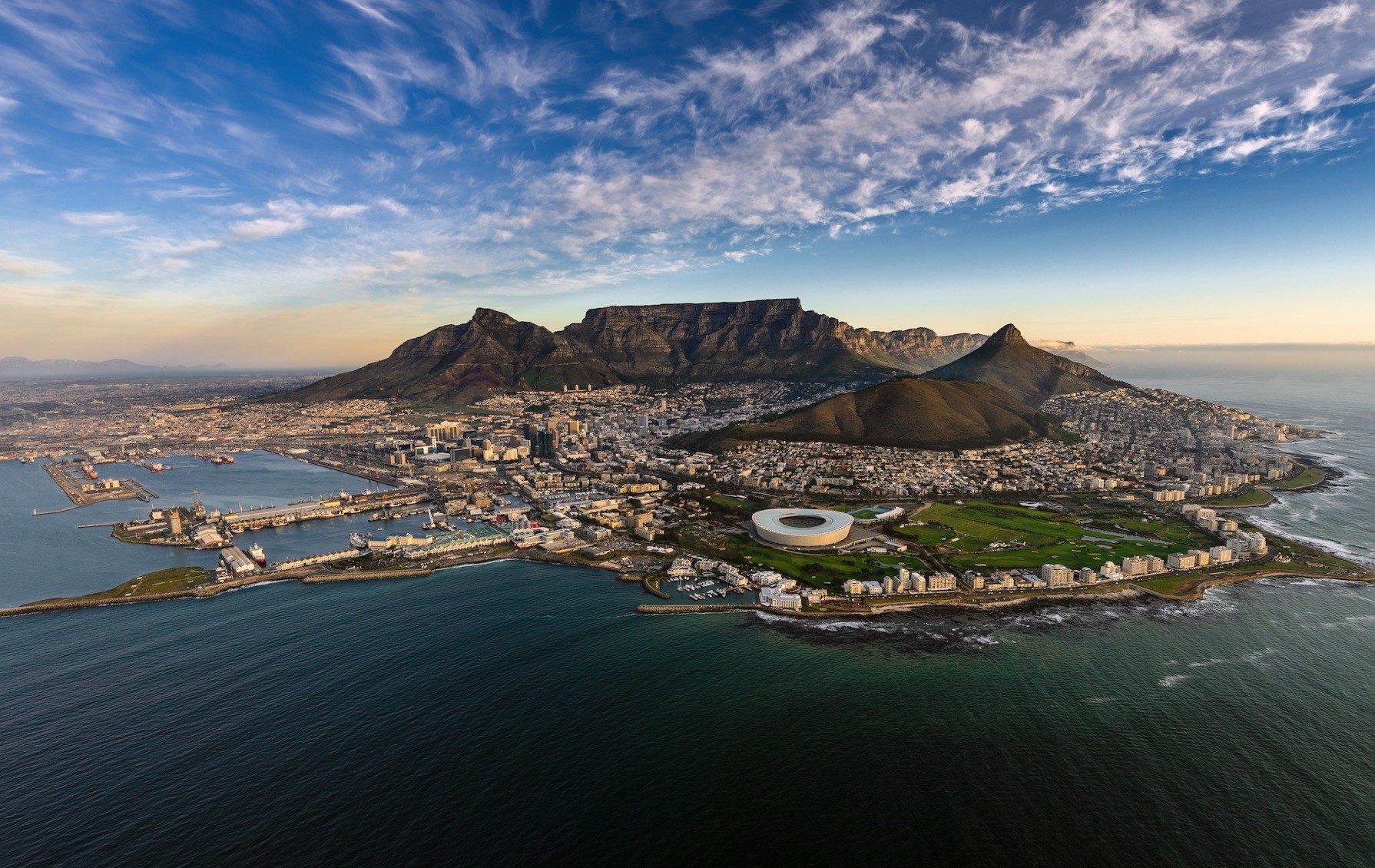 It is exciting to be here. I prefer to practice in Cape Town in the winter because it offers the best extreme sports conditions to prepare myself for the hardest. I am a professional wind surfer and a world champion.

I travel the world because of my exciting work, compete on the world tour with the support of Red Bull and pursue the winds and waves for my workouts. That is why I am mostly a marine migrant these days.

When I am not in the sea, I discover the surroundings of places and cities where I go and write travel articles. And, I have been making a new vlog recently.

My routine in Cape Town

The day starts in Big Bay on the western coast of Cape Town.

This is the place where the wind is the hardest and where you can see the magnificent scenery of Table Mountain, which is worthy of being featured on postcards. The strange and smooth form of this mountain is the symbol of the city. So, do not forget to take a picture of that mountain and the smaller Lion's Head hill next to it while you are on one of the long and white sandy beaches of western Cape Town.

Big Bay is a beautiful bay. There you can sit down at the cafes or restaurants and enjoy the scenery, as well as take surf courses, rent out a surfboard and outfit and go out to the sea, and view the scenery over the ice-cold Atlantic Ocean.

The waves are usually low on the left side of the bay, so if you are just starting, you have to row here to get around without submerging. But beware, Big Bay is on the windy western coast, and it is not easy to surf and paddle on the surf when it is windy. So, choose to surf in the morning, when the wind is often quieter.

My favorite cafe in Big Bay is a branch of restaurant chains called KUAI... They make delicious fresh juices and smoothies. They also have a wonderful selection of light meals and breakfasts.

If you get the shivers when you put your foot in the water, I suggest you go to Muizenberg. The water in this region, which is located on the eastern side of the peninsula, is a few degrees warmer. The Cape Peninsula is surrounded by two different oceans, the Indian and Atlantic Ocean. If you are in Muizenberg, you are by the Indian Ocean.

Muizenberg hosts many surf stores. Known for its relaxed style, Muizenberg is a place where most people come to learn swimming or surfing. The waves here are soft and the water is warmer. So, the sea is mostly crowded. Ironically, the False Bay, where Muizenberg is located, is famous for its white shark population, and is National Geographic's most frequent destination for capturing wildlife photographs where white whales chase the seals. There are even some shark-watching organizations on Muizenberg beach and on some beaches by the Indian Ocean. The colorful shark flags show how close the sharks are to the swimmers and surfers in the sea.

Muizenberg has a series of steep cliffs, which are very popular for rock climbing. Another memorable feature of Muizenberg is its colorful wooden beach huts. In the past, people could rent these small houses for their shade and use them to change their clothes freely. Now these huts are mostly closed and only create a nice background in tourist photographs.

Next to Muizenberg is Kalk Bay, one of my favorite gulfs on the Cape Peninsula. Walking through this bay, which is full of small alternative fashion and arts places and cafes, you can browse the shops and buy a different souvenir, rather than an ordinary refrigerator magnet. The buildings in the district are all built in the old colonial style.

There is a very old railway on the eastern side of the peninsula, as well as old-fashioned railway stations in every bay. The trains are still running regularly. The restaurant named Cape to Cuba is very nice, right next to the railway line. The decor and location of the place is great, even if you are not hungry, you can take a little break here to browse.

A different color for everyone

In Cape Town, you can have cultural experiences on the one hand, and you can enjoy a life away from society, surrounded by wild nature and the ocean, on the other. Or you can experience all of them at once in the same day. Many restaurants and bars are genuine in the real sense. For example, Gin Bar is both a chocolate shop and a gallery. At the same time, there is a place with a laundry facility, cafe, and postcard shop. Even more interesting, there is a bar where you can repair your motorcycle and listen to live music! Another must-do is to visit Biscuit Mill in Woodstock which turns into a fair on Saturday mornings. There is live music and a lot of booths offering typical gourmet food from around the world. If you are lucky enough to be in Cape Town on the first Thursday of the month, you can witness a special day in the city. On that day, art galleries are open till late hours and the city center turns into a huge urban party. The bars carry their own DJ sets to the street and many roads are closed to traffic. So, you can go from one gallery to another, look at the latest works of art and dance in the street! Just make sure that you keep your valuables close because it is also a popular time for thieves. 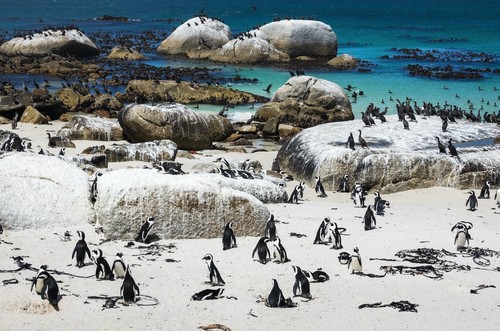 Another stop on my personal tourist route is Penguins of Boulders Beach... Right next to Simon's Town and a little south from the Kalk Bay, there stands a sign for the Penguin Observation House on the beach, so it is impossible to miss it. Park your car and watch the wild penguins. I suggest you take a walk here. When you go to the right side of the bay and turn the corner, you will leave the people behind and find yourself with a pair of penguins probably viewing the Indian Ocean on a rock. However, this is just the beginning of the feeling of wild life. If you drive a little further south, you will reach Cape Town National Park.

Here you can visit the southernmost edge of Africa and see baboons, wild African monkeys and ostriches. You may even see wild game animals like springboks and kudus. The best part about my visits to this park is that I always see wild baboons! Actually, I go to Cape Point very often because I love to wind surf here. On my last visit, the baboons jumped on my car, which had a surf board on top, and decided to hang out there for half an hour. In the meantime, everyone else was around my car, taking photos of the monkeys on my board! Another time I forgot to roll up the window of my car and a baboon went into the car.

It found a raspberry-flavored surf polish on the back seat and after getting a big bite from it, it sat in the driver's seat for a while. Then it got out of my car and went to explore the other cars! In a nutshell, do not leave your windows open while you are here, and never leave anything outside of your car. You may think that monkeys are cute, but there are actually signs everywhere: "Be careful! Monkeys are wild and dangerous animals." These animals, which lose their sweetness out of the blue when they show off their teeth, are definitely not afraid of humans... Wind surfing in Cape Pink represents the peak of this unspoiled nature experience. Waves are stronger than other parts of the peninsula. The water is cold, but it has a magnificent blue tone. When you look at the coast from the sea, you can see the white sandy beach, cliffs and virgin scenery. Although the temperature is above 25 degrees, the wind blows almost from the poles. It is extremely beautiful, but at the same time it is so harsh and you can feel the forces of nature more than many other places.

As the sun approaches the horizon 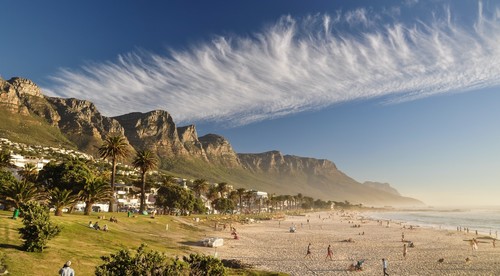 While continuing from Cape Point and touring the Cape Peninsula, I recommend you pursue the famous route called Chapman's Peak, which is famous for its landscape. This is a narrow mountain route that runs along the steep cliffs of the southern peninsula. The route starts in a small fishing town called Hout Bay and takes you to Clifton and Camps Bay. The steep cliffs go down to the deserted Atlantic Ocean and the road stretches round these cliffs. In the summer, the sun sets around 8 p.m. One of the best places to watch the sunset is Signal Hill's summit. It is actually a very popular place among Cape Town residents. While picnicking here, they watch the sunset over the Atlantic Ocean and the city lights slowly illuminate the City Bowl on the foothills of Table Mountain. This is the greatest way to end a trip around the Cape Peninsula. Signal Hill is part of the Cape National Park and is perfect for a short hike.