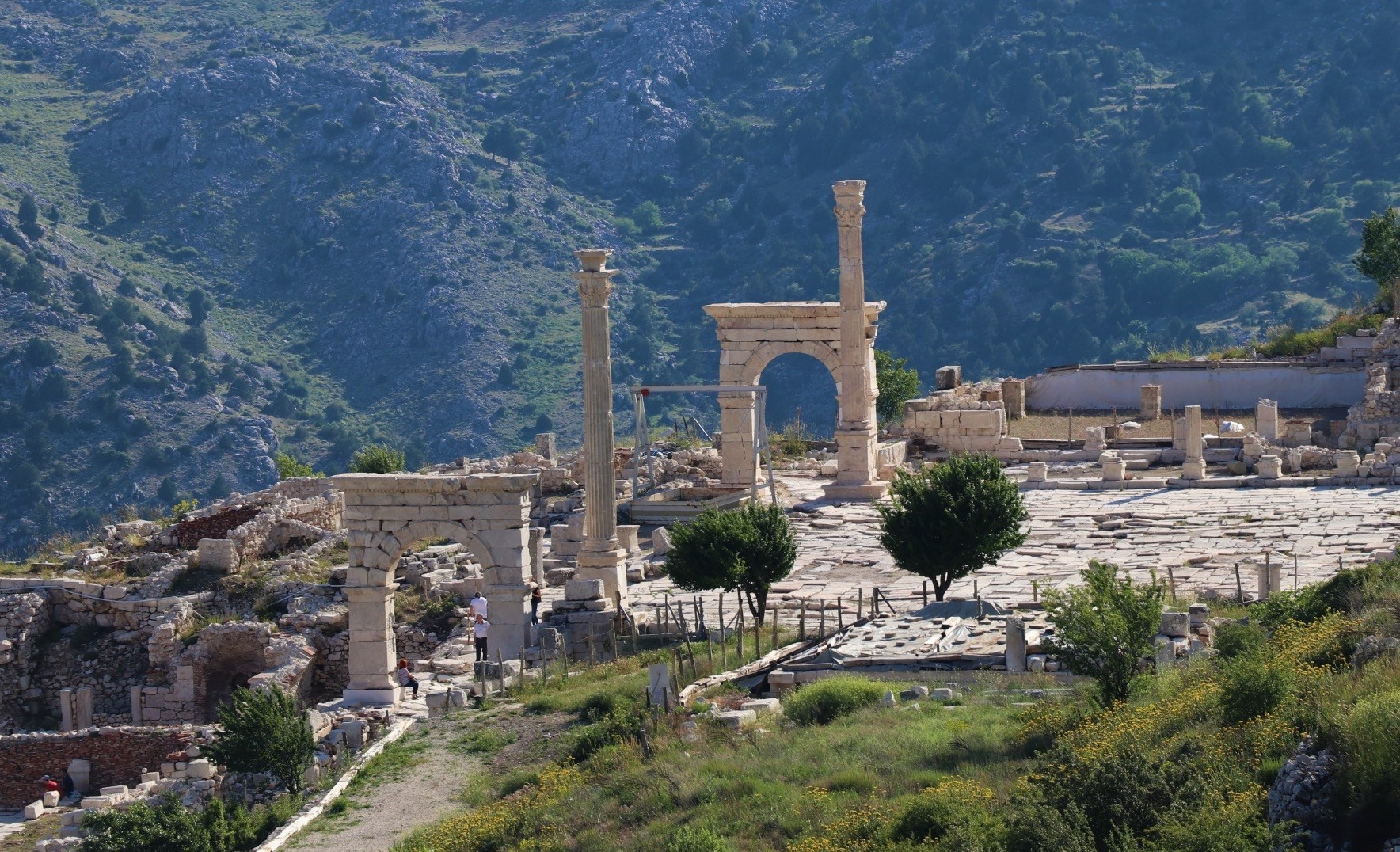 One of the important cities that Alexander the Great had difficulty in conquering, Sagalassos reflects the best examples of Roman architecture.
by Anadolu Agency Jul 04, 2018 12:00 am

Tucked away in Burdur province's Ağlasun district, Sagalassos, known as ‘the city of love and emperors,' takes its visitors on a historical journey

Datingback to 3,000 B.C. and added to the UNESCO Temporary World Heritage List in 2009, Sagalassos takes its visitors on a journey back in time with its 5,000-year-old streets.

One of the important cities that Alexander the Great had difficulty in conquering, Sagalassos reflects the best examples of Roman architecture.

Excavation work in the ancient city, which was one of the main five ceramics production centers of the period, was initiated by Belgian professor Marc Waelkens from Leuven Catholic University in 1989.

After Waelkens' retirement, professor Jeroen Poblome took over the excavation.

Lying 1,750 meters above the sea level, the city looks over deep eerie valleys and mesmerizes its visitors with its Antonins Fountain, where water has been running for thousands of years, its agoras, Roman baths, Macellum structure, Heroon structure decorated with dancing girls, its library and theater with a capacity of 9,000 people.

Feyzullah Eray Dökü, a lecturer at Mehmet Akif Ersoy University's Archaeology Department, spoke to Anadolu Agency (AA) noting that the ancient city of Sagalassos was discovered by European travelers in the 18th century and its map and structures were revealed in the 19th century along with its name.

Dökü underlined the point that the city was located in the region known as Pisidia in ancient Greece and today it is known as the region of lakes and is an important settlement both in terms of science and aesthetics. 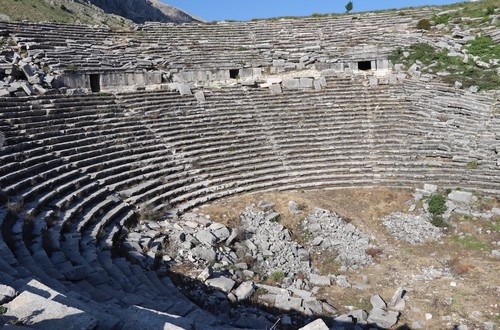 The ancient city has a theater that could hold 9,000 people.

"It lies on the slopes of the Taurus Mountains," Dökü noted.

He also added that the city shows the Roman structures which cannot be expected from a mountain city and that when Romans came here, settlement was initiated first during the reign of Emperor Augustus. In the reign of Emperor Hadrian, Sagalassos became the first city of Psidia and an ally of the Roman Empire.

"The structures you see today are huge constructions built during the Roman period," he said.

The history of the city dates back to the Chalcolithic period (5,000 to 3,000 B.C.) and had not started with the Roman Empire at an age when copper and bronze were used together.

Dökü explained that highly populated settlements were also observed in the Hellenistic period in the city.

"It was equipped with great structures for the promotion of being a Roman Empire citizen during the Roman Empire times. Another characteristic of the city is that Sagalassos was one of the cities that resisted Alexander the Great when he visited Anatolia," he said.

"At the time of Emperor Augustus during the era of the Roman Empire, the city started getting richer and it became a city where the gates lead to greater structures. The first settlement is what we call the agora. There are shops, roads and Tiberius there. Then, if you continue upward you will encounter the fountains and right next to the fountains, a very grand Roman bath. If you move further up, you can see the shopping areas and will arrive at the most magnificent area called the upper agora. There, the Antonins Fountain greets you," he added.

One of the most striking structures of the city is the Antonins Fountain, which was completely destroyed after a severe earthquake and was restored as a 400-building block structure with the placement of approximately 3,000 stones where ancient water lies today. Dökü pointed out that another feature that differentiates Sagalassos from other ancient cities is its innovation and success in restoration.

"When you climb to the theater, you can see the valleys Sagalassos has dominated. The most important sources of income, red primed ceramic and pottery neighborhood await you behind the theater. The ceramics cooked here were sold even to Egypt," Dökü noted.

The city of love, objections and emperors

Mehmet Özdemir, Director of Provincial Culture and Tourism, said that works continue at the city for it to become a part of the Permanent UNESCO World Cultural Heritage List and that the city is known as the city of love, objections and being one of the emperors favorite cities.

It was believed that water drunk from Antonins Fountain made people prettier and those who drank from this foundation fell in love. Özdemir added that while they were aiming for 35,000 visitors, the numbers exceeded this level.

"This year, we believe the numbers will rapidly increase, currently the number of visitors has exceeded 13,500 with the start of the season. We are expecting more than 50,000 visitors by the end of 2018," he said.

Özdemir further expressed that Sagalassos is drawing more attention from locals and tourists with each passing day and therefore, the Ministry of Culture and Tourism has allocated funds for improving its roads and included the city in its 2018 investment program.

Professional tourist guide from Istanbul, Zafer Özcan stated that walking down the streets of the city, visiting its theaters and temples was like a journey in time.

"The city settled on a high slope produced grains and ceramics and at the same time had a rich cultural life and built a magnificent theater. You can still hear the sound of water flowing in front of the ancient fountain. The city is waiting to be discovered by its visitors. I recommend those visiting Burdur to make their route through Sagalassos," Özcan said.

A textile engineer who came to visit Sagalassos with his friends from Denizli, Sultan Cihan also said that they loved the city and wished it was promoted more.

"I have visited many places abroad but we need to be aware of the presence of such a place in our country. That is why we are trying to explore it with our children," he said.

A dentist from Antalya, Gülçin Bilecen, noted that they traveled to the city to spend the weekend.

"It is full of energy and it is great. It is not a tiring trip; you can travel with slow steps. Tourists of all ages can easily visit this place. It is a nice feeling to know that somebody else has lived here. Its theater is very different from what I've seen so far. I definitely recommend that people visit here," Bilecen said.

A teacher from İzmir, Nilhan Yalazı noted that she was very much impressed with Antonins Fountain, which she said was so much more impressive than it looked in photographs.