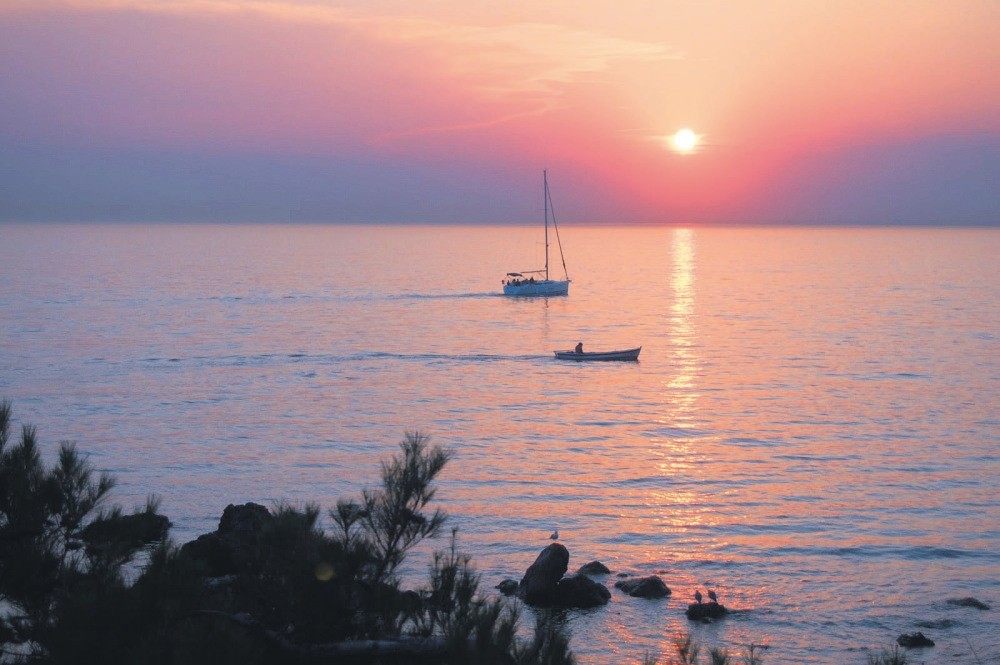 The breathtaking sunset over the famous Madam Martha Bay.
by SİMAY KESKİNTEPE
Jul 07, 2018 12:00 am

Living in a big city like Istanbul often requires some quick timeouts. The Princes' Islands, in particular Burgazada, can be a great getaway destination

For someone who has been living in Istanbul for years, keeping up with the city is always frustrating at the end of the day. We try to run away from the chaos of the city by going to the gym or finding a quiet corner at a coffee shop but it is still a struggle and not satisfying with the traffic and lack of fresh air making it even worse. It feels like there is no escape where ever we go. But it is a shame for all of us to miss out on the hidden heaven of Istanbul's Princes' Islands, even though they are just a ferry ride away.

Among the islands in Istanbul, Burgazada is the only one that still preserves its poetic, humble and precious beauty where the blue and green mingle in a colorful mosaic. Its openhearted locals and pleasing structure welcomes you as soon as you get off the ferry. Surrounded by pine trees and wooden houses, it is one of the most beloved places in Istanbul. The prettiest wooden houses are located on the part of the island that faces Heybeliada and Kaşıkadası, which are the other islands surrounding Istanbul. These wooden houses host both the Rums (Anatolian Greeks) and families from Istanbul who have been spending their summers on the island for generations.

Named after a former commander of Alexander the Great, Burgazada was called "Antigone" in historical texts. Demetrius Poliorcete named the island after his father Antigonus when he sailed to the Marmara Sea to conquer the empire and to free the Bosporus. However the name of the island was transformed into Panormus over the years, meaning "sheltered harbor." After the conquest of Istanbul the island was named "Pyrgos" in Greek, which means "castle." In time this name changed to Burgazada.

As the ferry gets closer to the island, you start to see the cylindrical structure and dome of the Ayios Ioanis Orthodox Church and the little fish and meze restaurants under wooden houses. You should start your day early in the morning to witness the charm of the island as the day turns into night (believe me, both the day and night carry a unique spirit).

My irrepressible curiosity takes me to the Ayios Ioanis Orthodox Church as soon as I jump out of the ferry and step onto land. I follow the big dome with the friendly dogs of the island and finally find the big, marble church. Located on Takımağa Street, the church was first built in 842. The church was rebuilt a few times over the years but after the devastating earthquake that took place on July 10, 1899 it was ruined. Its brick windows with two or three arcs still bear the Byzantine architectural style. When you reach the main galley of the church, a gilded wood carving icon wall welcomes you in, adding to its magnificence is the patriarch throne. Old oil lamps hanging around the church and angel figures and icons make it more fascinating. It is dedicated to St. John the Baptist. The cell where Methodios I of Constantinople was convicted is also visible.

"I would go mad if I did not write"

Even though I have visited the island many times before, I am often unable to complete my island plans and go back home with a heavy heart when I do not visit the house and, now museum, of the great Turkish writer Sait Faik Abasıyanık. You can easily reach the house, which is located a step away from the church. Burgazada had always been his inspiration. Reading the island through his words will take you away from the real world. It is always a delight to see Burgazada through his genuine words. He spent most of his life at this house, he became ill in 1945 and died on May 11, 1954. Considered a landmark writer in Turkish literature, he devoted himself to writing. His short stories included narrations on the sea, nature, children, poor people, the unemployed and fishermen, always written with a humanistic, sensitive, honest and modest touch. You can see a great part of his life and the things that touched his great works: his iconic fisherman head, seashells, fishhooks and his personal books and letters. The museum is open on Wednesdays to Sundays between 10:30 a.m. to 5:00 p.m. and is free of charge.

The Madam Martha Bay: Where green merges with blue

If you happened to see a young man or a woman with a big backpack looking around, they are probably searching for Madam Martha Bay which is a popular place for camping and swimming for those who want to feel invigorated in the cold waters of the Marmara Sea.

You need to be a little patient on a hot day while walking to Madam Martha Bay, since the route is winding as you walk under the pine trees. Named "Halikya" back in the day, Madam Martha Bay may be the most beautiful place on the island. As you walk, you will start to see the shining blue water that swash the pebbles along the green of the shore. Do not hesitate to explore the bay: An old islander, who builds miniature boats from rocks and bits and pieces that wash up on the shore, lives close by in his cabin. Go inside, meet him and get ready to be impressed. There is a small highland on the right side of the bay, and is the best place to watch the sunset and relax. Thanks to bad reception, your phone will leave you alone at this point, hence a great way to stay in the moment. There will be friendly dogs around that would love to host you while you are enjoying the great view and swimming. To keep this natural beauty in peace do not forget to take your trash when you are leaving the bay. In the last few years it has been a great problem for the island. The island gives us a big warm welcome so it would be so cruel to leave it polluted.

Cultures, religions melt into each other

Burgazada's colorful cultural mosaic can be felt at every corner of the island as they are nested together: church, synagogue, cemevi (an Alevi house of worship), monastery and mosque. The Burgazada Camii is the only mosque on the island, it was built in 1953 for the memory of the 500-year anniversary of the Conquest of Istanbul. Designed by the architect Burhan Ongun, it is a domed, eight fronted mosque.

You can add the St. George's Monastery on your route, which is a beautiful Greek Orthodox Church (Aya Yorgi Monastery). It is said that it was built in 1728. It was a shelter for the Belarusians after World War I. Due to a big fire on the island most of the east part burned down. Thanks to Ayios Ioanis's water pump, islanders saved the other half. The monastery was damaged again in the 1999 earthquake but has since been through a series of renovation staring in 2004.

Everyone needs a cup of coffee, snacks, food

Wandering around the streets of Burgazada, you might find yourself a little bit tired and you will surely need to catch your breath and charge your battery... with coffee. As a coffee person, a cup of iced coffee is needed while I am discovering the island. I would strongly recommend for you to visit "Four Letter Word Coffee" to have perfectly brewed coffees.

The salty island breeze makes you hungry but the island itself offers you a feast from morning till night! As a great example let me tell you about an encounter. It was an early morning breakfast, when I first met with "galetacı." The man was wheeling his wagon under a red and white striped umbrella, I was hanging out of the balcony like

a child waiting for the ice-cream track but this was even better. His wagon was full of "galeta" hard cracker breads and sweet braided cookies. He was wheeling his cart on the streets shouting "galeeeta" in his own tone. So grab the "galeta" and fill your cup with the tea while the sun smiles between the pine trees and the birds are singing.

After your excursion around the island I now point you towards the gates of heaven: Ergün Pastanesi. Just in front of the ferry station, you will see the happy and satisfied faces of islanders biting into puff slices with custard and strawberries.

You will also encounter ice cream everywhere, but I would recommend that you follow tradition and stick to the popular Yunus Dondurma's nostalgic wagon in front of the Burgazada Sea Club. Get ready to taste delight when having your rose shaped sorbet ice cream!

As I grew up in Istanbul, seafood is such an important part of my appetite. Thanks to my friends and their lovely families, my favorite place has always been the Fincan Cafe. The owner of the restaurant is a marvelous couple; Ms. Canan cooks wonderfully and Mr. Rasim is so generous! I highly recommend for you to dig in to the warm starters and the cold mezes. Do not hesitate to try the grilled octopus, shrimp casserole, salted fish, sea weed salad and "tarama," they are going to be the best ones you have ever had.

The marvelous sunset and going back

When the sun starts to go down and sweet tiredness hits you, I recommend my favorite locations to watch the sunset.

Hristos, also known as the Bayraklı Tepe, is one location to see the breathtaking view from the top of the island. Once you reach the top, take some time to listen to the birds and your inner voice.

As you are filled with wonders and memories, please do not forget to check the time, because I have forgotten it many times before and missed the ferry. Visit the websites İDO, Şehir Hatları and Mavimarmara's and check departure times.

If you visit the island in the wintertime do not forget about our friendly dogs and cats that always welcome you as soon as you get off the ferry and accompany you every second of your day on the island! Since most of the islanders leave Burgazada in the winter these animals stay without food and water, so be sure to bring something along for these furry friends.

Let me assure you; Burgazada is a natural wonder and a cultural mosaic. No matter what, you will love it here as soon as

you hold the island in respect and peace - the same way it holds you!