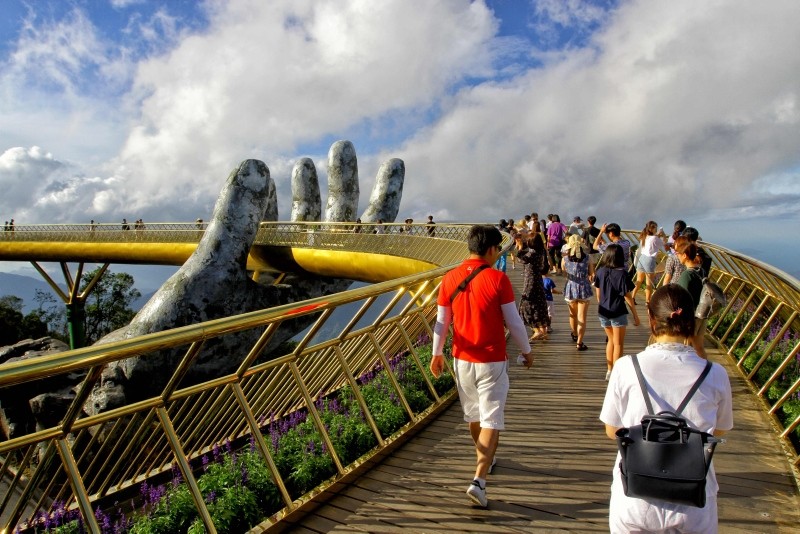 Designed to make visitors feel like they're taking a stroll on a shimmering thread stretching across the hands of gods, the "Golden Bridge," or Cau Vang, has attracted hordes of guests eager to see a novel piece of architecture famed for its unusual design since it opened in the Ba Na Hills near Danang in June.

The pedestrian walkway, designed by TA Landscape Architecture in Ho Chi Minh City, sits at over 1,000 meters (3,280 feet) above sea level and extends over the treetops from the edge of a leafy cliff face, offering tourists uninterrupted views of the majestic landscape beneath.

Images of the bridge have gone viral on social media, much to the surprise of the architect who had no idea it would attract so much attention.

"We're proud that our product has been shared by people all over the world," principal designer and founder of TA Landscape Architecture, Vu Viet Anh, said. "It creates a walkway in the sky, among the foggy and fairy-like lands of Ba Na mountain." 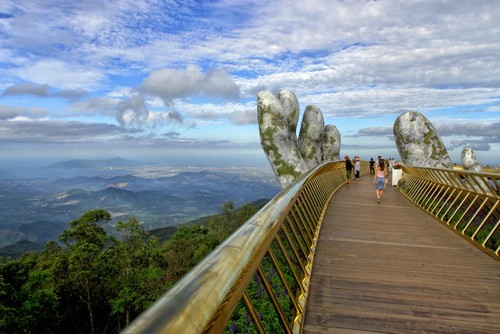 At 150 meters long (490 feet), the bridge snakes through the forest high up in mountains first developed by French colonists as a hill station in 1919.

The only remnants of the original French occupants are the crumbling remains of their holiday homes that can still be spotted from the cable car.

But visitors are mostly interested in the newly built Cau Vang, which means "Golden Bridge" in Vietnamese.

"The bridge is beautiful with an amazing architectural style, from here we can see Danang City, it's so nice," Nguyen Trung Phuc said.

Another visitor, Nguyen Hien Trang, said, "I have traveled quite a lot but I've never seen any bridges as beautiful as this one."

The Ba Na Hills project was built by Sun Group, which has divided opinion with audacious projects elsewhere in Vietnam.

In 2016 it opened a cable car on Vietnam's tallest mountain Fansipan in the tourist hotpot Sapa, prompting complaints from locals who felt it spoiled the landscape and took business away from trekking guides.

Vietnam is no stranger to off-the-wall attractions.

A "crystal cloud" installation of 58,000 shimmering Swarovski beads in the rice-terraced hills of northern Vietnam opened earlier this year, while the surreal "Crazy House" hotel in central Da Lat, designed to look a trippy treehouse, has long attracted legions of curious visitors.

The communist country has long sought to boost visitor numbers and position itself as a must-see destination in Southeast Asia.

It clocked 13 million foreign visitors last year, mostly from China — a far cry from the 35 million international visitors to Thailand in 2017.

Golden Bridge designer Anh said he already has another project in the works: a silver bridge made to look like a god's strand of hair that will connect to his existing structure in the Ba Na Hills.