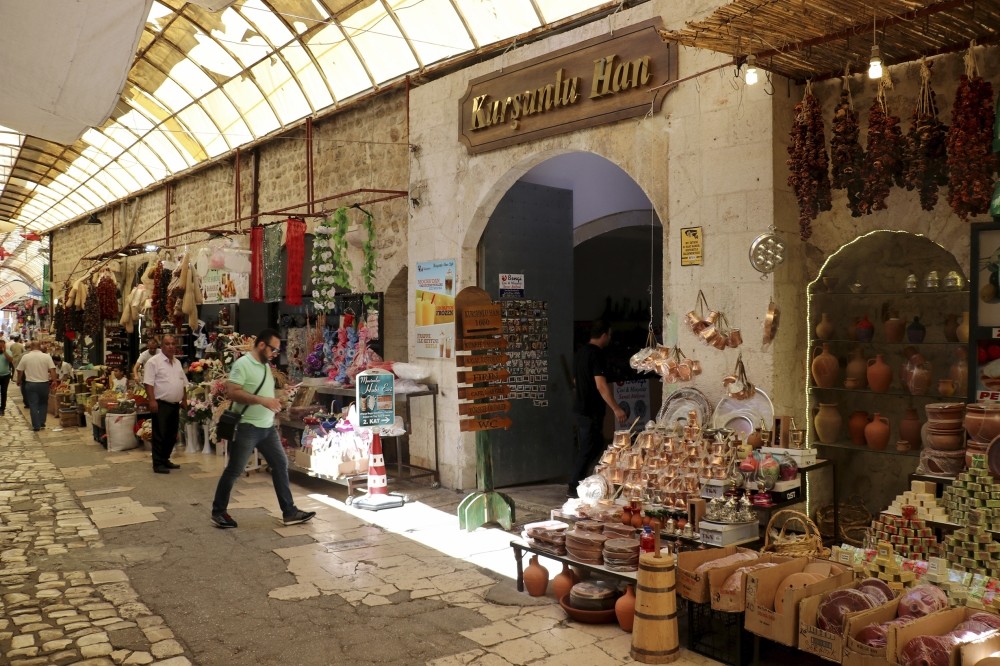 The historic Antakya Long Bazaar in Hatay is famous for its local and traditional goods from spices and herbs, to jewelry, carpets and antiques

Antakya Long Bazaar, one of the important symbols in Hatay province in the south, where people from different religions, sects and ethnical cultures live in peace, tolerance, brotherhood and harmony, draws attention with its narrow streets, colorful shops and people density.

As the bazaar is located on the historic Silk Road, it has been the center of trade since the old days. It is known as the place where the heart of trade beats in Antakya, the central district of the province.

The Long Bazaar, which features inns, baths and mosques, houses people of different professions. The exact date when it was built is not known.

Kurşunlu Inn, which was built in the 17th century in the bazaar, wins the recognition of people.

It is possible to find indigenous products and tastes, including laurus soap, olive oil, licorice sherbet and künefe, in the bazaar, which has been serving to people of the city for centuries.

One of the meeting places of local and foreign tourists, the Long Bazaar is the life-line of the city's economy. Thousands of people visit the bazaar, which is nearly 3.5 kilometers long, every day.

Artisans from various religions and sects

Hasan Ali Sevinç, the president of the Long Bazaar Foundation, spoke to Anadolu Agency (AA) and stated that Hatay's historic Long Bazaar has great importance for the city.

Records dating back to the Ottoman traveler Evliya Çelebi's time show that the bazaar was home to three hundred artisans in the past, while the number is more than two thousand for the time being, Sevinç noted.

"The bazaar is home to artisans from various religions and orders. It attracts great number of local and foreign tourists especially in summer months. There are three inns, three baths and mosques in it," he said.

Referring to the deep-rooted history of the bazaar, Sevinç stated that the establishments in the bazaar were inherited by the descendants of the artisans.

"No matter how the establishments were started to be run mostly by the younger generation, it is still possible to come across artisans busy with the old crafts such as coppersmith and saddle working," he added.

The head of the Antakya Shoe Sellers Bazaar Foundation, Ömer Gürbüz, noted that they do their best in the Long Bazaar. Stressing on the deep-rooted tradition of the bazaar, Gürbüz added, "All our fathers and grandfathers were artisans here in the bazaar and we are neighbors in the same neighborhood. What's more, we are neighbors even at the graveyard. In other words, it is an everlasting neighborhood what we experience. Just like a family, we meet at the same table every lunch. Every day we set a lunch table with food prepared at our homes. We thank God in the aftermath of the lunch. Here we stand as an example of pure unity."

Gürbüz also noted that they will hand down the respect, love and the warm relationships to the following generations.

Serving as a tinman at a small shop in the bazaar, 55 year-old Nebil Muratoğlu said that he is proud of pursuing his ancestor's occupation as the third generation.

Saying that he is the only tinman in the bazaar and he is practicing the profession with love, Muratoğlu said, "I'm the third generation tinman in the Long Bazaar. Thank God, I'm proud of my profession and happy while practicing it. I will go on serving as a tinman as long as I can.

Künefe under the centuries-old tree

Visitors of the historic Long Bazaar have a chance to taste künefe, which is among the best desserts of Ottoman cuisine and also a registered taste of Hatay, in addition to witnessing its making process.

With a strong scent coming from shredded wheat and a specific salt-free cheese, künefe attracts visitors to come taste it under a centuries-old plane tree.

Künefe master Mustafa Sertbaş, 65, said that he has maintained the tradition of making the dessert for years in the Long Bazaar.