All aboard: Set sail for Aegean, Mediterranean bays in September 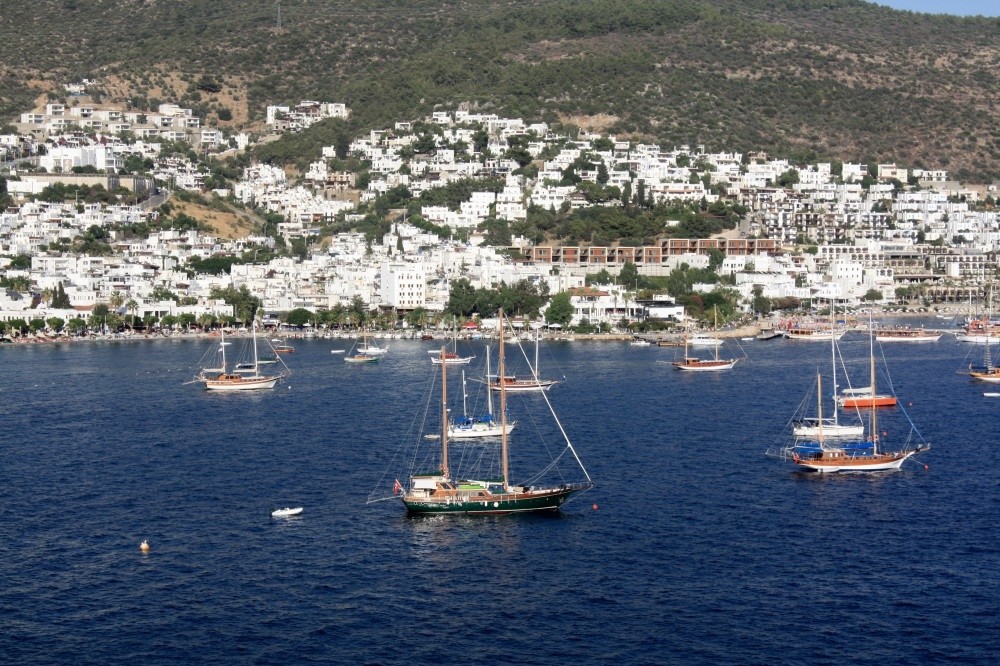 If you think summer is over since September has started, you couldn't be more wrong. Now is the time to set sail for the most beautiful bays on Turkey's Aegean and Mediterranean coasts

Autumn is the end of the summer for some while it is the best time of the year for others. With the coming of September, nature presents itself to us in a different manner. The beautiful bays of the seaside towns are clear of holidaymakers. Coasts are left to those who want to enjoy autumn after summer time holidaymakers have returned to the city. Although the majority of people may think otherwise, September is the best time for sailing. Turkey is such a beautiful country that the coasts in the south continue to embrace visitors until November. There are many reasons to go the "Blue Cruise" way in the autumn. Here are some reasons why:

Price: Prices are much more affordable than in the summer season. Prices start to decrease as September starts. If you make an early booking and find an empty boat at the last minute, you can rent them at half price.

Fewer people around: It can be difficult to find a boat that is proper for you and your expectations in the summer months because all the boats are full. However in September, the boat that you want is most likely available.

Empty bays: One of the biggest problems of blue cruises in the summer months is not finding a place to anchor at bays. Far from anchoring at the pier of small bays, it is even hard to find an area to anchor offshore. Let's say you find a place to anchor but what about the noise of the crowd? In autumn, this crowd dies away suddenly. Beautiful bays stay with their tranquility and quietness.

Weather: In September, the dog days of summer are over. You open your eyes to the coolness of the morning and need to wear a thin cardigan after sunset. You enjoy the warm sea in the mornings. Besides, the cool weather makes you springy.

Tranquility: In autumn, the Aegean Sea reaches tranquility. The wind abandons its scaring strength and becomes a sweet breeze. Sailing in these conditions is a great joy, as well. If we convince you to make a Blue Cruise journey in the autumn with the factors that we have explained above, the rest will be choosing an appropriate route for yourself.

Oasis in the middle of crowded Bodrum

As you go down from Didim, the Güllük Gulf shines bright like a jewel. Even if it is overshadowed by Bodrum - one of the most popular holiday towns in Turkey - it has its loyal visitors. Güllük, which is the center of the gulf where there are many large and small bays, is actually a neighborhood in Milas district. The gulf and the bays inside are an oasis for those who want to escape from Bodrum's crowd. Sadun Boro, the first Turk who sailed around the world, wrote in his book "Vira Demir" (Weight Anchor) that the Güllük Gulf has a total 37 bays. Kıyıkışlacık-Iassos, Ülelibük-Varvil, Gök Port and Yamand, are among the most-visited bays of the gulf along with the main bay. Another advantage of the gulf is that it is close to the Bodrum Milas Airport.

Close to wind; safe for anchoring

There are many bays that do not get too much wind, are safe for anchoring and embraced by pinewoods in the Gulf of Gökova, which was known as the Gulf of Kerme in the past. When you go down from Akyaka to Çamlı Port, Gökova continues and you pass many bays including: Sedir Island, which is famous for its pearl-like sand, Karacasöğüt in the green forest, Çanak Bay, Değirmen Bükü, İngiliz Port, Okluk Bay, Sadun Boro and Löngöz. There are many other unique bays that we have not mentioned. This is a route in which you can color your Blue Cruise by walking among olive and pine trees after anchoring your boat.

Bays of pinewoods in Göcek and surroundings

We can say Göcek is an inland sea more than a gulf circled by pinewoods, decorated with bays and dozens of islands like lacework. It is a destination for a unique blue cruise. When you sail from the center, where many marinas are located side by side, you will find yourself on the lap of nature. On the east coast of Göcek, Atbükü, Boynuzbükü, Killebükü, Taşyaka, Sıralıbük, Sarsala, Manastır Bay, Hamam Bay and Göbün are imprinted like a pearl. Near the gulf, Göcek, Yassıca, Tersane and Domuz Islands are sprinkled. Each of them presents a different beauty. You can enjoy the blue color, swim in the clear water of the Gulf of Göcek, breathe the fresh air and walk in the forest dotting the coasts. Another good thing about Göcek is that it is only 20 minutes away from Dalaman Airport.

Aegean at its best as the sun goes down

Bays on the nearly 226-kilometer-long coast of Datça Peninsula, which separates Gulfs of Gökova and Hisarönü, present different experiences. One of the most impressive points of the peninsula is surely Knidos Port. As a safe port for boats, Knidos offers a different adventure with its antique city and turquoise waters. If you visit Knidos and trust your legs, you can climb up to the lighthouse on the top and watch the endless Aegean Sea during sunset. Datça Peninsula, Kargı Bay, Domuz Bay, Palamut Bükü, Hayıt Bükü, Kızıl Bükü, Ova Bükü, Çiftlik Bay and Karaincir Bay will create an enjoyable route for your journey.

Bozburun: The secret heaven for sailors

Hisarönü Gulf starts from Datça and reaches the Bozburun Peninsula. When you enter the gulf, Gönlücek Bükü, Hurmalı Bük, Bencik Bay, İnbükü, Orhaniye, Sığ Port, Selimiye, Kızbükü, Kocabahçe, Dirsekbükü welcome you respectively. These bays host hundreds of boats every summer as they are one of the most-preferred routes of the Blue Cruise. There are both shallow ports and also harsh seas inside the gulf. It is full of surprises. One of the most beautiful and most-preferred bays of the gulf is Orhaniye. You will be satisfied to enjoy the nature of Orhaniye, where green and blue mingle.

Do not miss the chance to visit Kaleköy and Kekova

The Gulf of Fethiye, the most southern of Blue Cruise routes, is located after Göcek. As the mountains are vertical, bays are quite deep and most of them do not allow for safe anchoring, particularly at night. We can list the most-visited bays of the Gulf of Fethiye as Samanlık, Tarzan, Turunç, Akvaryum, Sarıyarlar, Kızılada, Kelebekler Vadisi, Ölüdeniz and Gemiler Island. Kaleköy, where ancient Simena city is located, and Kekova are the must-see places. As the Gulf of Fethiye is hotter than other regions, it is an extremely good place for blue cruises in the autumn.