Khiva, a legendary city in the heart of Central Asia 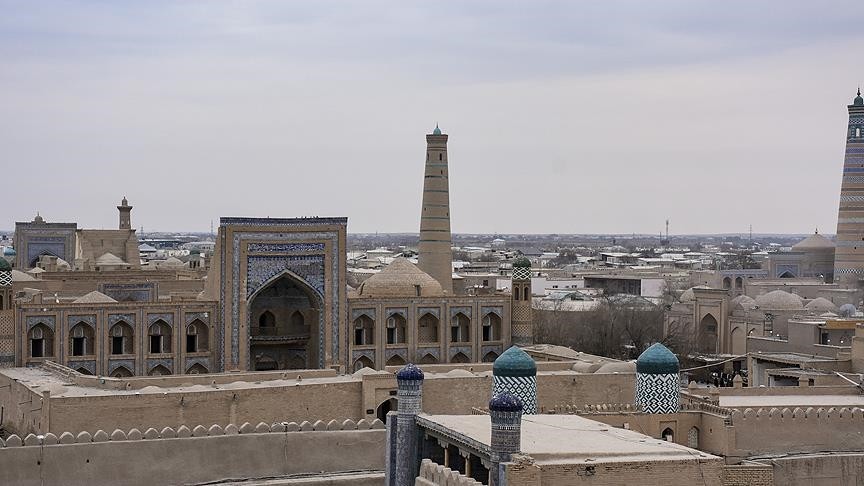 Ichan Kala, the walled inner town of the city of Khiva, Uzbekistan, is a UNESCO World Heritage.
by Anadolu Agency Dec 29, 2018 12:00 am

Although the Silk Road glory days of the city of Khiva, Uzbekistan, might be over, the city still offers guests the chance for a fairytale-like adventure

Those who visit Khiva province, the pearl of the Khwarazm region in west Uzbekistan, are astonished by the well-protected history they can see.

This charming, archaic city, dominated by earth colors and red, has a very different atmosphere and unique architecture compared to other cities in the country. People walk its narrow, stone streets on a long journey into the past with its maze-like structure.

The city is important as the place where Muhammad ibn Musa al-Khwarizmi, the founder of algebra, algorithms and the number 0, and Abu Rayhan Muhammad ibn Ahmad Al-Biruni, known for his work in the fields of astronomy, mathematics and natural sciences, were born and raised.

According to rumor, in Khiva, one of the oldest cities on the historic Silk Road, travelers would drink excellent water from a well and exclaim: "Khey Vakh!" (What a pleasure!). In time, "Khey Vakh" became Khiva.

The city, which many states tried to capture in the past, was the capital of the Khanate of Khiva in the 17th century. It came under the control of the Soviets in 1873. To visit the city, called "the open air museum under the sky," visitors arrive at Urgench after a one-and-a-half hour flight from the capital Tashkent and then drive 45-minutes to Khiva.

Surrounded by two intertwined walls, the city challenges time and modernism. In Khiva, most of the inhabitants live in the new city settlement, which is encircled by the outmost walls, only some of which still remain and is called "Dichan-Kala" (Outer Castle). The old city settlement, where a smaller community lives encircled by the remaining walls, is known as "Itchan-Kala" (Inner Castle).

The most impressive part of Khiva in terms of the architectural and visual aspects is "Itchan-Kala," which has no new structures. On every street of the old city, it is possible to come across a large number of cut-cone-shaped minarets adorned with blue, turquoise and green tiles, two-story madrasahs, the summer and winter palace of the ancient khan, a mosque where nearly 2,000 people can pray and earth-colored structures.

The most attention-grabbing element of Khiva is that the city was built entirely with horizontal architecture. In the old city, about 3,000 people live inside the castle and have protected the clothes, dishes, local dances, dialects, traditions and customs.

Visitors that enter from the West gate, one of four gates in the castle, are first welcomed by souvenir shops where local products are sold. After a few meters, a map of Itchan-Kala drawn on stones in turquoise and earthen colors can be seen. Then visitors must see the Mohammed Amin Khan Madrassah and Kalta-Minor Minaret, in front of the madrasah. This two-story madrasah, which has a large courtyard and well, is now used as a hotel, which has maintained its historical texture.

The exterior wall of Kalta Minor, which was to be the biggest and most magnificent minaret in the region was left half unfinished when Mohammed Amir Khan died, is decorated with tiles of blue, turquoise and yellow. The minaret is known as the mark of Khiva. Look carefully at buildings adorned with tiles inside the castle to see Arabic letters written on each of the painted square stones to look like a jigsaw puzzle. While walking the streets of Khiva, you can see couples in bridal gowns and suits having photos taken in front of historical buildings and praying while visiting the tombs of important figures. These couples continue the ancient customs of Khiva, adding a different color to the castle, and dance to traditional music, while walking with friends before the wedding.

One of the most striking structures in the old town is the Pehlivan (Wrestler) Mahmud Mausoleum, which is decorated with tiles in blue tones and visited by many every day. The legendary hero Pehlivan Mahmud, who was born in 1247 in Khiva, was a poet and writer. He never lost any of his wrestling competitions and distributed all the money he earned

to orphans and the poor. There is also a well in the garden of the mausoleum, with the graves of Pehlivan Mahmud and some khans.

The 212 wooden columns in the Juma Mosque fascinate visitors. No two columns are alike and the wood reflects the skill of the masters. The columns are so well placed that no column covers another when they are looked at from the minbar, and everyone that prays can see the imam. There is an open space for ventilation and lighting in the ceiling, a small pool in the center, and a small domed fountain. This large mosque, where approximately 2,000 people can pray, is now a museum.

The dialects spoken in the Khwarazm region are very close to the Turkish spoken in Turkey. People who see that Turkish visitors can easily understand some words that a person from another region of Uzbekistan cannot understand are very surprised.

Local and foreign tourists can taste local dishes at restaurants run by the warm and hospitable people of Khiva in the castle. Various types of tea, such as root tea (green tea) or black tea, are served in small porcelain teapots along with food.

Among the tastes that visitors should try, the region's authentic bread is the leading one. The bread, called "nan," is made in an old-fashioned way in tandoors made from stone, and the bread dough is decorated with different motifs. The bread can have various flavors, such as zucchini, meat and potato and does not go stale for 30 days.