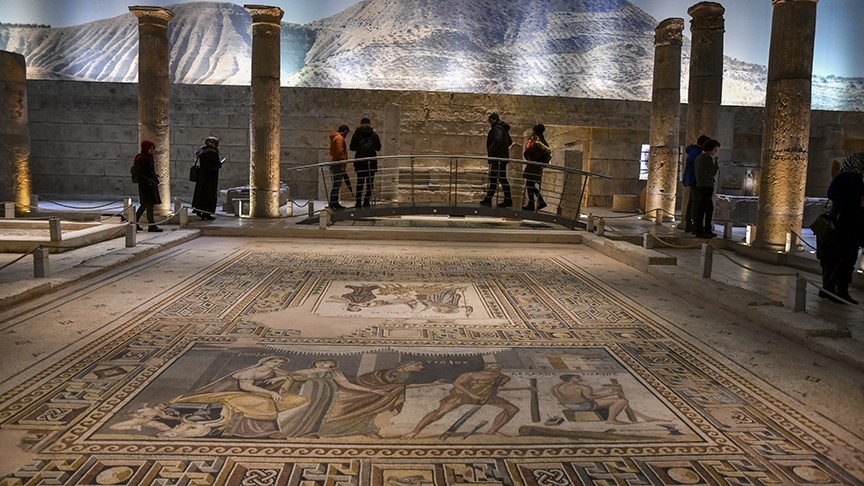 Zeugma Mosaic Museum in Gaziantep is one of the major tourist attractions in the city where the famous ,Gypsy Girl, mosaic is on display.
by Anadolu Agency Feb 02, 2019 12:25 am

If you are up for a holiday where you can trace mankind's history while enjoying some of the most delicious food in the country, we invite you to discover the ancient cities of Gaziantep and Şanlıurfa in southeastern Anatolia

Gaziantep and Şanlıurfa, two important cities in southeastern Anatolia, have recently been competing with each other in the tourism sector. Since the region can be very hot in summer, tourists usually prefer to visit these cities in winter.

Feast for your eyes, stomach

Gaziantep, which is often described as "a gastronomy capital" as it has been included in UNESCO's Creative Cities Network, is often the first city on the holiday route of tourists who want to explore the region.

Featuring dozens of museums, particularly the Zeugma Mosaic Museum, home to the famous "Gypsy Girl" mosaic, whose pieces were recently brought back from the U.S. The city also offers many historical and cultural attractions, including the Coppersmiths' Bazaar, Elmacı Bazaar and Gaziantep Castle.

Tourists can also visit Gaziantep Zoo, the biggest in Turkey, and observe some species in their natural habitat in the Safari Park. Gaziantep's surprising flavors and cuisine also await the visitors. The city boasts a rich food culture and people get the chance to try some unique breakfast. They would start the day with "beyran," a soup cooked with lamb at a high temperature and flavored with vinegar, spices and garlic, and then will eat katmer, a fried, layered bread where pistachio and kaymak, a creamy dairy product similar to clotted cream, meet. Yuvalama soup, onion and garlic kebab, şiveydiz, lahmacun and chickpea wraps are among the musts for visitors. They will also have the opportunity to try various kebabs, like küşleme, and nearly 400 local foods for lunch and dinner. In the evenings, many types of baklava that will add sweetness to your visit to the city that vacationers often describe as a place where gaining weight is guaranteed.

Visitors can return to their hotels to rest after drinking Turkish menengiç (terebinth) coffee, one of the local tastes. Gaziantep Mayor Fatma Şahin told Anadolu Agency (AA) that the region has a very rich heritage in many different fields, including history, culture and gastronomy. Implying that they will continue to promote the city for local and foreign tourists, Şahin added: "You need to have good cuisine and to trust in your home when you invite a guest. We trust our home and potential. We invite all Turkish people here, saying that if they are bored of the sea, sand and sun, come enjoy nature full of historical heritage and traces of Seljuks, Ottomans and their works, come to this region."

She then emphasized that the city has nearly 500 kinds of foods and continued: "We are the capital of flavors. We expect those who enjoy rich cuisines to love our area. The way to a person's heart is through his/her stomach. We would like to welcome everyone to the southeastern Anatolia region, to Gaziantep, by combining our gastronomy with cultural values."

History of humanity waits for you

The second stop vacationers prefer in the southeastern Anatolia region is Şanlıurfa, "the city of prophets," especially for its gastronomy and religious tourism.

Göbeklitepe, which was registered on the World Heritage List of UNESCO in July, is flooded by local and foreign tourists in every period in the city.

The archaeological site, which transports its visitors 12,000 years back in history, waits for its guests as well.

After Culture and Tourism Minister Mehmet Nuri Ersoy announced that they will declare 2019 the "Year of Göbeklitepe," all eyes interested in history have been drawn to the archaeological site.

Göbeklitepe, which is a major tourist attraction in the city, is easily accessible and just 20 minutes away from the city center.

The city, where the temperature does not drop below 10 degrees Celsius in winter, offers an opportunity to its visitors to wander around the unique beauties in spring-like weather.

The most important haunt of the city that comes to the mind first is the historical Balıklıgöl (Fish Lake), which according to legends features is the birthplace of prophet Abraham. Balıklıgöl, which is on the UNESCO Tentative List, is among the most important religious centers of the city, along with being the biggest natural aquarium in the world.

Harran district, another nominee for UNESCO's World Heritage Tentative List and identified with its conical-domed houses, is also flooded by thousands of local and foreign tourists with the ruins of the Great Mosque, dating back to the period of Umayyad, and the first Islamic University. 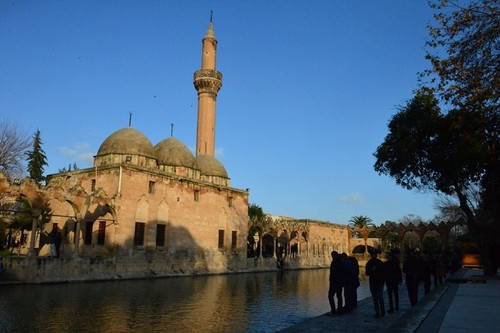 Balıklıgöl, "The Pool of Scared Fish," in Şanlıurfa is believed to be sacred as it is the place where Abraham was thrown into the fire by Nimrod and saved by God.

Accepted to the Cittaslow network by the Cittaslow International Coordination Committee with its quiet, peaceful features, Halfeti district, which was half-submerged because of Birecik Dam, is among the favorites of the city.

Karacadağ Ski Center, which is at an altitude of 1,919 meters in the Siverek district, known as "the Mount Uludağ of the southeast," offers an opportunity to holiday goers to have an enjoyable time.

Şanlıurfa Chamber of Commerce and Industry (ŞUTSO) Tourism Professional Committee President Kamil Türkmen told Anadolu Agency (AA) that the city is one of the rare cities where people can comfortably holiday in winter.

Noting that the city can host everyone who loves nature, history, thermal and ski tourism, Türkmen continued: "In our region, gastronomic, thermal, skiing, archaeological and museum tourism are promoted as well. We invite everyone to drink, eat and visit. Our city is not a place that can only be visited in only one season like other regions. It can be visited throughout the whole year. There is great potential for history, nature, skiing and thermal tourism here. Those who want to benefit from this potential are all invited to visit."