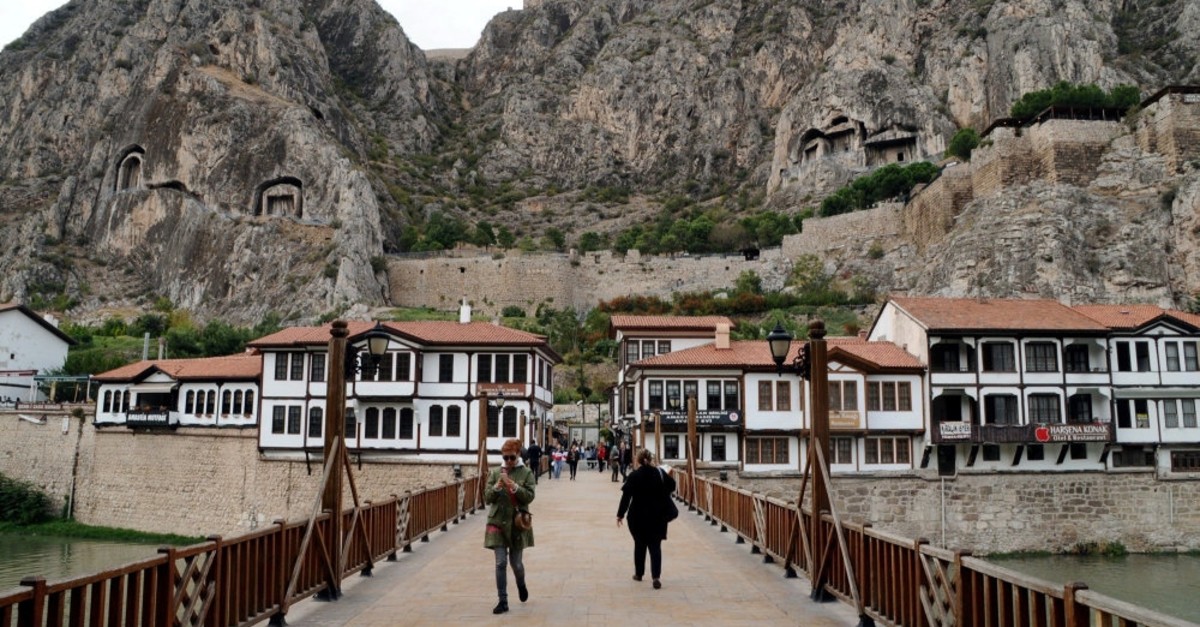 The rock-cut tombs of Pontus kings overlooks historical houses dating back to the Ottoman era.
by Daily Sabah Apr 27, 2019 12:03 am

Blessed with splendid natural wonders and history going back to the antiquity, northern Turkey deserves to be discovered bit by bit. This week, visit at the Central Black Sea region

Every corner of Anatolia boasts natural beauty, combined with historic landmarks. But the Black Sea region has a unique aura that invites visitors to uncover its wonders. Attracting thousands of tourists every year, each part of the region has its own unique culture as well as natural beauty and the remains of different civilizations.

In this second part of our Black Sea tour, Daily Sabah kindly invites you to take a journey to the central Black Sea region, where the woods are thick and history rich.

Not all love stories end with fairies casting magic and nymphs dancing to celebrate lovers. Ferhat fell in love with Princess Şirin, but he needed to win her father's permission and favor. So, he decided to open a long tunnel through the legendary mountains of the Black Sea to bring spring water to the king's palace. However, while working on the tunnel, Ferhat was lied to and told that Şirin had died. In grief, he threw himself onto the rocks. Şirin, upon learning her lover's fate, also died a few days later.

This folk story originated in Amasya, the ancient city was founded by the Hittites. Having been ruled by various civilizations throughout history, including the Phrygians, Cimmerians, Lydians, Persians, Armenians, the Greeks and the Ottomans, Amasya is a perfect place to trace history.

Royal tombs of the Pontus kings: Amasya was shaped by the Yeşilırmak River and the most striking view of the river is the rock-cut tombs of the Pontus kings. Cut deep into the limestone as early as the fourth century B.C., the tombs are illuminated at night, which provides an even more striking view of the river bank. Currently, the site features nearly 20 tombs of different sizes.

Gök Madrasah Mosque: Named after its turquoise tiles, the Gök Madrasah Mosque is a perfect example of 13th century Seljuk architecture. Built for Seyfettin Torumtay, the Seljuk governor of Amasya, the building also features his tomb. The tomb adjoining the mosque on its west wall has a rectangular prismatic body of finely dressed stones and covered with a 16-sided pyramidal roof rising on a tall octagonal drum of brick, all rising taller than the roofline of the mosque.

Over the last couple of years, the happiness meter of Turkey points the same city: Sinop. Hailed as the happiest city in Turkey, Sinop has all the things that can put peace in your mind and a smile on your face.

Sinop has come to the forefront with its nature tourism, especially in the summer months with its sea beaches as well as its historical and cultural riches. It is among the most prominent cities of the Black Sea region with its forests, bays and streams. The city hosts millions of tourists every year and its pristine nature continues to draw even more people every year.

Founded as a major colony by Miletian colonists in the seventh century B.C., Sinop was the birthplace of third-century philosopher Diogenes the Cynic. The city has a lot to offer to visitors.

Pervane Madrasah: Founded in the 13th century by Seljuk Grand Vizier Muinüddin, Süleyman Pervane was built in a geometrical shape, with a marble entry and octagonal central fountain. For those who want to enjoy the atmosphere, the complex now features a cafe as well.

Gerze: This spot is located on the junction point of where blue meets the green trees of the Black Sea region. A part of the international Cittaslow (slow city) network, Gerze is famous for its turquoise waters that make visitors feel like they are not in the Black Sea but in a Mediterranean town. Apart from exceptional beaches, this tiny little town offers a lovely local market where you can buy the freshest fruits and vegetables as well as local flavors and the tomb of Çeçe Sultan, where people usually stop by to pray.

Samsun is the city of long coastlines, quiet and peaceful streets and endless delicious food. Featuring fertile lands fed by both the Kızılırmak and Yeşilırmak rivers, Samsun, which is also a natural port, has been the center of civilization and trade for centuries. The city is so ancient that it is even the subject of myths that claim the city was once the home of the Amazons. Even though the Amazons are no more than a myth, Samsun has embraced its heritage wholeheartedly and presents it proudly in several parts of the city. Once ruled by Greeks, Romans and the Ottomans, Samsun is surely a place where you can both get to know the history of northern Anatolia and treat yourself to some delicious food.

Amisos Hill: Dominating the city of Samsun with its location right in the middle of the city's center, Amisos Hill is the gateway opening to the history of Samsun. Dating back to the third century B.C., the hill is composed of two tumuli and a tomb. Recent studies showed that the tumulus date back to Hellenistic times. The tomb belongs to the era of the Kingdom of Pontus, featuring various treasures, including jewelry, pots and pans, a crown, a gold ring with a gem, gold buttons, gold bracelets with human and animal motives, a gold barrette, earthenware, kerosene lamps and the remains of a prince, king, commander, queen or princess of the Pontus Kingdom.

In addition to the skeletal remains of an ancient king and dioramas, the hill also has a restaurant that offers delicious food and a breathtaking view of the Black Sea. After your meal, a stroll down the hill toward the shore will lead you to gigantic sculptures of lions, Amisos warriors and ancient female fighters. Here, you can catch a boat on the small river that runs between the sculptures or has the amazing experience of eating dinner in a restaurant located at the Lion's Mouth.

Şahinkaya Canyon: Who wouldn't love a little adrenaline rush while admiring one of the best landscapes one has ever seen. Apart from its food and rich history, Samsun has also been blessed with natural beauty. One of its hidden gems is Şahinkaya Canyon in Vezirköprü, which is not only treasured locally but is well-known throughout the country. The canyon contains the perfect combination of green and blue hues. Hop on a boat, sit back and lose yourself in the native birds' melodies while you sail among the mountains' fresh crisp air and amazing landscape. The canyon also offers paragliding sessions for visitors.