Land of eternal blue: Sailing through the Bodrum coast 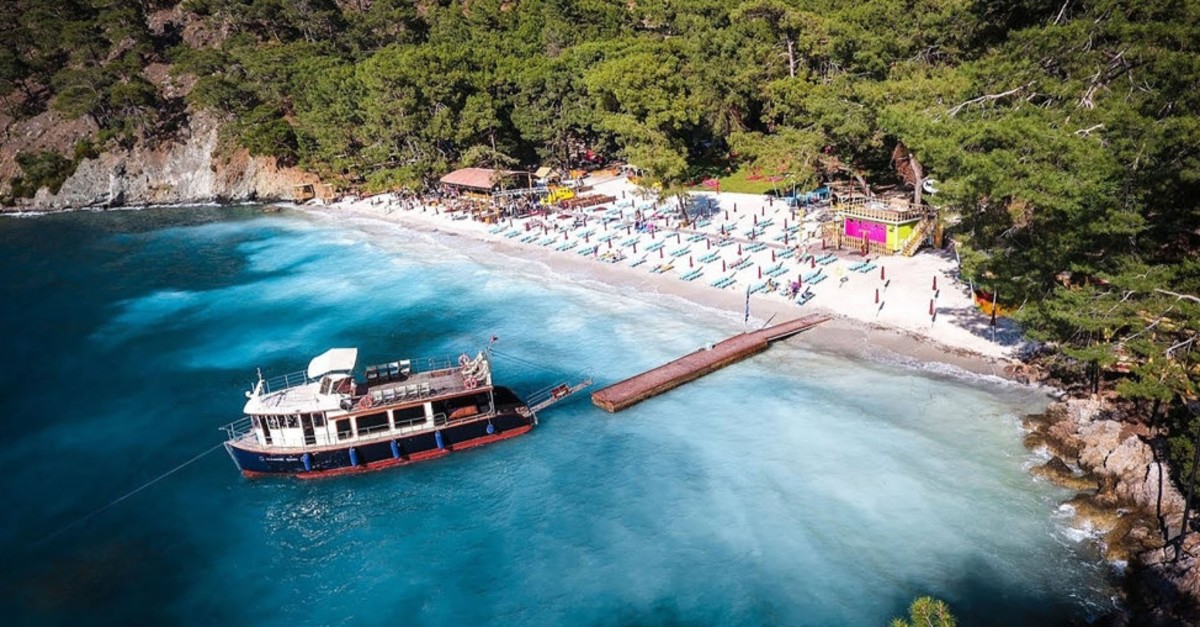 Bodrum is famous with its sandy beaches and crystal clear waters. If you love tranquility during your time by the sea, blue cruises though Bodrum coast can be one of the best choices for you.
by Miraç Tapan Aug 11, 2019 12:00 am

Blessed with the bluest seas, it is always a good idea to visit Turkey during summertime but if you really want a taste of the Aegean lifestyle, you need to set sail for the coast of Bodrum and beyond

The fatigue you have been feeling throughout the year can be washed away with a few days under the Aegean sun. This is why the world's richest man, Jeff Bezos, prefers to spend few weeks in his ridiculously huge yacht, and Russian oligarch Roman Abramovich has made a habit of stopping by one of the beautiful bays of Muğla every now and then. With its popular resort towns, such as Bodrum, Fethiye, Göcek and Marmaris, the southwestern province of Muğla is flocked with local and international tourists throughout summer.

Bodrum, without a doubt, is the jewel of Muğla and the Aegean coast of Turkey. The town provides a historic backdrop for the jaw-dropping natural beauty that engulfs the peninsula, guarded by the 15th century Bodrum Castle at the entrance. The Fisherman of Halicarnassus, the most famous resident of the town, once said, "Don't think that you will go as you came; the ones before you were the same; they all went off after leaving their minds in Bodrum," and he couldn't be more right.

It is a perfect place not only in summer but throughout the year. But in summer it has a different vibe that sort of welcomes you to its beaches to wash away the tiring chaos of everyday life. But just like any other Muğla town, Bodrum is crawling with people in summertime, and this aspect is not something that appeals to everyone. Some prefer to enjoy the crystal-clear waters of the Aegean without all the fuss. 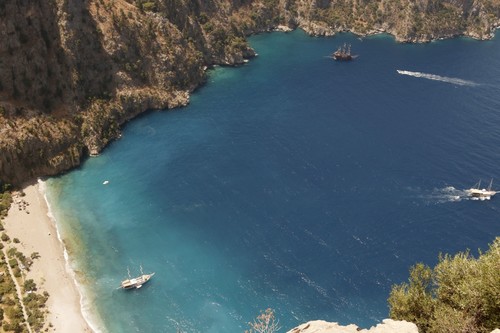 Blue cruises are the best way to discover secret beaches and bays.

I am one of those people. I really enjoy occasional trips to Bodrum, Muğla, during summer but I hate the crowds since one cannot even walk in the main streets. So, this year my family and I decided to take one of these famous blue cruises along the coasts and bays of Bodrum in our new sailboat - it is actually 33 years old, but brand new to us – and to see the hidden beaches and bays that draw even the richest man alive.

We set sail early in the morning from the Milas district of Muğla and found ourselves off the coast of Bodrum in few hours. For our first stop, we shopped for our upcoming five-day trip on the boat and to feel the ground under our feet as the next five days we will walk on nothing but water. On blue cruises, the one thing that you have to be prepared for is making do with little resources. First, if you are going away on boat for a week with no plan of anchoring somewhere before returning, you have to face the fact that you cannot use all the stored water in one day. So, say goodbye to thorough showers and be sure to ration your junk food because there will be many nights under the stars. After we fueled up our sailboat and ourselves, we raised the sails and gave ourselves over to the wind of the Aegean. As you sail through the coast, you understand why Bodrum and its bays are the number one destination of hundreds of thousands of boat lovers. When you start to get away from the crowd and civilization, the water turns into a strange turquoise color, luring you to take a dive. But fair warning: Do not give into the temptation while your boat is still sailing.

After three hours of sailing from Bodrum, we came across a bunch of small islands, where you see a lot of boats disappearing between the islands, meaning you are in the right place. Our first stop was Orak (reaping hook) Island, which is named after its shape. This island is a beloved place for boat lovers as it has everything you need: crystal clear water that you can actually see fish swimming, nice, calm water to spend the night and a quiet place to watch the stars all night.

Living in a big city, in my case Istanbul, makes you forget about the simple pleasures in life. The first is the stars popping out at night, which we cannot see because of the artificial light that turns nights into days. The second is nature's own voice, which we fail to hear because of the noise of our neighbors, cars or airplanes.

I totally fell in love with Orak Island. Why? I have no idea! It was simply an uninhabited island offering shelter to animals, but the peace it gave me cannot be described in words.

After we spent an unexpected two days on Orak, we set course for the Seven Islands. The journey was tough though. Unlike the journey to Orak, the way to the Seven Islands was shaky as we sailed further away from the mainland. Eventually, after an entire day of sailing, we arrived and I couldn't have been more surprised. The water actually looked like that in the Maldives. Suddenly we found ourselves in an unexpected haven, and we couldn't have been happier. However, we were on the lookout for something extra special: The Secret Bay.

The Secret Bay is a hidden inlet that can only be accessed by boat through a small opening between two tiny islands. There is hot water flowing deep under the water, making the bay warmer than those surrounding it. However, the Secret Bay was no secret at all. We found at least six other boats sharing the bay. Yet still, it is fun to discover places that you could never find without hopping on a boat. As we started to make our way back home, I got a glimpse of the lives of the explorers who lived many centuries ago. Seeing places that you have never seen before, discovering secret locations that you can actually call home and returning to the basis of life is a rush that only adrenaline-filled sports can give you. On a blue cruise through the coast of Bodrum, you rediscover yourself, seeing that there is a higher power in life other than deadlines and rush-hour traffic.

Rent your own blue cruise

You do not need a boat to enjoy the coast of Bodrum. There are many tour companies arranging daily boat trips to the nearby islands off the coast. If you want to enjoy the blue waters and secret bays with your friends, you can also charter your own boat and set the course as you like. If you are feeling adventurous and have a captain's license, you can also rent a boat and say "Ahoy!"