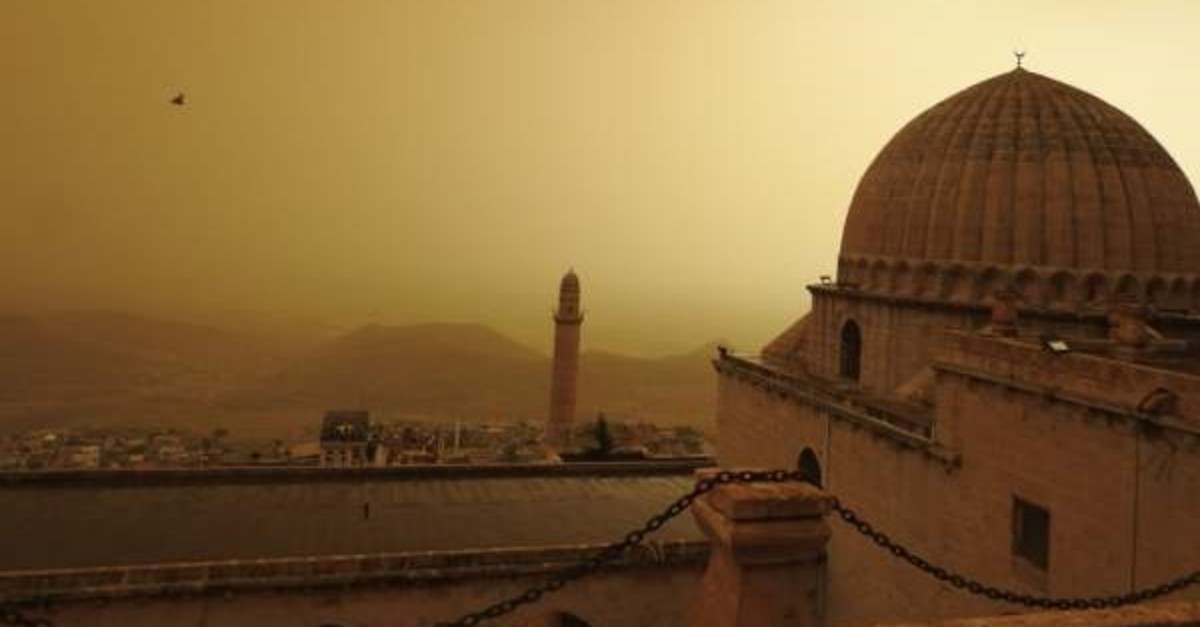 Lying in the fertile lands of southeastern Anatolia, Mardin will touch your soul with its multicultural atmosphere and structures that reflect thousands of years of human history

Mesopotamia is known as the fertile land between the Tigris and Euphrates rivers. In this land, which has been home to countless civilizations, numerous cities have been established throughout history. Founded on fertile Mesopotamian lands, Mardin has also hosted different civilizations for thousands of years. It has a multicultural, multireligious, multilingual and multiethnic background. As you walk around the city, you often pass by people speaking Turkish, songs playing in Arabic and Kurdish or perhaps two old women chatting in Assyrian. Although Operation Peace Spring, Turkey’s cross-border anti-terror operations in northern Syria targeting terrorists affiliated with Daesh and the PKK's Syrian offshoot, the People's Protection Units (YPG), was launched recently, life in the city continues as normal. And Mardin is more than ready to offer its mystical beauty to its visitors.

When you say Mardin you think of earth-tone buildings built on a hillside, right? That is the old center of town. Of course, the city has been developed and modernized with newer buildings, streets and shopping malls built over the years, but after you make the long trip from Istanbul, do not just spend your short trip here. Instead, set a course for the center of the old town, which attracts visitors from around the world.

The history of Zinciriye Madrasah dates back to 1385. Its construction began toward the end of Artuqid rule; however, due to the Timur invasion and being seized by the Aqqoyunlu, it was left unfinished. It was named after Kasım (1457-1502), the son of Cihangir, after it was completed by the Aqqoyunlu state. The madrasah is definitely one of the places to visit in this city. Due to its location at a high point, the madrasah can offer you one of the best views overlooking Mardin.

Ulu Mosque, the undisputed symbol of Mardin, stands out as one of the best architectural examples of the Artuqid Period. Mardin Ulu Mosque, the symbol of Mardin with its sliced dome and minaret, was initially built with two minarets according to the records. The original inscription on the square base of the single minaret, which has survived to this day, lists the construction date as 1176. The dome of the mosque was built with a special technique from the outside. This method was first used in this building but later became a tradition in Mardin.

There are many churches in the city as well. One of the most important of these is the church built on behalf of Mor Behnam and his sister Saro, now known as Kırklar Church. The church is thought to have been built in the middle of the sixth century.

When you walk around the city, you will see how precious copper works are. And if you are keen on copper, make sure you take a few pieces back home. The place where you can buy most copper products is Bakırcılar Bazaar or Kazancılar Bazaar, as the locals call it. Almost all of the kitchen utensils and dinnerware used in the old Mardin are made of copper. Therefore, the profession of coppersmith is widespread in the province. However, as you can imagine, the craft is not as popular as it once was, but it is being kept alive by a group of craftsmen in the city.

EXPLORE THE OUTSKIRTS OF THE CITY

Deyrulzafaran Monastery is located 5 kilometers east of Mardin. Until 1932, the building housed Syriac Orthodox patriarchs for 640 years. The three-story monastery attained its present state in the 18th century with additions made at different times, starting in the fifth century. The monastery's history dates back much earlier than that. The structure in the center of the building was used as a Temple of the Sun before Christ. Long known as the Mor Hananyo Monastery, the monastery was named Deyrulzafaran (Saffron Monastery) after the 15th century because of the saffron plant that grew around the complex.

Excavations in the ancient city of Dara have been ongoing since 1986. This ancient city, which opened to visitors in 2017, hosts one of the world's most unique necropolis sites. The ancient city is located in Oğuz Village, 30 kilometers southeast of the city center. Dara, one of the most important settlements of upper Mesopotamia in history, was established as a garrison city for military purposes.

Mardin Museum is located on the first street, in the north of Cumhuriyet Square, among a group of Assyrian houses. It is considered the most prominent museum in the city. Artifacts related to Assyrians, Persians, Urartians, Artuqids, Great Seljuks, Rome and any other civilization you learned about in elementary school are all featured in this museum. Mardin Museum, which has been in service since 1947, stands out with the diversity of the works on display.

There is another museum that you can visit in the vicinity right after Mardin Museum. The concept here is different than the former because it has tried to gather information about life in Mardin, the multicultural structure of the city and the communities that lived, and still live, there. The museum building opened in 2009 as the Sakıp Sabancı Mardin City Museum and Dilek Sabancı Art Gallery.