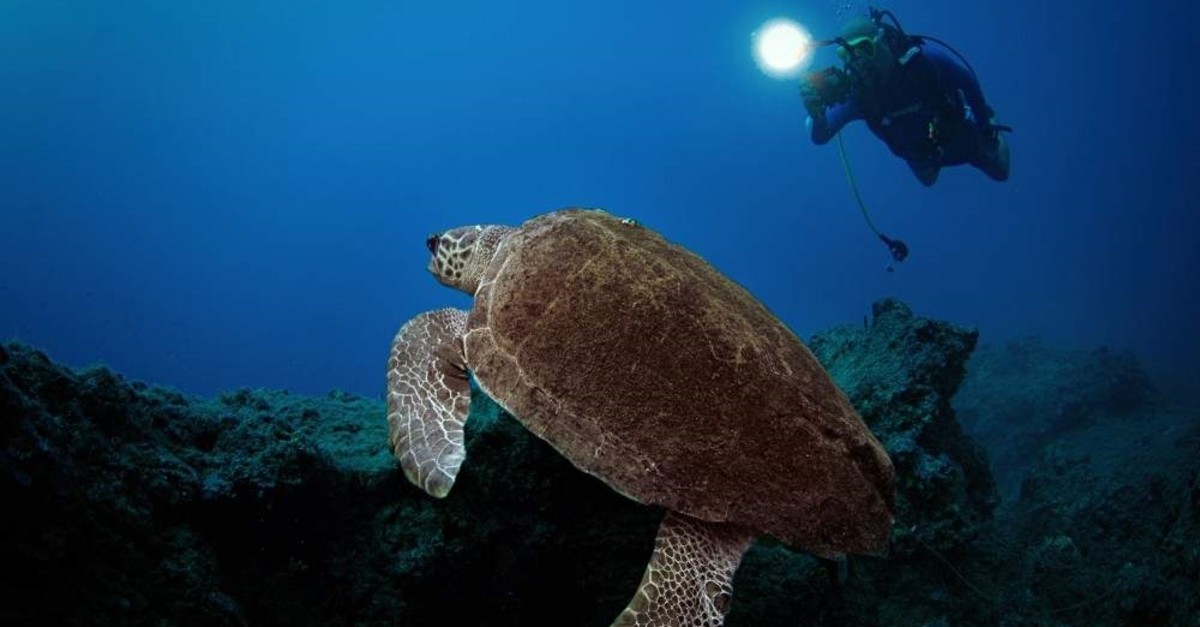 Loggerhead sea turtles are often seen at the beaches in Olympos and in the sea. (AA Photo)
by Daily Sabah with AA Nov 05, 2019 2:54 pm

Olympos, the ancient settlement once home to the Lycians, is now a paradise for backpackers and nature lovers from around the world who want to experience the simple life Mother Nature offers

Countries with a Mediterranean coast are the luckiest in the world. The endless crystal blue sea blesses these coasts with one of the world’s best climates, beautiful nature, diverse food and animal species.

Located in southern Turkey, Antalya is one of these blessed places. Throughout history, mankind has built settlements and civilizations off these coasts, making it their home.
From myths to tourism books

Antalya’s Olympos is one of those places. Once an important Lycian town, Olympos is very well known by locals but not so much by international tourists, making it one of the few hidden heavens in Turkey.

The town was once a prosperous Lycian town, though its foundation date is unknown. Olympos started minting Lycian League coins at the end of 2 B.C. and became the sixth biggest Lycian town of the time. When Christianity began to spread to Roman soils, Olympos became one of the first places to accept this new religion in Anatolia.

Having been subjected to myths and stories for thousands of years, the town of Olympos is famous lately for being the beach resort of choice for backpackers. Nicknamed “Campers’ home in the Mediterranean,” Olympos shines with its rooted history, ruins of ancient civilizations, loggerhead sea turtles, tree houses and unmatched natural beauty.

For years, Olympos has welcomed thousands of nature lovers from all over the world to discover this hidden jewel of the Mediterranean. The visitors return to nature and enjoy spending time away from the conveniences of modern life.
Life in tree houses

The beauty of Olympos lures people. Kadir Kaya, who runs a hotel made of tree houses, is one of those people. When he first moved to Antalya’s Olympos, Kaya had a hard time adapting to his new life. He wanted a lifestyle that allowed him to be one with nature. However, it was not easy. He first built a camping site for caravan riders and tent owners. Later, he rolled up his sleeves to build tree houses to accommodate tourists coming to the town. With these initiatives, Kaya became one of the leading figures of Olympos who helped the town prosper in alternative tourism.

“Olympos is one of the most important destinations for backpackers in the world,” said Kaya. “I did not want to spoil the natural beauty of this town so I began to promote life in tree houses. I worked very hard for this concept to be accepted by the local government as well as the tourists.”

Kaya has been living and working in Olympos for 35 years. After so many accomplishments in the town, Kaya aims to lure adventure seekers to the region. “I dedicate most of my time to nature sports now,” said Kaya. “We have recently opened the longest climbing route in Europe. We are close to the sea and the famous Lycian Way. Mount Muse has one of the most energetic auras. People come here to climb the mountain and enjoy the air. We also organize diving tours. Alternative water sports like canoeing are also popular. It is a fantastic experience to be here.”

Indeed, Olympos is a paradise for people who love spending time in nature. There are numerous places where you can enjoy different aspects of Mother Nature.

Köprülü Canyon is a must-see place in the town. The canyon has its own trekking route as well as a rock-climbing center. Suluada, Beşadalar and the Gelindonya Lighthouse are usually chosen for tourists who want to enjoy the endless blue of the Mediterranean. The Lycian Way, which was mapped by British expat Kate Clow, is a world-renowned route for adventurers. Convinced that Turkey needed long-distance walking routes, Clow connected a series of old roads to make Turkey's first long-distance walking path, the Lycian Way, a route for trekking which was opened in 1999.

“People who come here want to renew themselves. Nature is their meditation,” said Kaya. “This is what the world wants. Nature tourism is different than other tourism activities. Tourists do not need hotels, just a roof over their head and a smiley face.”