Tortum Waterfall is Turkey's largest waterfall and one of its most remarkable natural treasures. (Elena Odareeva / iStock Photo)
by Miraç Tapan Jan 17, 2020 12:50 pm

Known for being one of the most peaceful places in Turkey as well as a go-to spot for adrenaline junkies, Erzurum's slow city Uzundere celebrates nature, history and good living

When you visit Turkey, you will most likely want to see Istanbul or the remains of Ephesus in İzmir or drive to the Turkish Riviera in southern Anatolia to soak in the lovely Mediterranean sun while enjoying the crystal blue waters. Usually, the eastern part of the country is not the first place that comes to mind when traveling across Turkey. But if you want to see somewhere that has not been touched by the destructive hands of modern man and spend a few days in a small town where life is good and time flows slower than usual, you have to see Erzurum's Uzundere, one of the slow cities of Turkey.

Adrenalin junkies and adventure lovers discovered the beauty of Uzundere long before the Cittaslow Network, whose headquarters is located in Italy. The town was recognized by the slow city movement a few years ago, and now, it has become an international tourist attraction. Do not get alarmed though – it might be a tourist attraction, but Uzundere managed to protect the magic that makes it "heaven on earth." 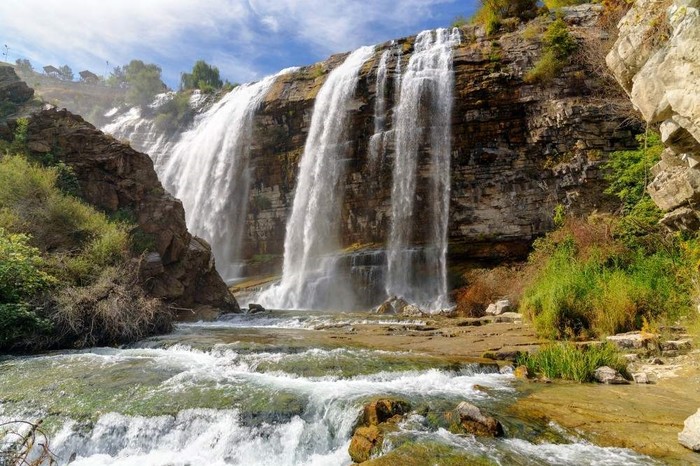 What it's all about

Located 84 kilometers northeast of Erzurum, Uzundere is home to both unmatched natural beauties and history. The town is home to Turkey's highest waterfall, the Tortum Waterfall, and a namesake natural lake. Having been formed after a landslide near the village of Balıklı in the 18th century, Tortum Waterfall is 21 meters wide and 48 meters high. With the arrival of spring, the snow that has covered the ground for about six months begins to melt in Erzurum. The flow at the waterfall peaks when the snow melts, mesmerizing visitors with a rainbow around the falls during spring and summer.

In short, if you happen to find yourself in Uzundere, you will see the eastern beauty of the highlands covered with snow nearly year-round, as well as moorlands that display not only Turkey's greenery but also its eastern mystery.

The food in Uzundere is another topic entirely. The rich and meat-based cuisine of the Eastern Anatolia reflects itself in Uzundere as well. What makes the food in Uzundere so special is that all of the ingredients are natural, organic and gathered by local producers. You can taste the delicious food of the town during your visit and take some of the organic foods home with you. Make sure you get some eggs, butter and organic fruit.

Considered one of the most peaceful places in Turkey, Uzundere has become a frequent destination for adrenaline seekers. Apart from the usual nature walks and trekking, the town offers a variety of extreme sporting opportunities. 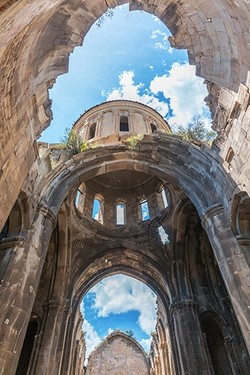 Rock climbing is one of the most popular activities in the town. Rock climbers from all over Turkey, as well as from around the globe, travel to Uzundere to have a taste of the Eastern mountains of Anatolia. If you want to go to the extremes, nature sports clubs offer ice climbing, as climbers try to climb the frozen Tortum Waterfall.

Looking for a new paragliding ground? Well, you have come to the right place. The town of Uzundere boasts 20 different sites suitable for paragliding. The municipality and the sports clubs organize paragliding events where sportspeople can also camp in the untouched nature of the region.

If you are into history, there are a few things for you in Uzundere as well. Home to many civilizations throughout its 3,000 years of history, the town is where Oshki, a 10th-century Georgian monastery, is located. Considered one of the largest and architecturally most complex buildings produced anywhere in the Eastern Christian world, the monastery is open for visits by history lovers.

The town also features a castle dating back to the 16th century. Although it is not as glamorous as most castles you can see around Anatolia, the Engüzelkapı Castle was built over a Byzantine castle and features architectural elements of the two great empires, the Ottomans and the Byzantine.

The castle was nearly destroyed but the Ministry of Culture and Tourism announced in 2016 that the historic structure would be renovated.

Although the renovation has not yet finished, you can still enjoy some history at the site.