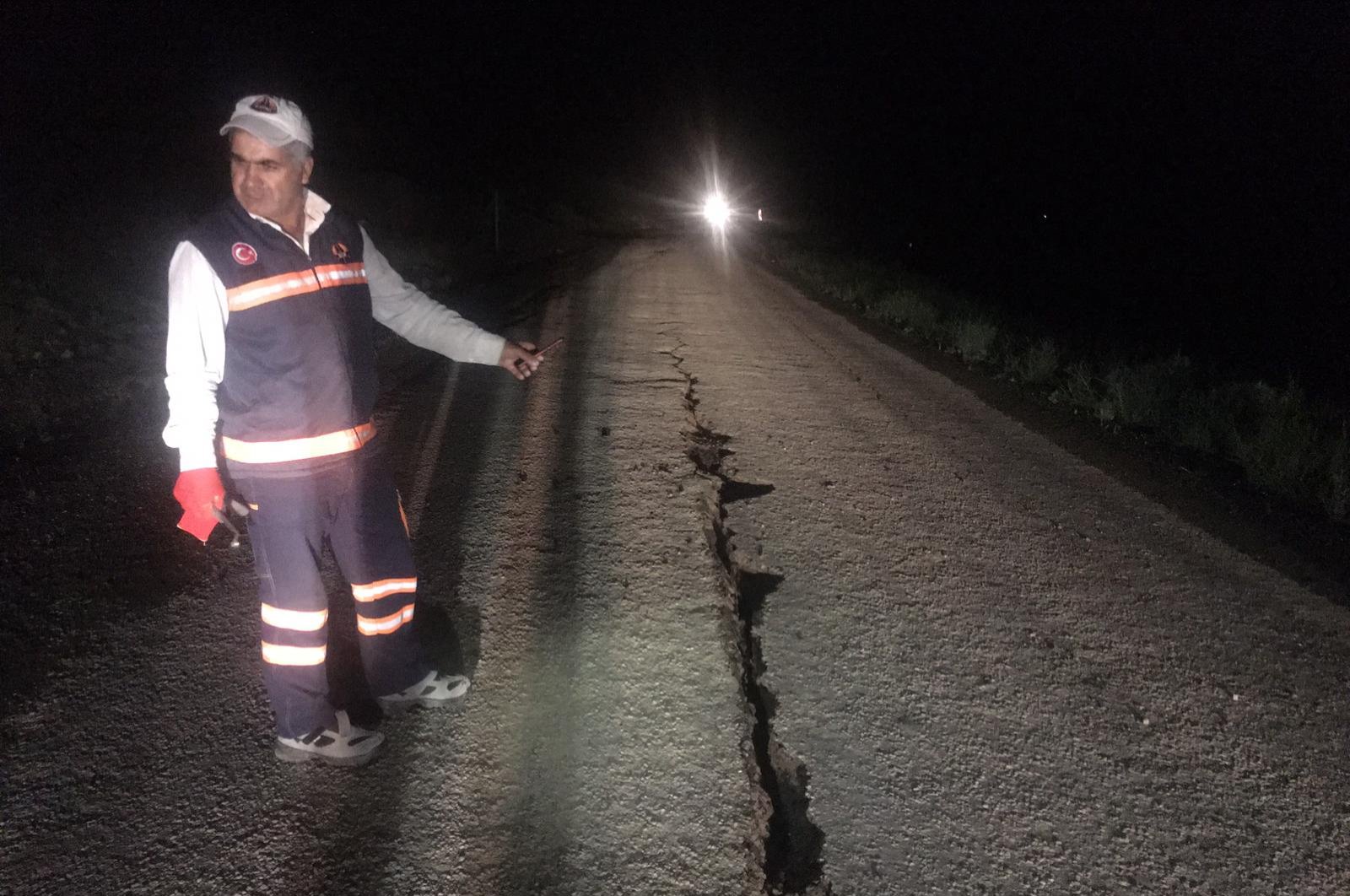 Eastern Turkey's Bingöl was rocked by a 5.7 magnitude earthquake late Sunday, killing one person. It also triggered concerns over fault lines in the region which last caused a disaster that killed 41 people in January in Elazığ

One person was killed and 18 others injured after a magnitude 5.7 earthquake shook Turkey’s eastern Bingöl province at a shallow depth of 5 kilometers, reports said Sunday.

The earthquake was initially reported as magnitude 5.9, but Kandilli Observatory revised the figure to magnitude 5.8, while Turkey's Disaster and Emergency Management Authority (AFAD) reported the quake as measuring 5.7.

A village guard was killed and two others were injured after two observation towers collapsed, according to Bingöl Governor's Office. Seven people were rescued from the wreckage.

Oktay said 18 people were injured in the temblor but said no one is in critical health condition.

More than 1,300 tents were delivered to the region, and officials are checking every village and town, he said.

"Forty-six aftershocks have happened so far, with two of them more powerful than magnitude 4. Ninety teams from the Environment and Urbanization Ministry started to assess the damage and they will continue until all the region is inspected," he said.

The earthquake also partially damaged 10 houses in the Elmalı and Dinarbey villages of Yedisu district.

The Interior Ministry said 26 vehicles and 109 health and rescue personnel were sent to the region.

Two military aircraft are on alert if any further help is needed, the statement said.

The epicenter of the earthquake was Karlıova district, according to Kandilli, and the temblor lasted around eight to 10 seconds, striking at 5:24 p.m. local time.

Another magnitude-5.6 earthquake jolted Turkey's eastern province of Bingöl on Monday, according to the nation's disaster agency.

The earthquake in Bingöl was triggered by the deadly East Anatolian fault line, stretching some 650 kilometers from eastern Turkey's highlands to the Mediterranean, from where it turns southward and meets the northern end of the Great Rift system separating African and Arabian plates. The strike-slip fault was formed millions of years ago as the Anatolian plate was being pushed northwestward by the Arabian plate.

Hasan Sözbilir, director of the Dokuz Eylül University Earthquake Research Center, said that the two eastern branches of the North Anatolian Fault (NAF) started to trigger earthquakes. He added that the 40-kilometer-long fault has the potential to create earthquakes up to a magnitude of 6.9.

“Faults were triggered. Aftershocks resumed along the Elmalıdere line, which began to break with Sunday’s 5.7 magnitude earthquakes. It is crucial not to enter houses with serious damages. There has been a dangerous degree of seismic activity in the region located between Erzincan and Karlıova,” Sözbilir said.

Turkey is among the world's most seismically active countries as it is situated on several active fault lines, with dozens of minor earthquakes and aftershocks occurring daily.

Numerous tremors have occurred on the NAF fault line in recent history. One such earthquake hit Erzincan province in 1939, which was recorded as the strongest and deadliest of Turkey's Republican period. About 33,000 people died and more than 100,000 were wounded in the earthquake, which completely destroyed the city and about 116,000 buildings.

Many more earthquakes have hit the region since, including in Erzurum, Muş, Van and Diyarbakır. The 1999 earthquake in northwestern Düzce province also occurred on the same active NAF line, causing around 17,000 deaths, greatly affecting Istanbul too.

Numerous major earthquakes of significant intensity have occurred in the region. In 2010, eastern Elazığ province was hit by a magnitude 6 earthquake, killing 51 people in the villages of the Karakoçan district. Some 350 kilometers to the east in 2011, an earthquake struck the eastern city of Van and the town of Erciş, some 100 kilometers to the north, killing at least 523 people. More recently, at least 41 people were killed and 1,607 others were injured when a 6.8 magnitude earthquake rocked Elazığ in January.

The Earthquake Research Center, based in Erzurum's Atatürk University, recently announced its preliminary seismology report on the Karlıova earthquake. Accordingly, the aftershocks of the earthquake could last for at least two more weeks. The report also stated that more than 50 aftershocks occurred after the earthquake.

The center also examined the extent of last year’s earthquakes, finding that most were clustered in the main tectonic zones and its surroundings. Also, it was detected that 10 small-scale earthquakes occurred over the course of one month in the pre-earthquake period.

AFAD said that 6 out of 21 citizens who submitted to hospitals were discharged. Treatment for the other 15 continues.

The agency added that the number of vehicles deployed to the earthquake area has reached 101, while the number of personnel has been increased to 828. Furthermore, seven mobile base stations are currently active in the region.

AFAD declared in a statement said that citizens affected by the earthquake would be provided with psychological and sociological support. Sixteen social service workers, psychologists and sociologists are working in the region, it claimed.