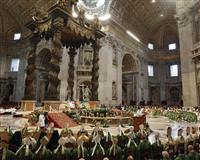 Turkish extremists were responsible for the murder of a Catholic bishop in Turkey, his successor Monsignore Ruggero Franceschini has said, according to Italian media reports Saturday.

- The Vicar Apostolic for the Anatolia region of Turkey on Friday told a synod of bishops meeting at the Vatican to discuss the Middle East that "ultra nationalists and religious fanatics" had planned and carried out the murder of Luigi Padovese in June. "It was quite clearly a murder committed by the same dark powers who only months before poor Luigi's death were responsible for the murder of the priest Andrea Santoto, the Armenian journalist Dink Hrant Dink and three Protestant missionaries in (the city of) Malatya," Franceschini continued.

Padovese, 63, was stabbed on June his home in the southern Turkish city of and later died of his injuries.

His 26-year-old driver Murat Altun was first charged with the murder. According to investigators, Altun said the murder was "divinely inspired."

Authorities said at the time they did not believe the murder was politically motivated and that the driver had been suffering from depression. Turkish media later spread rumours of a homosexual relationship between the two men. Nationalists extremists have attacked or kidnapped Christian priests on numerous occasions over the past few years. In early 16-year-old boy shot an Italian priest from behind as he was praying in the Black Sea town of .

In April 2007 one German and two Turkish Christians were tortured and murdered in the south-eastern city of .
Copyright DPA
Last Update: Oct 18, 2010 4:02 am
RELATED TOPICS