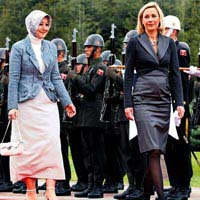 Turkey's headscarved first lady, Hayrünnisa Gül, walked past the guard of honor along the red carpet during a welcoming ceremony at the Çankaya presidential palace for the first time yesterday after President Abdullah Gül decided to re-adopt normal procedures regarding welcoming ceremonies.

Contrary to normal procedure, Mrs. Gül did not previously walk on the red carpet along with her husband because high-ranking military officers, known to be against the headscarf, avoid contact with her. However, in a move that came following the positive atmosphere that emerged after the easing of the headscarf ban at universities, the president decided to put an end to that unusual procedure. The first lady appeared on the red carpet yesterday as she, together with her husband, welcomed German President Christian Wulff, who is on a visit to Turkey with his wife, Bettina Wulff.

President Gül also recently decided to receive top generals at a Republic Day reception he will host on Oct. 29 together with his wife, whose headscarf has been an issue for the military ever since Gül was nominated for the presidency three years ago. President Gül will end his three-year-long tradition of holding two receptions -- one in the day together with his wife where representatives of NGOs, media organizations and artists are invited, and another in the evening where he receives politicians and army commanders alone -- and organize only one reception for those invited, including top generals, while accompanied by the first lady.

In a move to normalize civilian-military relations in Turkey, the newly formed top military brass have indicated their intention to be present at the event.

However, the main opposition Republican People's Party (CHP) is not in favor of attending the reception since, according to the party, the first lady cannot wear the headscarf because the official reception is being held on state premises, where wearing the scarf is prohibited.

In response to recent claims that the president aims to "violate the headscarf ban on state premises," the Office of the President on Monday released two archive photos in which two former presidents, Süleyman Demirel and Ahmet Necdet Sezer, shook hands with headscarved women in separate receptions held at the presidential palace. The photos imply that the enforcement of the headscarf ban is out of the question at the palace and that there is no legal obstacle before the first lady to attend the reception.
-CIHAN-
Last Update: Oct 20, 2010 1:31 pm
RELATED TOPICS