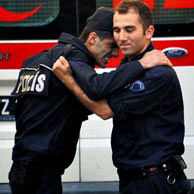 Kurdish PKK separatists are emerging as the most likely suspects for a bombing in Istanbul that wounded 32 people, Turkish officials said on Monday, all but ruling out an attack by al Qaeda Islamist militants.

ISTANBUL, Nov 1 (Reuters) - The bomber wounded 32 people in an attack on Sunday morning that targeted police in Istanbul's main square, a busy transport hub usually packed with tourists and shoppers. Most of the seriously injured were police.

No organisation has claimed responsibility, officials said, though the city has been targeted in the past by Kurdish separatists, al Qaeda and militants from Turkey's far-left.

The bombing took place on the day that a month-old ceasefire by the militant Kurdistan Workers Party (PKK) expired.

"The techniques used in the attack and the progress made in the investigation so far shows a 90 percent probability that the PKK is responsible for the attack," a high-ranking security officer in western Turkey told Reuters.

The officer said investigators believed there was a small chance the attack was the work of leftists, but "al Qaeda and other organisations are out of the picture". The PKK did not immediately accept or deny responsibility. Ahmet Deniz, a senior official in the PKK leadership based in northern Iraq, declined to comment on reports linking the guerrilla group to the bombing.

The PKK "will make a comprehensive statement this afternoon on both the ongoing process, because the ceasefire ended yesterday, and on the current issue (of the bomb)," he told Reuters when reached by telephone.

The blast also coincided with arrests of 16 members of a leftist militant group, the Revolutionary People's Liberation Party/Front (DHKP/C), that was involved in a suicide attack near Taksim Square that killed two people in 2001.

Al Qaeda suicide bombers carried out a series of attacks in Istanbul in November 2003 that killed 62 people and wounded hundreds. Several Islamist militants were arrested last month. But officials have played down the likelihood of Islamist role.

"Police are focusing on the PKK and the DHKP-C," said Samil Tayyar, a columnist in the Star newspaper, seen as close to the government.

President Abdullah Gul, expressing national outrage on the attack close to the Republic Monument commemorating Turkey's founder Kemal Ataturk, said: "Today is the day for the strongest protests against terror."