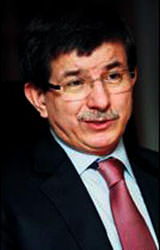 ANKARA, Turkey (AFP) - "We hope to sign the accord and hold the first meeting of the council when our prime minister [Recep Tayyip Erdogan] visits Egypt in the coming months," Ahmet Davutoglu said after talks with his Egyptian counterpart Ahmed Abul Gheit.

The council will group the two countries' prime ministers and a number of senior ministers.

Keen to boost its regional profile, Turkey has signed similar agreements with Greece, Syria and Iraq and describes the council gatherings as "joint cabinet meetings."

Gheit hailed the agreement as "a very constructive step" and voiced hope it would "take bilateral relations to a higher level."

The two ministers said they also discussed international efforts to revive peace talks between Israel and the Palestinians, Iran's nuclear program as well as developments in Lebanon and Iraq.

Gheit was to wrap up his two-day visit later Monday after meetings with Erdogan and President Abdullah Gul.
Last Update: Nov 24, 2010 9:59 am
RELATED TOPICS