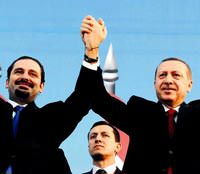 Turkish Prime Minister Recep Tayyip Erdogan, at the start of a two-day visit to Lebanon Wednesday, said Turkey his would support Lebanon to ensure its stability and unity.

Beirut (DPA) - 'Lebanon is one of the most diverse countries in the region. We will stand by Lebanon's side and I know that my Turkish brothers will help achieve peace in Lebanon through dialogue,' Erdogan told a rally in northern Lebanon.

'The Israeli government should realize that when security and peace prevail in the region, then it would gain from this peace. Should a war erupt, then the people of the region and the residents of Israel would be the losers,' he added.

'Your visit reflects your continuous care for this region's issues and your special perspective regarding its people's concerns,' Hariri said.

Erdogan's visit comes as Turkey endeavors to play a bigger role as regional mediator in the Middle East.

'We are working towards peace and justice and the implementation of international law,' Erdogan said in reference to the United Nations tribunal probing the 2005 assassination of Hariri's father, former premier Rafik Hariri.

Accompanied by Hariri, Erdogan toured areas in the northern Akkar region and inaugurated Turkish-built schools and a rehabilitation centre.

In remarks published Wednesday in the Lebanese daily As Safir, Erdogan said his country would not allow Lebanon to deteriorate into a civil war.

Turkey would 'do the necessary to fight signs of a civil war in Lebanon,' he added.

'Now is the time for unity in Lebanon,' Erdogan said.

His visit comes ahead of the release of the findings of the Hariri Tribunal - which is widely expected to indictment of members of Hezbollah- the cause of mounting domestic political tension.

The militant group has said it will not accept any accusation against any of its members, and warned of the repercussions of such an outcome.

During his stay in the country, Erodgan is also due to visit Turkish troops deployed with the United Nations forces stationed in Lebanon and will sign a partnership agreement to establish a free- trade zone.