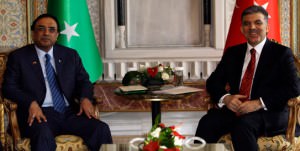 The leaders of Afghanistan and Pakistan will meet in Turkey this month for talks aimed at bringing the troubled neighbours closer, Turkish officials said Friday.

It will be the fifth such meeting since 2007 when Turkey, Nato's sole Muslim-majority member, launched the initiative to push Afghanistan and Pakistan to enhance cooperation against insurgents and improve ties poisoned by the insecurity plaguing their rugged border.

Military and intelligence officials from the two countries have also attended previous meetings.

The talks will follow a December 23 summit of the Economic Cooperation Organisation, a regional grouping aimed at boosting trade links, which includes the three countries as well as Azerbaijan, Iran, Kazakhstan, Kyrgyzstan, Tajikistan, Turkmenistan and Uzbekistan, Unal said.

The list of participants has not been finalised yet, he said when asked whether Iranian President Mahmoud Ahmadinejad would attend the gathering.