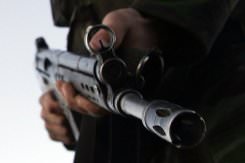 The clash happened near the village of Caliskan in Batman province when a group of rebels responded with shots when an army patrol called on them to surrender.

Turkey's prime minister indicated last month that military operations against Kurdish separatists would be scaled down after the PKK extended a truce until next summer.

The PKK said it was extending its truce declared on August 13 until general elections, expected in June, to push for a peaceful solution of the 26-year conflict in southeast Turkey.

Prime Minister Recep Tayyip however stressed the army and the police would act if they obtained intelligence about PKK activities threatening public order and security.

Boosted by its victory in a September 12 referendum on constitutional reform, Erdogan's government has launched a cautious, low-profile bid for a dialogue with the Kurds, seeking to cajole the PKK into permanently laying down arms and ending the conflict peacefully.

The PKK took up arms for self-rule in the Kurdish-majority southeast in 1984, sparking a conflict that has claimed about 45,000 lives.