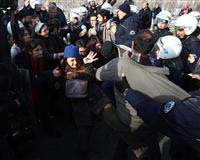 A television says a small group of leftist Turkish students protesting against the prime minister has clashed with police at an Ankara university.

HaberTurk television says police used tear gas and then rounded up the stone-throwing protesters at the Middle East Technical University, where Prime Minister Recep Tayyip Erdogan is attending a science and technology meeting on Wednesday.

It is the latest in a series of protests against the government's alleged interference with the appointment of university deans and over alleged use of excessive force by police during student protests.

Erdogan has recently criticized students of another Ankara university for throwing eggs at a member of his Islamic-rooted party.