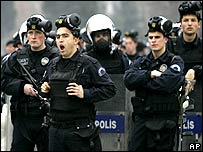 Three people were injured, one of them seriously, when a small bomb exploded Sunday during a demonstration in Turkey's mainly Kurdish southeast, police said.

The improvised device, designed to make loud noise rather than kill, was carried by one of the some 500 protestors who demonstratd outside the police headquarters in Silvan town, near the largest regional city Diyarbakir.

It was not immediately clear whether the bomb exploded accidentaly or was detonated on purpose. The blast occurred as police clashed with the protestors, using truncheons and tear gas to disperse them on the grounds that the demonstration was not authorised.

The rally was organised by supporters of the Peace and Democracy Party, Turkey's main Kurdish party, to mark the 10th anniversary of a deadly operation in Turkey's unruly prisons to move inmates to new high-security jails.

At a similar protest in Diyarbakir, a demonstrator suffered a head injury as the crowd hurled stones at the police, who responded with water cannon and tear gas, local officials said.