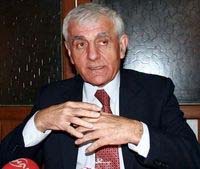 Turkey summoned the Israeli envoy to convey its unease over a deal between the Jewish state and Cyprus over economic rights in the Mediterranean, officials and media reports said on Sunday.

AFP - A senior diplomat told AFP that Ambassador Gaby Levy was summoned to the foreign ministry on Thursday, a day before the agreement was signed, but would not give other details.

The issue comes atop an already deep crisis in Turkish-Israeli ties since nine Turks were killed when Israeli forces raided an activist ship carrying aid to the blockaded Gaza Strip on May 31.

According to Anatolia news agency, foreign ministry undersecretary Feridun Sinirlioglu warned Levy the agreement would have an adverse impact on efforts to end the 36-year division of Cyprus between its Greek and Turkish communities.

He argued that "such unilateral moves (on behalf of the Greek Cypriots) that ignore the will of the Turkish Cypriot side will harm ongoing settlement talks on the island," the report said.

Turkey refuses to acknowledge the internationally recognised Greek Cypriot government in the south of the island, which signed the agreement, and has no ties with it.

It is the only country to recognise the self-declared Turkish Cypriot statelet in the north.

The deal, signed in Nicosia on Friday, defines the sea border between Cyprus and Israel and delineates an exclusive economic zone between the two countries, allowing them to forge ahead in the search for energy sources in the eastern Mediterranean.

It is seen as another step in Cyprus' search for undersea oil and gas deposits, following similar agreements with Egypt and Lebanon.

Turkey has urged Egypt and Lebanon to put the deals on hold, stressing the rights of the Turkish Cypriots and its own "legitimate and legal rights and interests" in the region.

The leaders of the two Cypriot sides have been engaged in UN-sponsored talks since September 2008, with little tangible progress so far.

Cyprus has been divided since 1974 when Turkey occupied its northern third in response to an Athens-engineered Greek Cypriot coup in Nicosia aimed at uniting the island with Greece.