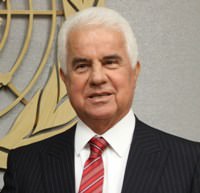 Eroglu, 73, was admitted to a private hospital in the Turkish capital on Sunday after heart tests showed a partially blocked artery. "It was a successful operation. He is now awake and feeling fine," a source close to Eroglu said. A statement issued from his office said the blocked artery was replaced. It was not immediately clear when he would be leaving hospital.
This was the first obstacle to the peace talks since Eroglu, a doctor by training, won the elections in the breakaway northern part of Cyprus last April.
Talks planned for Tuesday were cancelled and rescheduled, though senior advisors to the two sides will still meet, a United Nations spokesman in Cyprus said.
The United Nations recently warned talks could fail unless a deal is reached by next June. Eroglu and Greek Cypriot president Demetris Christofias are slated to meet U.N. Secretary-General Ban Ki-moon in Geneva on January 26 to review progress.