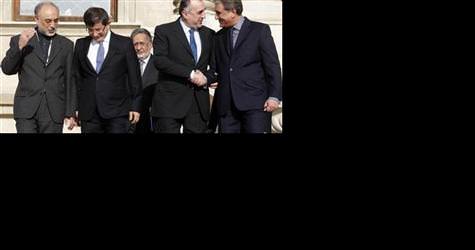 Iran's new Foreign Minister Ali Akbar Salehi made his first international appearance Wednesday as he joined counterparts at a regional gathering in Istanbul.

Salehi, also Iran's nuclear chief, made brief welcoming remarks for the participants of the gathering as Iran handed over the rotating presidency of the Economic Cooperation Organization (ECO) to Turkey.

Meeting at an Ottoman palace at the bank of the Bosphorus, foreign ministers and senior officials from the 10 member states were to prepare the ground for Thursday's summit of their leaders, to be attended also by Iranian President Mahmoud Ahmadinejad.

Salehi was appointed foreign minister last week after Ahmedinejad sacked Manouchehr Mottaki due to an apparent falling out over nuclear policy.

The visit of the Iranian pair comes ahead of a second round of talks between Iran and the 5+1 group of world powers over Tehran's nuclear program, to be held in Istanbul next month.

Efforts to end the row will be "naturally" on the agenda of bilateral talks between Turkish and Iranian officials on the sidelines of the ECO summit, a Turkish diplomat said.

Turkey's Islamist-rooted government has established close ties with Tehran, insisting on a diplomatic solution to the nuclear row and reluctant to back a tougher line against the Islamic republic, its eastern neighbor.

In May, together with Brazil, it hammered out a nuclear fuel swap deal with Iran but the United States dismissed the accord.

The following month, Turkey refused to back fresh sanctions against Tehran, adopted at the U.N. Security Council, insisting that the swap deal should be given a chance.

Its "no" vote irked the United States and raised concern that NATO's sole Muslim-majority members is sliding away from the West.

Opposition leaders Mir Hossein Mousavi and Mehdi Karroubi acknowledged the necessity of cutting subsidies, but criticised its timing and the ability of President Mahmoud Ahmadinejad's government to implement the sensitive plan.

"The country is faced with severe international sanctions, the economy is stagnating, unemployment of higher than 30 percent has spread across the country, and inflation is running wild," the website Sahamnews quoted the two leaders as saying during their meeting on Tuesday.

"Implementing the plan at this time is a burden whose pressure will be felt by the middle and lower classes" of society, it reported the pair as adding.

On Sunday, Ahmadinejad's government levied up to a five-fold hike in fuel prices as it started implementing its long-awaited economic overhaul.

The move has been welcomed by a large section of the parliament which had initially resisted it on grounds it would lead to further inflation.

Iranian "factories, which are failing to pay the average salary to workers, face closure every day," the website said, quoting the two opposition figures.

"The lack of security for investments and healthy competition... promises a dark future for the country's economy," it reported them as adding.

The two agreed that the plan in itself was a "fundamental project," but only if implemented "wisely and without any hype."

But "the situation is becoming worse as the government has no time to hear the opinion of experts on this issue."

The government plans to phase out over a five-year period subsidies on energy and food items which cost state coffers about 100 billion dollars a year, according to official estimates.