Ahmadinejad in Turkey for regional summit 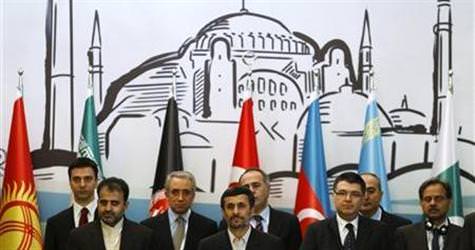 Iran's President Mahmoud Ahmadinejad joined regional leaders for an economic summit in Turkey on Thursday a month before nuclear talks with six major powers in Istanbul.

With United Nations, U.S. and EU sanctions over its nuclear programme biting harder than many expected, Iran may be looking to its increasingly economically powerful and diplomatically assertive neighbour Turkey to help relieve the pressure.

Summit host Turkey is a rare example of a politically stable democracy with a still fast-growing economy in a region plagued by conflict but blessed with vast oil and gas reserves.

The big powers want Iran to halt its uranium enrichment programme, which they suspect is a cover for an effort to build a nuclear arsenal. Iran says it has the right to enrich uranium for civilian use and does not want atomic weapons.

Iran may ask Turkey to take on the role of mediator in the talks in Istanbul next month with Britain, China, France, Germany, Russia and the United States, analysts said.

"We will do everything we can," Ahmet Davutoglu told reporters. "But our role is clear. We are hosts. If the sides want it, of course we are ready to provide every kind of help."

Ahmadinejad, who was warmly greeted by Turkey's President Abdullah Gul, is due to give a news conference later on Thursday which might be the highlight of the summit.

Turkey, a rising Muslim democracy that has applied to join the European Union, has cultivated its eastern neighbours to consolidate its position as a link between Europe and the Middle East and Central Asia.

Turkey will use it to showcase its growing diplomatic assertiveness and project a foreign policy it defines as having "zero problems with neighbours."

Tension is high between Islamabad and Tehran after a mosque bombing in Iran, but Ahmadinejad will be joined at the ECO summit by Pakistani President Asif Ali Zardari.

President Hamid Karzai of Afghanistan, which is fighting al Qaeda and Taliban militants, is also attending.

"Turkey is providing a model for these countries in the region, many of which are going nowhere in terms of social peace and economic prosperity," said Semih Idiz, a Turkish foreign policy analyst. "Turkey provides an alternative of political stability, economic growth and regional peace."

In the past decade, Turkey has transformed itself from a financial basket case on the periphery of Europe into one of the world's best-performing economies which now stakes a claim to a regional leadership role.


Gul said regional leaders should work closer to turn ECO into an important corridor for energy, communications and transportation between the East and the West.

"Our region which has been the centre of trade for thousands of years among three continents has to return to its glorious days again," he said during his speech in an Ottoman palace on the European shore of the Bosphorus, overlooking the Asian side.

U.S. and Western allies have praised Turkey's role in exporting democracy and economic prosperity in the region, but some allies are concerned the Muslim NATO member might be undermining international efforts to isolate Iran.