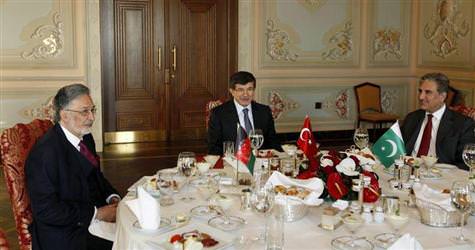 The leaders of Afghanistan and Pakistan were to meet here under Turkish auspices Friday for talks aimed at bringing the troubled neighbours closer.

Turkish President Abdullah Gul was to host the meeting between his counterparts, Hamid Karzai of Afghanistan and Asif Ali Zardari of Pakistan, at an Ottoman palace on the banks of the Bosphorus.

It will be the fifth such meeting since 2007 when Turkey, NATO's sole Muslim-majority member, launched the initiative to push Afghanistan and Pakistan to enhance cooperation against Islamist insurgents and improve ties poisoned by the insecurity plaguing their rugged border.

The leaders were to review the results of a recent meeting between the intelligence chiefs of the three countries, Turkish officials said ahead of the talks.

They were also expected to agree initiatives aimed at boosting contacts between their security forces and cooperation against drug-trafficking, they said.

The three countries' interior and foreign ministers as well as their trade chambers were scheduled to hold separate rounds of talks.

Relations between Afghanistan and Pakistan have been plagued by mutual suspicion, although bilateral ties have recently improved.

Taliban insurgents fighting against the Western-backed government in Kabul have rear bases in Pakistan, where Afghan and US officials say their leaders enjoy at least some measure of protection from Pakistan.

Islamabad flatly denies any collusion and says more than 2,420 of its soldiers have been killed fighting Islamist militants since 2002.