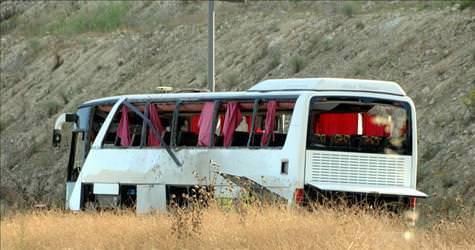 Turkish police have arrested an alleged Kurdish militant on suspicion he was among the masterminds of two recent bomb attacks in Istanbul, officials said Friday. The suspect, linked to separatist Kurdish rebels taking refuge in neighbouring Iraq, was arrested Tuesday in a village near Diyarbakir, the largest city of the mainly Kurdish southeast, the Diyarbakir governor's office said in a statement.

The security forces believe the man took part in the planning of attacks and coordinated the making of bombs and their transportation from the southeast to western Turkey, it said.
The list of incidents he was allegedly involved in included the June 22 bombing of a military bus in an Istanbul suburb, which killed five soldiers and a teenage girl, and the October 31 suicide attack on a police patrol in downtown Istanbul, which left some 20 people wounded.
Both blasts were claimed by the Kurdistan Freedom Falcons (TAK), a shadowy group which the Turkish authorities say is a front of the separatist Kurdistan Workers' Party (PKK) for urban attacks that harm civilians.
The PKK, listed as a terrorist group by Ankara and much of the international community, has waged a 26-year armed campaign for Kurdish self-rule in southeast Turkey in a conflict that has claimed some 45,000 lives.
DIYARBAKIR, Turkey - (AFP)
Last Update: Dec 24, 2010 2:43 pm
RELATED TOPICS