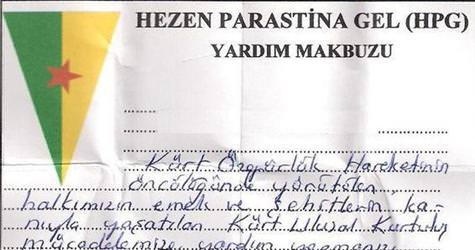 Documents have been uncovered which reveal how the terrorist organization has been collecting funds from businessmen in the Southeast. Security forces have seized 250 receipt-like forms containing notable threats which reveal that in Şırnak alone two million liras were collected for the organization.

During an operation conducted by gendarmerie teams in Şırnak directed at the KCK, the Kurdistan Communities Union, documents were found resembling receipts containing the letterhead of the HPG (PKK's armed forces) written out to wealthy businessmen. In addition the receipts, written on letterhead and containing seals also included a written threat as well as a specific amount of funds requested.
"WE ARE FOLLOWING YOU CLOSELY"
One the documents recovered it states, "We are closely tracking your personal situation," followed by the threat, "If you do not want to face a negative situation, then following through with this note in the way necessary would be to your benefit.
TWO MILLION LIRAS WERE COLLECTED
Records show that certain businessmen were responsible for aiding the terrorist organization out of fear. Gendarmerie teams have uncovered that in Şırnak, 250 receipts were distributed in the aforementioned manner resulting in the collection of two million liras.
FLAGGED LETTERHEAD
The findings point to the KCK, Kurdistan Communities Union, which operates under the umbrella of the PKK, being responsible for forcing citizens to provide funds. In the operation held by the Şırnak District Gendarmerie command in both the Batman and Mardin provinces, hidden receipts used to collect money for the PKK were confiscated by security forces. The documents all contained letterhead with the so-called HPG's flag, a seal from the organization's camps' Weekly Field Command and the date received. The receipt provides a contact number where those subjected to receiving the form can call to speak to the terrorist on duty in the intelligence department in order to pay the requested amount. Notably, the receipts not only contained the specific names of the businessmen they were addressed to, but also had the amount of payment requested designated on the document.
Also of note, were the threats handwritten on the paperwork, directed at the recipient. On one of the receipts it was written, "We are very well-informed of your personal situation and are closely following you. If you do not want to be faced with a negative situation then it is to your benefit to handle the note as dictated."