Kurdish can be used for labels maybe, but not for a water bill… 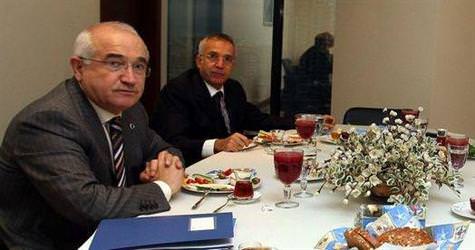 In a special interview with SABAH, Deputy Prime Minister Çiçek stated, "In terms of the language debate, if in the name of peace we irresponsibly say that it can go where it goes, whatever happens, happens it will harm this nation. Language is a means for understanding, not segregation.

Deputy Prime Minister Cemil Çiçek, relayed his views to SABAH on the hot topic of discussion regarding two languages and autonomy. Reminding that this nation's officially language was named Turkish in 1876 while also mentioning that the language has also been deemed the nation's exclusive language in European Court of Human Rights (ECHR) rulings, Çiçek states; "These demands are being made as if a state is being founded for the first time."
Deputy Prime Minister Çiçek went on to relay the following messages:

STAMPING ON THE PUBLIC'S NERVE ENDINGS: A number of sensitive subjects were requested to be brought to the agenda taking into consideration the upcoming elections and stemming from the terrorist organization's political extensions. This is how the dual language debate surfaced. Other topics may also be brought up in the days to come. Using this framework to bring to debate ethnic principles and arousing tension provides political results. Therefore, issues of contention are surfacing and the public's nerve endings are being stamped upon.
THE STATE ISN'T BEING FOUNDED FOR THE FIRST TIME: Turkey is able to debate on every issue, however there are certain matters that must be approached cautiously. Language is one of these. It's as if the Turkish Republic has not yet been founded and as if there wasn't this society prior to its founding. The way the requests are being made is as if the state is being founded for the first time. The Constitution was first founded in 1876. Let's take a look at the period of time that has passed since 1876 and 2010. Turkish has always been the state's official language and being able to speak Turkish has always been a requirement of state employment.
THE TURKISH REPUBLIC IS NOT A COMPANY: Some people are approaching the issue with a company mentality. The Turkish Republic state is not a company. Some shares do not belong to so and so and the others to others. The approach of, 'We are partners, whatever so and so partner has I want to have as well,' does not exist in state philosophy.
LIMITATIONS OF LIBERATION: Turkey is unable to establish a balance when it comes to certain issues, such as the balance needed between independence – security, state – individuals, liberation – responsibilities. Liberation also has its limitations. These limitations are dictated in the European Human Rights Agreement and in our Constitution. In the language debate, if in the name of peace we irresponsibly say that it can go where it goes, whatever happens, happens it ill harm this nation. Language is a means for understanding, not segregation.
A WATER BILL CAN'T BE IN KURDISH: For us, we debate issues with a momentary approach. It's figured nothing ventured, nothing gained. In this situation, a municipality cannot print out a water bill in Kurdish, however maybe labels in an open market could be written in Kurdish.