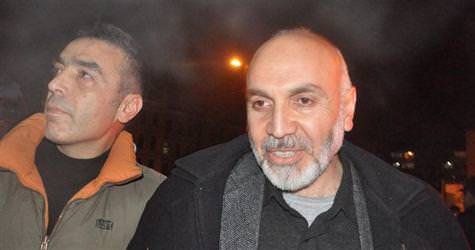 Dozens of supporters of Kurdish militants have taken to the streets in celebration as Turkish Hezbollah members were released from custody in compliance with the introduction of a law restricting the amount of time suspects can be held while awaiting the final verdict in their cases.

According to the new law, which came into effect Jan. 1, suspects can no longer be held for longer than 10 years.

Among the eight prisoners released on Tuesday was Haci Inan, the alleged leader of the armed wing of Turkish Hezbollah, also known as Kurdish Hezbollah. Another senior member of the group, Edip Gumus, was welcomed by dozens of jubilant supporters on his release with nine other men on Monday.

The law has drawn criticism from lawyers and legal experts who said it could be used to keep suspects in jail as long as 10 years, instead of speeding up the wheels of Turkey's agonizingly slow justice system.

While some cheered, others were disappointed to watch the televised celebrations by the freed militants, who for years allegedly terrorized Kurds in southeastern Turkey, allegedly executing their enemies with a single shot to the head or a swing of a long blade called the "sword of Islam." A police crackdown on the group followed the discovery of bodies in several dungeons and torture cells across the country in 2000.

Authorities have released 18 members of the group, which takes its name from the Lebanon-based Hezbollah but shares no formal links. They were convicted in 2009 on charges of killing 188 people and attempting to set up an Islamic state in the country's Kurdish-dominated southeast.

All have been freed pending the outcome of an appeals court verdict.

Yasar Alturk, a lawyer for their alleged victims, criticized their release.

"I think this law does not comply with the spirit of justice," Alturk told private NTV television. "Their release has unleashed fear."

Authorities have ordered released prisoners to report to police weekly and banned them from traveling abroad.

Alturk said that the travel ban may not be an efficient measure. Turkey has long, porous borders with Syria, Iran and Iraq.

Riza Turmen, a former Turkish member of the European Court of Human Rights, told NTV that the 10-year limit still violates the principle not to restrict the freedom of peoples.

"The law should have stated for example that suspects cannot be jailed longer than three years," Turmen said.

An estimated 60,000 inmates could possibly petition authorities for their release from overcrowded prisons, added NTV.