"In fact, we are self-sufficient" 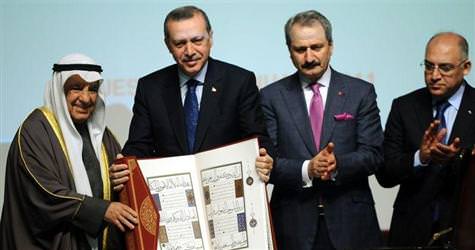 Prime Minister Erdoğan made a number of assessments during conversation with press members on their way from Kuwait to Qatar. “The Islamic world’s weight in the global economy is at 30 percent. What 57 Islamic nations produce and are going to produce will be self-sufficient.”

'WE NEED TO DISPLAY COURAGE'
"We need to have the courage to take collective steps. We are actually enough for ourselves.
As Turkey, we have a lot we could relay in the area of contracting. They also have a lot that they could relay to us. For example; petrol… Turkey also has many strong aspects in regards to technology.
'LET'S ERASE ALL PREJUDICES'
"In addition, we are quickly acquiring nuclear experience. In health, we have brainpower and technology. There is serious strength in tourism. The only thing lacking is our self-confidence. Also, the years of prejudice… We absolutely have to erase them."

On the way to our second stop in a series of visits by Prime Minister Erdoğan to the Gulf nations, we had the opportunity to chat with the premier. When I say 'we', I mean me and nine other colleagues.
Erdoğan was losing his voice; after all he had spent last week in minus 10 and 15 degree weather where he might have caught a chill during his rounds in Erzurum, Sarıkamış, Palandöken and Kars.

DURING THE TWENTY MINUTE CONVERSATION, HE FIRST ASSESSED THE MEETINGS HELD IN KUWAIT
"The event is primarily based on economics, however of course; there is also a political aspect when it comes to the point of solidarity. We need to have the courage to take collective steps. We are actually self-sufficient.
The Islamic world's share in the global economy is at 30 percent. Islamic nations, of which there are 57, are self sufficient on the grounds of what they already produce and are going to produce. As Turkey, we have a lot we could convey to them in the area of contracting. They also have a lot that they could relay to us. For example, petrol, they are very powerful when it comes to petrol. Turkey also has many strong aspects in regards to technology. Not to mention the fact that both Malaysia and Indonesia are advancing technologically. Furthermore, we are very quickly acquiring nuclear experiences. In addition, the health industry, we have both brainpower and technology. Tourism no longer consists of just sun and sand; and we are very fortunate in terms of destinations points. Education, culture, health, thermal, rural, conference tourism… Turkey has great strengths. Other Islamic nations also have prosperous tourism options. What we want is for visa regulations to be lifted and for our people to converge. In automotives, Turkey has broken their record in exports. Foreign sales in 2009 were at 629,000, in 2010, they reached 754,000. Automotive companies now want to manufacture their own brands. And we encourage this. We will do all that we can for one hundred percent domestic automotives. It is obvious where we have come in the aviation industry. Turkey will produce airplanes, helicopters and unmanned aerial vehicles for the 100th anniversary of the Republic. This is what they are expecting of us around here (the Islamic world).

The only thing lacking; is self-confidence. Also, the years of prejudice, hearsay that has made its way into neighborhoods, misinterpretations based on expressions. There are even biases present in school textbooks. We have to clear these biases and must erase them.

Question: The nuclear issue with Iran is also of close interest to the Gulf States. Did they ask you to provide an assessment?
Our approach to the nuclear crisis with Iran and our joint stance with Brazil has been met with admiration in this region. They congratulate our position.
* Has Kuwait been able to improve relations at all with Iraq, after their invasion 20 years ago?
Right after we left, Kuwait Prime Minister Sheikh Nasser flew to Baghdad to meet with Iraqi Prime minister Nouri al-Maliki for a four-hour meeting and then dinner.
* In an address by Turkey's Exports Assembly Spokesman during the Turkey-Kuwait Business Forum, complaints were made regarding the obstacles and bureaucratic issues faced while doing business in this geography. Have these issues been surpassed?
Our businessmen have one main duty; and that is to not lose contact with the businessmen they meet here. They need to follow up. We are going to form a 10-15 member special assignment team. There will be ministers amongst them. One by one, we will lift all obstacles.
* Why hasn't this happened up until now?
I see a void. We are lacking self-confidence. Not only do we lack confidence, but they lack confidence as well. I believe it will be different in the new generation.
* Will the lifting of visa regulations in the Middle East become an alternative to the EU's Schengen visa?
I don't see it as being an alternative to the EU. We started it off as the ECO (economic collaboration between Turkey, Iran and Pakistan) however it has expanded. It is now becoming even more effective and other nations may also join in.