Documents recovered from Golcuk base added to Balyoz case 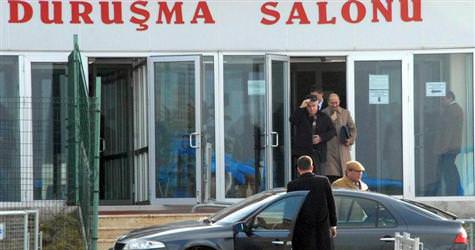 Copies of the Balyoz coup plan and new evidence found in the search conducted last month in the Turkish Naval Forces headquarters have been submitted to the court.

A number of documents and cd's, which were seized from Turkey's Naval Intelligence Department Headquarters have revealed further details regarding a series of plans prepared in 2003, to stage a military coup. These documents, which were found located in a secret compartment under the floorboards of an office in the naval base, will be distributed to prosecutors next week.
"IT ALL FIT INTO 195 CD'S"
A written notice delivered by the police department to the court, verifies that the 195 cd's of documents and 36 files recovered in the Golcuk raid are valid and detail a series of plans drafted in 2003 to overthrow the government, which are codenamed, Balyoz, Çarşaf, Oraj, Suga and Sakal.
'PREVIOUSLY UNCOVERED EVIDENCE VALIDATED'
During yesterday's hearing, the seventh for the Balyoz case, Judge Diken announced that the new evidence and documents confiscated in the Golcuk raid had reached the court. Judge Diken also revealed that while some of the documents were identical to those already in the file; there were also a number of files that were new to the case.
What exactly were they planning?
Allegations are that the Balyoz plan, supposedly prepared in 2003 by members of the military, was intended to bring down the government. Other plans, such as those entitled Oraj, Suga, Sakal and Çarşaf contained events and plans of action with the purpose of establishing the groundwork for a coup. The Oraj and Suga plans supposedly dealt with using the air field and continental shelf to ruffle relations with Greece. With tension rising, the First Army Command would have to call for Marshall Law in Istanbul and its surroundings. According to claims, the Oraj Plan involved having a Turkish fighter plane bring down a Greek warplane. If this were not possible, then a plane from Turkey's Special Fleet was supposedly going to be used to hit one of our own warplanes. In the Sakal Plan, supposedly a bomb was going to be placed under the fountain located in Istanbul's Beyazıt Mosque, which would have exploded just as the Friday prayer began to be read. The Çarşaf Plan supposedly intended to place a bomb in the entrance of the Istanbul Fatih Mosque, where worshippers leave their shoes. The bomb was going to explode at the end of the Friday prayer to result in creating complete chaos.