'Their entire lifestyle is under our guarantee' 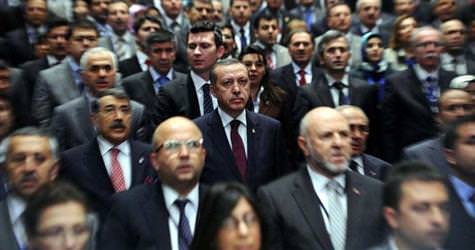 Erdoğan spoke harshly about recent events currently occupying the agenda, spanning from new alcohol regulations to the debate surrounding the release of Hezbollah members, and asserts that they are part of a campaign directed at the AK Party.

During an address to AK Party District Chairman, Prime Minister Tayyip Erdoğan, qualified the recent debate which has surfaced regarding the monument in Kars, new alcohol regulations, the Magnificent Century series and Television and Radio Supreme Council (RTÜK) regulations and the recent release of suspected Hezbollah members as being a smear campaign directed towards the AK Party. "People drink themselves sick and we don't interfere. Have we torn down a single statue in the past eight years?" Erdoğan emphasizes, "The issue is something else." Describing recent events as a smear campaign due to the approaching elections, Erdoğan went on to deliver the following messages during a meeting of Justice and Development Party District Chairmen.
• (Magnificent Century) Confidentiality is very significant to us. The moral values of historical figures are extremely important for us. We are a deeply rooted society and state. We are people who have built a civilization and are the very description of civilization.
• We are just as democratic a party as we are conservative. We are a party that provides the widest freedoms without limiting anyone's beliefs, devotions, eating or drinking. Our sincerity on this issue has been tested for eight years now. The minutest issues are exaggerated and suddenly it turns into a regime change issue.
• Certain people are attributing us to secret agendas and objectives. In eight years, what freedom has been restricted? Other than expanding areas of freedom, what other lifestyles have we intervened in? Whose lifestyle or dress style have we intervened in? Everyone dresses as they like, has fun however they like and drinks whatever they want. To who have we ever said how much wine or beer do you drink? Have we ever brought up such issues? They drink till they are sick and we don't say anything.
• Who is it that is getting caught in car accidents? Should they not be apprehended? Should they not have to pay for what they have done? Are we supposed to pay for their actions with deaths and injuries? What have we restricted in terms of their lifestyles? They say however that the AK Party is making restrictions, assimilating neighborhood pressure.
• (Regarding Oktay Ekşi joining CHP) Up until now what politician or party has been subjected to this amount of denigration, as has the AK Party government, ministers and families? However, those who are responsible for the highest form of insult and pen them in their columns are awarded a political badge and then you go and say that there is no freedom in this country.
• The CHP Chairman is using the Television and Radio Supreme Council (RTÜK) regulations to lash out at us in the harshest manner. Wouldn't someone check before they go ahead and accuse of something? The regulation in question was put in place while CHP was in power and it grants the authority, if necessary, for ministers or the Prime Minister to halt a broadcast. The present CHP Chairman is unaware of this. And obviously no one informed him. Now, he goes and holds us responsible for regulations his own party established. He blushes from decency, however unfortunately, we are face to face with an opposition that blushes and then places decency on the shelf.
• (Hizbollah releases) We see that due to the release of suspects in an open case, media organs are arousing suspicions and attempting to make connections of some sort of link between the organization and the government. We also see that the bill for the process is being handed over to the government. Is it the government that ruled for these releases? The judicial system made the decision. Once again, the issue involves a whole other organization.
• We want to move the judicial system to the front garden, rather than have it remain in someone's back garden. God willing, we will switch to a judicial system based on conscience and not on the whims of certain individuals.