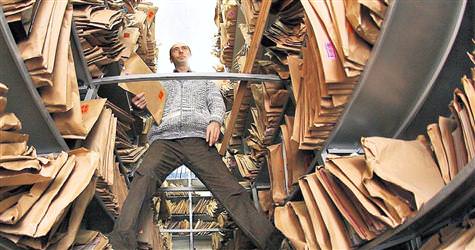 The government is initiating a number of steps to lighten the heavy work load left to the judiciary. Having been on the agenda since 2008, the ‘Mediation Law Draft’, is being taken off the shelf as Turkey’s Grand National Assembly Justice Commission hopes to legally enact the draft in February.

BOTH SIDES WILL BE CONSULTED
According to the draft, simple legal disputes between citizens concerning issues such as rental or contract agreements will be handled through an intermediary system and thereby settled out of court. The individual selected to act as mediator will separately meet with both parties as well as all together in order to reach a solution to the issue at hand.
IT WILL NOT BE A CASE ISSUE
If a settlement is reached, then the issue will be closed and the judiciary will not have to deal with the file. However, if an agreement is not reached, then the issue will be taken to court. In this way, the government is providing the opportunity for small disputes to be settled without having to occupy the courts. In return, the courts will have more time to be able to handle the larger files in waiting. This system is in place in the United States as well as 15 European countries, including Britain. The civilian mediators selected will have to be university graduates and will receive special training.
The following is a list of further details on the draft:
AN INDIVIDUAL CAN CHOOSE THIS OPTION: The Ministry of Justice will be establishing an "Intermediary Department Chairmanship". This department will be responsible for conducting mediation. Just as a judge will be able to direct both sides to a mediator, both sides may also make the request of their own volition to have mediation assistance.
SIMPLE DISPUTES: Mediators will try to reach solutions through compromise on disputes ranging from such issues as rental or contract agreements. The mediator will not be making a legal ruling, but will assist in establishing communication between the two sides and will provide a solution through compromise.
BOTH SIDES HAVE THE RIGHT TO CHOOSE: Both sides will be able to select one or more mediators. The mediators will be able to meet with both sides separately or together or will simply establish communication. The mediator will not be able to later act as attorney for either side.
THE RIGHT TO WITHDRAW: Both sides retain the right to apply for an intermediary, to continue with the mediation process and to either reach a solution or to withdraw from the entire process. Any suggestions made or allegations accepted during the mediation process will not be allowed to be submitted as evidence to use against either party later in court.
MEDIATION COURSES TO BE OPENED: To become a mediator, it is not required to be a law school graduate. Being a graduate of a four-year university program will be sufficient to become a mediator. There will be required training in mediation as candidates will have to pass an examination held by the Ministry of Justice.
MEDIATORS WILL BE TRAINED: Special courses will be opened through permission granted by the Department Chairmanship for mediation training. The courses will focus on communication techniques, methods for negotiation and discord as well as behavioral psychology. Law school graduates will be required to undergo 150 hours of training, while other graduates will be required to fulfill 250 hours.
NO JUDICIAL AUTHORITY: When necessary, legal jurisdiction will only be provided by a judge; a mediator will not be able to fulfill such duties. Mediators will be added to the Ministry of Justice's soon to be established mediator registrar. In addition, clients may access information regarding the mediators, which will be provided on the internet.
NO STATUTE OF LIMITATIONS: When a case is opened, and the sides then state they will be applying for mediation, the trial will be postponed for three months. This time period may then be extended for an additional three months in the case of both parties applying for mediation together. This time frame will not be subject to a statute of limitations or any period which results in the relinquishing of rights.