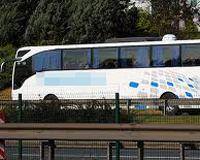 Four buses carrying 200 passengers came under fire on the Ankara - Istanbul TEM highway. The perpetrators and the reason behind the shooting, which took place 60 kilometers’ distance from the capital, have yet to be determined.

According to the information obtained, bullets hit the four buses, breaking the windows of one and cracking the glass of the others. Some of the passengers vacated the bus after the incident however some remained on board trying to overcome their shock. Passengers reported hearing the sound of an explosion and explained that they thought a rock had hit the windows. One passenger explains that it was when they saw a number of buses pulled over and got off the bus that they saw bullet holes.
According to another passenger, "Because the windows were double paneled, the bullets went through one layer and then got stuck. Otherwise, the situation could have been much worse. We weren't able to see anyone because it was dark outside." Gendarmerie teams investigating the incident took photos of the damaged windows. Once statements were taken, the passengers and the buses departed the scene. Speculation is that the incident may have been caused by nighttime hunters.
This incident is oddly reminiscent of another represented on film by Mexican Director Alejandro González Iñárritu in the film Babel. The film, which takes place on three different continents, has a scene in which Cate Blanchett's character is shot in a bus going through the dessert in Morocco with her husband, played by Brad Pitt.