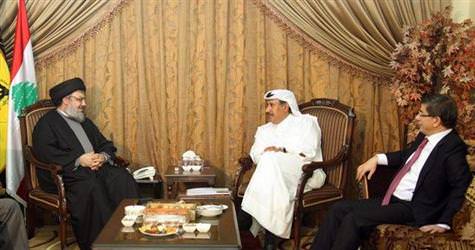 Qatar and Turkey held talks in Lebanon on Tuesday to try to contain the political crisis over an indictment in the 2005 killing of statesman Rafik al-Hariri which brought down his son's government last week.

The confidential draft indictment was issued at the U.N.-backed tribunal on Monday, deepening tensions in Beirut and alarming leaders across the region who fear Lebanon's sectarian and political divisions may spill over to the wider Middle East.

As fears of violence saw some Beirut schools close on Tuesday, Hariri's caretaker finance minister told Reuters that a deepening of the crisis could cause "immediate" economic damage.

Lebanese officials and Western diplomats expect the tribunal at the Hague to accuse members of Hezbollah, which denies any role in the assassination and says the inquiry into the suicide truck bombing in 2005 is serving U.S. and Israeli interests.

"As countries in the region and allies, we can't be observers to Lebanon being dragged into another political crisis," said Davutoglu, who met Iranian officials on Monday.

"We will hold talks with all political actors in Lebanon, including Hezbollah, which is both a political party and an organization supported to a great extent by the people."

Hariri, a Sunni, is backed by Saudi Arabia and Western powers, including the United States, while Hezbollah is supported by Shi'ite Iran and by neighboring Syria.

"Clearly Syria and Iran are on one side, Saudi Arabia and maybe the United States on the other," said Paul Salem, head of the Carnegie Endowment's Middle East Center. "Turkey and Qatar have traditionally been trying to hold the middle."

In a nod to regional linkages, Davutoglu said Turkey wanted to prevent the Lebanese crisis from negatively influencing talks later this week in Istanbul between six world powers and Iran over the Islamic Republic's disputed nuclear programme.

Turkey, fast emerging as an indisputable power, with links to the Europeans, Americans and even the Israelis, may play a neutral, moderating role alongside Qatar, a tiny gas-rich Gulf state trying to punch above its diplomatic weight.

Standard and Poor's downgraded Lebanon's outlook to "stable" from "positive."

Growth and reforms could be harmed if the political impasse continues, caretaker Finance Minister Raya al-Hassan told Reuters. She said if the crisis became a "security crisis" then the economy would be hit immediately.

The Central Bank, which has foreign reserves of more than $30 billion, said it remained committed to the stability of the Lebanese pound.

Lebanon has enjoyed strong growth in recent years but its "unity" government already suffered months of political paralysis before it collapsed last week. It failed to get the 2010 budget through parliament, or launch significant reforms.

In May 2008, armed supporters of Hezbollah took over parts of Beirut after government steps to shut down its private telecommunications network and curb its control at the airport. Dozens of people were killed in fighting across the country.

In an eerie echo of that showdown, black-clad men appeared briefly on Beirut streets on Tuesday and nervous parents hastily retrieved their children from school.

Consultations among Lebanese politicians on forming a new government, due to start on Monday, were postponed for a week. Hezbollah, which had demanded Hariri cut all Lebanese links with the tribunal, says it will not back him for another term.

The contents of the draft indictment, which will now be reviewed by pre-trial judge Daniel Fransen, were not revealed, and details of the charge sheet may not emerge for another six to 10 weeks, when Fransen is expected to decide whether there is enough evidence to proceed with a trial.

Tribunal prosecutor Daniel Bellemare said in a televised message released on Tuesday that the tribunal's work was just beginning: "To those who did not expect this day to come, I would say that while justice may be slow, it is deliberate."